Share All sharing options for: 4 Things Doug McDermott Has Shown in Summer League

Doug McDermott has had a very surprising and perplexing summer league performance.

Last year as a rookie, McDermott dominated summer league and followed up with a disappointing, injury-marred regular season. Nobody quite knows what to expect from McDermott this year, but here's what he's shown so far:

1. His 3 Point Shooting is Still Inconsistent

The Bulls traded 5 draft picks to nab McDermott on draft day because they felt he was ready to contribute immediately as a 3 point threat.

McDermott struggled with his 3 pointers as a rookie, shooting only 31.7%. Part of his struggles might be due to a meniscus injury which he played on - his 3 point shooting improved considerably post-surgery (23% pre-surgery, 47% post-surgery).

Question marks still remain about how consistent of a shooter he can be though, and his summer league play has only added to these doubts. McDermott is shooting only 9.1% from 3 through the Bulls' first four games. His shooting has been all over the place throughout his career, and summer league is only adding to these woes.

2. What Happened to his Free Throws?

Another puzzling facet of McDermott's shooting is his free throw percentage. McDermott was an outstanding free throw shooter in college, nailing 83% of his shots at the charity stripe at Creighton. He struggled mightily in his rookie season, shooting just 67% (10-15). While one might attribute this to a small sample, he has continued his struggles in summer league, where he is shooting just 55.6% (5-9).

McDermott was also great in college at getting to the free throw line. In his last two years of college ball, he shot 6 free throws per game. That number plummeted to 1.7 attempts per 36 minutes as a rookie and is up a little bit to 2.25 attempts in about 31 minutes per game in summer league. McDermott is showing much more aggression in getting to the basket in summer league, so hopefully his free throw rate continues to climb up to respectability.

3. McDermott as a Stretch 4

McDermott was projected as a small forward coming into the league and Tom Thibodeau played him almost exclusively there. McDermott and Hoiberg both feel he can play as a power forward though. He recently told Bulls.com writer Sam Smith:

"I think I can play stretch four in the NBA. I played a lot of four in college and I think it’s something that can work because I am really comfortable with it. We have guys like Niko (Mirotic) and that’s his place. But I also think we can play together and do pick and pop type stuff. Watching the Finals, watching high school teammate Harrison (Barnes), I’d never have guessed he’d be at the four. But there he is out there starting in the Finals at the four. That gave me a lot of confidence because he’s a guy who played the three his whole life and would never want to go to the four. But he was almost liking it more because of the matchups. I feel I can do the same.

McDermott has been bulking up to deal with the increased physicality of NBA play. He told Smith:

McDermott has been showing off some nice post moves this season as well, proving that he is more than just a 3 point shooter.

Coach Hoiberg has encouraged the entire team including bigs like Bobby Portis and Cameron Bairstow to shoot a lot of 3's to improve spacing on the offensive end. Don't be surprised if he trots out McDermott as a 4 in small ball lineups during the regular season to maximize spacing.

4. McDermott at the rim

Doug McDermott has demonstrated a very impressive ability to finish at the rim throughout summer league. He's been very aggressive in attacking the basket and had nice body control in scoring in traffic over defenders. Here are his highlights from his last summer league game against the Cavs, where he shows off these skills:

Although McDermott has shown great touch at the rim during summer league, there are still questions about if this is sustainable throughout the regular season against better competition.

McDermott was very poor as a rookie last year finishing in the paint. He shot 56% on shots within 3 feet, which was the 11th-worst on the Bulls last year. His shot chart reveals that he was well below average around the rim: 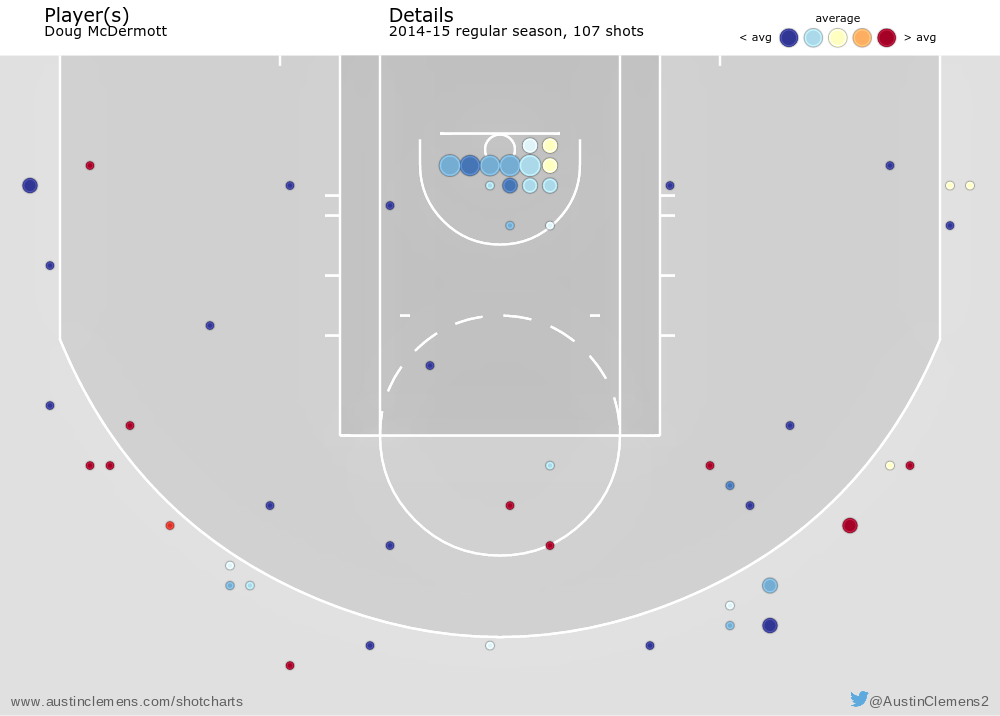 It's not clear what the situation is with McDermott's improved finishing at the rim. Is it a result of weaker competition or has he gotten better with experience and added muscle?

The jury is still out about McDermott, and he'll try to prove himself again in the upcoming season. He must be more consistent from 3, regain his free throw shooting stroke, and prove he can finish over NBA defenders to realize his full potential next year.