Derrick Rose has been a bad 3 point shooter throughout his career. The only person who still might argue against this point is Derrick Rose.

How much is his 3 point shooting hurting his overall game though and his team?

In case there is anyone that still thinks Rose is a capable 3 point shooter, the absolute best he's ever shot in his career is 34%, in an injury-shortened season in which he played only 10 games. He's a 30% shooter for his career. He has shown, consistently, in the six seasons he has played, that he is not good at these shots: 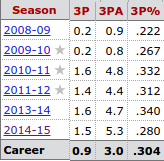 Last year, he was embarrassingly poor. Of players who shot at least 250 3's (Rose attempted 271, more on that later), Rose was dead last in percentage, clocking in at 28%.

Any way you slice it, 3's by themselves are not efficient shots for Rose. Exacerbating this problem is that Rose showed no conscience whatsoever in holding back from chucking 3's.

Despite being one of the worst in the league, Rose shot 5.3 3's per game. That was the 22nd-highest mark in the NBA. The average % of the shooters ahead of him was 37.8%. Those guys took a lot of 3's because they were good shooters. Rose took a lot of 3's and was making them almost 10% less often than the select few who had a bigger green light than him.

Effects of 3 Point Shooting on Scoring Efficiency and Winning

Derrick Rose struggled in shooting efficiency last season. He was 9th on the Bulls in True Shooting Percentage at 49% and in the 31st percentile in the NBA.

Not to belabor this point too much, but what killed Rose's season from an efficiency standpoint was he was terrible at 3's and took a massive amount of them.

What Would Rose Look Like Without So Many 3's?

If you were to subtract all of the terrible 3's from Rose's season last year, he would have much, much better numbers.

If we recalculate his True Shooting Percentage, taking away all of his 3 point attempts and the subsequent points he scored, Rose's true shooting percentage would go from 49% up to 56%. He would go from the 31st percentile all the way up to the 81st percentile. He would become a much more efficient player.

Rose was still elite at many things last season. He was in the 90th percentile in isolation scoring. Among players with at least 200 drives, he was 12th overall in FG% on those plays at 52.7%. There are still a lot of things that Rose did great last year, and we can reasonably expect improvement as he gains form with more playing time.

However, there is absolutely no reason to believe that he will ever become good at 3 pointers because he wasn't good at them in the first place and has shown no improvement in six years.

If Rose can stick to what he does best - attacking the rim via drives and scoring in isolation off the dribble - he can regain the form that made him a three-time All-Star. The signs were there last year, but they were clouded by the barrage of 3 point attempts that ruined his season from a statistical standpoint. He's a lot closer than people may think, and he can get even closer by reining in his shot.