[Thanks to Jeff for today's game preview -yfbb]

As the Memphis Grizzlies, the current #2 seed in the West, roll into the United Center tonight, it’s important, given recent circumstances, to digest what exactly has happened to the Bulls during the last 21 games. Just when you thought the season couldn’t get any weirder, it has. Early in the season it was the loss of Noah and Dunleavy to injuries for extended periods of time that hurt the team flow. It was the "will he or won’t he" play from Rose, then once we found out he would play, it was the "will he or won’t he" decide to take ten three-pointers in the first ten seconds of the shot clock. It’s as if consecutive losses to the Pacers and Spurs following the dramatic Thunder victory last Thursday night could have been expected given the way the past month and a half has gone. Here’s the timeline of the ebbs and flows since January 25th:

January 25th – As a follow up to two of the most impressive wins of the season (1/23 @ DAL, 1/25 vs. SA), a Sunday afternoon dud at home against the Heat as Hassan Whiteside jumped onto the national radar.

January 29th – Following a thrilling victory in overtime on the road against Golden State (36-6 at the time), the Bulls stooped to a new low in a double-overtime loss to the putrid Lakers which was the start of a three-game skid.

February 20th – Head into the All-Star break on a four-game winning streak including a convincing win without Butler over the less than interested Cavaliers. Though during this time, voices get louder about Thibodeau and Bulls management being at odds, particularly about the playing time of Doug McDermott. McDermott plays a total of five minutes in blowout victories over the Pelicans and Kings. The team comes out of the break losing to a Detroit team that started a rookie PG (Spencer Dinwiddie) and had a short bench due to recent trades.

February 24th - Beat the Suns and Bucks handily in back-to-back wins. Lose Rose to another unexpected knee injury. March 1st - Jimmy Butler has one of his best games of the season putting up 28 points and 12 rebounds, while holding probable Rookie of the Year Andrew Wiggins to 14 points. Butler leaves the next game against the Clippers in the 3rd quarter as the Bulls grip to a one-point lead, only to lose the game.

March 8th - Withstand a Russell Westbrook assault on the senses and beat the Thunder. Lose consecutive games on the road allowing a woefully undermanned Pacers team to make 33 trips to the FT line and gift the Spurs 20 turnovers.

We’ve seen ups and downs like this through the Thibodeau era mainly due to injuries and exhaustion as the seasons have winded down. The truly troubling part about this stretch is that the inconsistencies began happening before the injuries. In previous incarnations of the roller-coaster of drama with this team, the difficulties occurred due directly to the injuries. But the one constant in all of this is the amount of importance placed on every single regular season game by Thibodeau. His mentality is laudable, but is unsustainable and unrealistic in a league that places almost all of the emphasis on the postseason. Pushing players and keeping your starters in the 4th quarter during a meaningless game against Sacramento in February is not how this league works.

The Grizzlies have suffered from the same sort of game-to-game inconsistencies recently that have befallen the Bulls. Beat two, tough Western Conference foes (the Blazers and Clippers) on the road. Lose to the Kings on the road and the Clippers at home. Beat the Wolves on the road, lost to the Jazz at home. Beat the Rockets on the road and the Lakers at home, lost to the Pelicans on the road. Going 5-5 in a ten-game stretch. But in the Western Conference, where teams are bunched up like a NASCAR race, one mediocre stretch could send things out of control. The up-and-down results for the Grizz may be similar to those of the Bulls, but the causes are drastically different. For one, their woeful outside shooting is becoming a bigger problem than ever before. Even in 2012-2013 when they made the run to the Western Conference Finals before losing to San Antonio, they shot 32.4% from deep. That just has never been who they are. They are a grind it out team that relies on the orchestration and savvy of Mike Conley combined with the brawn and instincts of Randolph and Gasol down low to offset the lack of offense at the SG and SF positions. But now, with teams becoming more adept at taking away what the Grizzlies do well, the other piece that should be there to balance their offense isn’t. Vince Carter, who was signed in the offseason, has been hurt, Courtney Lee lacks the consistency necessary to knock down open shots and Jeff Green is not a shooter. The team is shooting 28% from 3 since the All-Star break and there doesn’t appear to be a reliable solution on their roster. People have concerns about the Hawks and Warriors keeping up their winning given their reliance on the 3-pointer, but in my opinion, to have the wings almost completely devoid of a consistent 3-point shooter in today’s NBA is even more unique.

The other issue for the Grizzlies has been the significant drop off on the boards. Here’s a look at their rebounding percentages (% of available rebounds) during the Gasol/Randolph era. 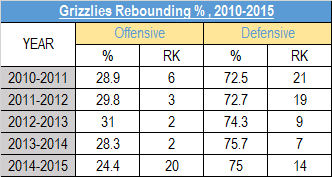 Never before have they ranked outside the top 10 in both categories. A part of this could be attributed to the age of Randolph and Gasol (33 and 30 respectively), their lack of athletic ability relative to their peers at the position, or the fact much of their time is spent away from the basket as they are not your traditional bangers down low, but their season rebounding percentages are not far off from those of their career. It’s the lack of depth up front that is starting to show. Kosta Koufos is the only reliable big the Grizzlies can throw at teams, which when you take that with the advancing miles on the tires of Randolph and Gasol, could spell trouble as this season rolls along.

Memphis is a great matchup for the Bulls. The lack of offense on the wings for the Grizzlies helps the lack of defensive depth the Bulls currently have there with Butler out. It means the Bulls can be more aggressive attacking Conley off the pick and roll with little fear of being lit up from three. Also, the Grizzlies have no one on their roster that can matchup with Mirotic given the way he has played lately. I wouldn’t be surprised to see Thibodeau throw Mirotic out there for a stretch with Gasol and Noah. But whether or not they will win, who knows.

The NBA season simply due to its sheer length and the fact every team has the talent necessary to win a game at any time will give you some moments that appear on the face to be unexplainable and unimaginable. But as the season winds down and playoff jostling hits its apex, the Bulls need to settle into the team that can steady itself, tread water until the return of Rose, Butler and Gibson, and hopefully not fall below the 3rd seed in the East. A win against Memphis tonight would go a long way.