Share All sharing options for: Jimmy Butler slated to return against Hornets tonight

[Thanks to Jeff for today's game preview -yfbb]

Just as I was starting to put pen to paper (or in actuality, fingers to keyboard) to prepare the game preview for the Bulls’ 2nd game against the Charlotte Hornets in 10 days, news came through the pipeline that Jimmy Butler will be making his much awaited, and needed return, from an elbow sprain that has kept him out of the team’s last 11 games. The Bulls have gone 5-6 during this period.

Before I get to Butler, there are a couple of points to address. To say the Bulls loss on Saturday night in Detroit could have been predicted, is too simplistic. The template this season in back-to-back games is that the Bulls will come out with a strong performance in the 1st game with a 2nd game letdown, in which the team looks lackadaisical and a shell of its former self from the previous night. But is this theory backed up by the numbers? 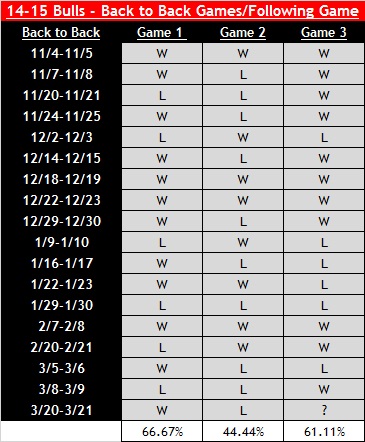 Fatigue, travel and the way Thibodeau manages the roster, may be the largest causes for the 23% drop in winning percentage, but the exact root requires more drilling down. More important is whether it affects the Bulls more than other teams. Here’s a peek at the Bulls compared to the Top 10 teams in the league by winning percentage and how their winning percentage falls off in the second game of back-to-backs. 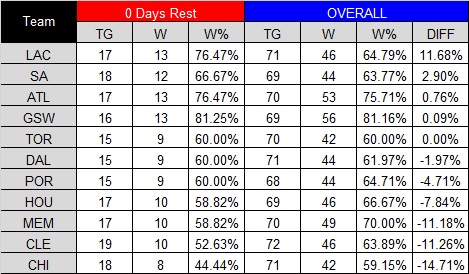 The Bulls see the biggest drop offs in back-to-backs. As I mentioned before, outsiders can speculate to the cause, but we will most likely never be able to truly pinpoint the cause. The main reason for bringing this up now, is that when they do get rest, the Bulls do bounce back, as their 63% winning percentage with at least one day of rest shows.

Ten days ago, the Bulls faced off against these same Hornets with both Al Jefferson and Cody Zeller, their top post scorer and their most versatile big man, out of the lineup. Despite their absences, the Bulls were destroyed on the boards 55-36 as six Hornets players pulled down at least seven rebounds. That’s hard to imagine with players like Pau Gasol and Joakim Noah, who excel in that precise area, but this is just another example of those unimaginable sleepy moments the Bulls are prone to. They had 1 day off in this situation, but the game before was the horrific overtime win against the 76ers in which both Gasol and Nikola Mirotic saw 42+ minutes, the five starters all played at least 36+ minutes and only nine players saw action in a contest that should not have been treated like Game 7 of the NBA Finals, especially considering Noah was already sitting out. And if you think I’m championing a loss to the worst team in the league when you’re already sitting out one of your starters voluntarily, I am.

Butler’s return to the lineup can’t be underestimated right now. His absence has pushed the boundaries of playing time for the other Bulls’ options on the wings. Players like Tony Snell, E’Twaun Moore and Doug McDermott have received valuable playing time, but along with Mike Dunleavy and Kirk Hinrich, their effectiveness could benefit from a reduction in role and playing time. Any offensive possession that can funnel through Butler as opposed to the other perimeter options that don’t look to attack as often as he does is a plus for the Bulls.

So what will happen in this one?

With the return of Butler and Taj Gibson, the day off and the fact the players weren’t grinded down to the bone in the loss to the Pistons, I expect the team to come out energized at home. I don’t expect the Bulls to shoot 37% from the field again and I don’t expect the return of Jefferson and Zeller will have as big of a positive effect as the Bulls returnees. The reintroduction of Butler and Gibson to the rotation means both a deeper bench and more creative lineup possibilities for the Bulls than in the previous matchup.

It’s hard to be optimistic about this team, but at this point, what else do we have? We’ve been disappointed enough.