Clippers come in for a Sunday nooner

Share All sharing options for: Clippers come in for a Sunday nooner

[Thanks to Easy Eis for today's game preview -yfbb]

What an unbelievably eventful (and unfortunate) week this turned out to be for the Bulls and Chicago sports in general. The Cubs began their ascent to the top of baseball by starting spring training, Patrick Kane shattered his clavicle, and the Bulls started their stretch to the playoffs with an embarrassing loss to Detroit, reassuring wins over Phoenix and Milwaukee, an ugly performance at home against Charlotte, and finally an even uglier win against Minnesota. But wait, there's more! Today, the 37-22 Chicago Bulls have the honor of hosting a 38-21 Los Angeles Clippers team currently in the midst of a four game roadtrip and looking for some payback regarding their previous matchup in November.

Now, you probably noticed I neglected to mention the latest Derrick Rose knee injury in my recap of this past week's events. It was certainly the most controversial and shocking of all the things I previously mentioned (even over losing to the Pistons) and it almost cumulatively put Blog a Bull in a state of chaotic numbness for a couple of days. People like to compare that news to getting punched in the stomach, kicked in the nads, what have you, but this was different for Bulls fans not only because there was no soul-crushing moment of recognizable knee obliteration, but because at this point Bulls fans and supporters of Derrick Rose in general have come to the collective realization that the basketball gods are playing some sort of cruel inevitable joke on him with these injuries. It's the same joke they've played on Penny Hardaway, Yao Ming, Brandon Roy, and unfortunately countless others before Derrick. For some sort of nonsensical reason incomprehensible to human logic, those that blessed us with this game decide they must also rob us of some of its best players. There is no word that summarizes the feeling this leaves us with better than heartbreak, and this was the third instance of Derrick Rose-related heartbreak in three years. Batting 1.000 is usually a good thing, but definitely not in this case. And while his post-surgery prognosis is both relieving and encouraging, we can only hope going forward that his overall health stabilizes for the playoffs and beyond.

So how do you stem the heartbreak? What strategies do you use to cope with Derrick Rose withdrawal? A lot of people enjoy venting on Blog a Bull which while dangerous in some instances is still healthier than other ways you could cope on the Internet, such as fighting against Derrick Rose knee-jokes and memes on twitter or, heaven forbid, participating in the comments section of ESPN articles about him. Personally, I love getting lost in any of his old games on Youtube (mostly from his MVP season) but I also enjoy watching games from the current season that many have already forgotten that should reaffirm just how good the Bulls are and how good they can be. One of these games from this season? The Bulls' previous matchup against the Clippers in Los Angeles; a game in which, quite coincidentally, the Bulls were also missing Derrick Rose and Pau Gasol.

Here's a quick rundown of efficiency stats that should paint a pretty good picture of this team if you're not familiar. The Clippers currently lead the league in offensive efficiency with a 110.2 rating while also ranking third in the association in both assist ratio (18.7%) and true shooting percentage (56.6%). Conversely, they are ranked 18th in defensive efficiency with a 104.1 rating and tie for 16th in rebounding rate at 49.6%. They like to dunk the ball a lot. They nicknamed themselves Lob City a long time ago. They are fun as hell to watch and an offensive juggernaut when they have it going and Doc Rivers leaves his son Austin in timeout as opposed to putting him in during a timeout. So how did the Bulls win the first time without two of their three best players?

Jimmy played a wonderful 45 (!!!) minute game despite shooting a mere 35% from the field. He made up for going 6/17 by getting to the freethrow line ten times and converting nine of his attempts. Jimmy also proved this game as he would later in the season that he's a sneaky great facilitator when he has a favorable offensive matchup. He was consistently abusing the smaller Clippers guards in the post for the entire game, and when they finally made the adjustment he was still able to beat them with his great passing out of the post:

In this game, they called on him to help pick up some of the offensive slack left by Rose and Gasol's absence, and even though he couldn't quite find his stroke, he found other ways to be successful (as all great players do) by getting to the line and making consistently sharp passes. His play of the game however was unquestionably when he Jamal Crawford'ed Jamal Crawford:

Not sure if you've heard, but the dude gets buckets.

2. Let Fly With The Threes

The Bulls are just flat-out better when they are putting up a lot of threes. Maybe not when Derrick Rose is putting up a lot of threes, but when the team collectively does it good things tend to happen. They're ranked in the top ten this season in 3-PT percentage (9th at 35.8%) but only 16th in attempts (1,241 total). The Clippers are one of the best 3-PT shooting teams in the league (37.1% shooting on 1,524 attempts, good for 4th and 6th overall respectively) but the Bulls managed to outshoot them this game both from a percentage and attempts perspective (10/26, 38.5% for CHI vs. 7/23, 30.4% for LAC) thanks to blistering spot up shooting from Mike Dunleavy and Kirk Hinrich. Making the opponent respect the three from a variety of areas also creates a ton of floor spacing. Look what happens to the court when Taj comes to set a screen for a ball-handler while three other 3-PT threats are on the floor. 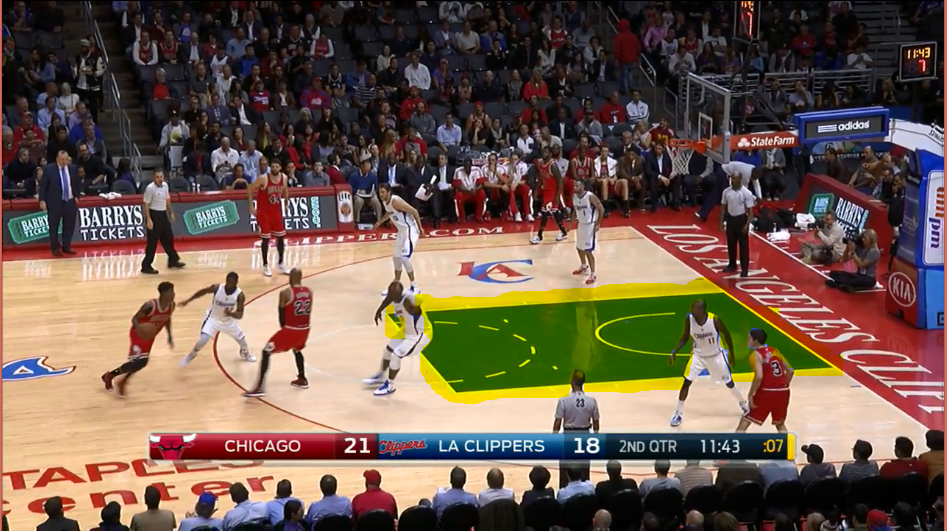 If that's Rose with the ball, Glen Davis is getting roasted like a Thanksgiving turkey on Derrick's way to the hoop. This is a trend that will need to continue not only through this game but throughout the rest of the season if the Bulls are going to be offensively competent this time around in the playoffs.

3. Our Bigs are Better Than Your Bigs

Joakim Noah, Taj Gibson, and a still blossoming at the time Nikola Mirotic combined for 43 points, 28 rebounds, and 14 assists in this game. They managed to outscore and out-assist all five of the bigs on the Clippers collectively despite not having Pau Gasol, the most offensively skilled of them all. Blake Griffin is still out with his elbow injury, and Taj is likely to miss this game as well. In addition, though DeAndre Jordan did have 17 rebounds, Noah himself had 16 and the Bulls big men simply outclassed those of the Clippers all night with their crisp passing. Noah and Mirotic were dropping dimes like this throughout the evening, and will need to do so tonight if the Bulls are to win this game as well:

Bonus: How Kirk Can Be Good Not Bad

It's the association's best kept secret (and Blog a Bull's worst) that Kirk Hinrich is not very good anymore. He'll have his seasonal national tv moments but usually stinks up most games he plays in these days. Even so, Tom Thibodeau insists on playing him an incessant amount of minutes to the chagrin of Bulls fans everywhere, and he logged 34 in this one because of Rose's absence. However, despite getting roasted by Chris Paul on a few possessions, Kirk played a great game and made several key plays on both ends, mainly because he played smart and played well without the ball. These are the two things that should make up the entirety of his game at his current age of thirty-four as opposed to the far too often seen dribble-chucks and hilariously bad turnovers. Not Bad Kirk (NBK) plays well-positioned and opportunistic defense while also limiting his transition offensive game to 3-PT shooting, two things demonstrated in succession below:

NBK also recognizes he can be more effective without the ball than with it at his age, and uses his savvy veteran knowledge and forces of grit to make intelligent cuts that get himself open for easy shots/baskets. Watch as he recognizes the elite two-way point guard Chris Paul cheating off of him and going for a steal to make a quick cut that sets up an easy layup:

Fundamental basketball. When NBK sticks to it, even at his age, he can burn you to the tune of 14 points on 4/6 shooting from deep, 5 assists, and 3 steals. Sadly, that was Hinrich's only two-point field goal of the night, as he went 1/6 from 2-PT range the rest of the way, mainly because he didn't look to make more plays like that one. When Kirk tries to shoulder too much of the load, and assumes too much responsibility even for a captain, the whole team feels its unfortunate effects.

We need to see more of NBK and less of the Captain going forward, especially if he's going to continue to play the minutes Thibs consistently insists on playing him. P.S: Kirk also Jamal Crawford'ed Jamal Crawford this game, I have no idea how this happened:

So there are the Bulls keys' to victory right there: Play through Jimmy Butler, shoot at least as many threes as the opponent, and rely on the depth of the bigs. That last one may be a bit tricky given that Pau has the flu and Taj suffered an ankle injury against Minnesota on Friday night, so its going to take strong efforts on both ends of the floor from Noah and Mirotic to get the job done. We might even get Nazr Mohammad or a rare Cobra Cam sighting at some point. \

The Clippers will be feisty, looking to avenge their previous loss to the Bulls, and also looking to improve their playoff seed given that they sit a game behind both Dallas and Portland for the 4th spot. They will come out aggressive and the Bulls will fall behind fast if they do not follow suit. That being said, the Bulls are starting to hit their stride defensively, and with some consistent offensive production and transition defense, I would expect them to come out on top at home.