Let me start off this fanpost by stating thanks to BaB poster ChiCity773 who showed me that I was pretty wrong about Taj's recent offensive decline. It won't be the last time I'm wrong for sure. It also motivated me to deep dive into Taj's stats and figure out what's going on with him.

At this point in his career, Taj Gibson's ankles are probably held together more by athletic tape than actual tendons and ligaments. He's sprained his left ankle 3 times and his right ankle once in the past 365 days alone. The most recent occurrence was against the Warriors on January 27th (he managed to come back in and finish that game).

Taj has sat 9 games so far this season in an attempt to rest his ankles. Since taking a two game break to rest his right ankle (12/15/14), he's played every subsequent game but has cooled off considerably to what was a very hot start to the season offensively for him. How much of his struggles can be attributed to his ankle injury is in doubt, but his offensive numbers across the board have for sure been down since that last injury.

Let's take a look at his basic statistics first:

We can see here from first glance that in slightly less minutes, Taj's FG% is way down on less attempts. His other stats are down a little too but the big drop in scoring efficiency is what is really concerning.

Next, let's take a look at his advanced stats:

Taj's TS% (adjusting for 3pt/2pt/free throws) is way down and his ORtg and DRtg are both way down as well. This coincides with the team's general slippage at this point in the season. The Bulls went 18-9 prior to Taj coming back from his ankle injury and are 14-11 since his December return date

Finally, let's take a look at his shooting chart.

You can see that his shooting at the rim and on jumpers is way down. The numbers at the rim are particularly alarming. Shooting 50% is not a good percentage for shots at the rim for a frontcourt player. His drop could be attributed to a lack of explosion he has on those ankles. For a frame of reference, Taj shot 64% on shots at the rim last year and started out this season around the same number before falling off dramatically in January.

You could see examples of this lack of explosiveness in the Bulls' game last night against the Kings. Here is a screenshot of Taj catching a pass from Rose with a wide open lane. Notice the distance he has between himself and the closest Kings defenders. Rather than going up for a dunk, he goes in for a reverse layup that he misses. 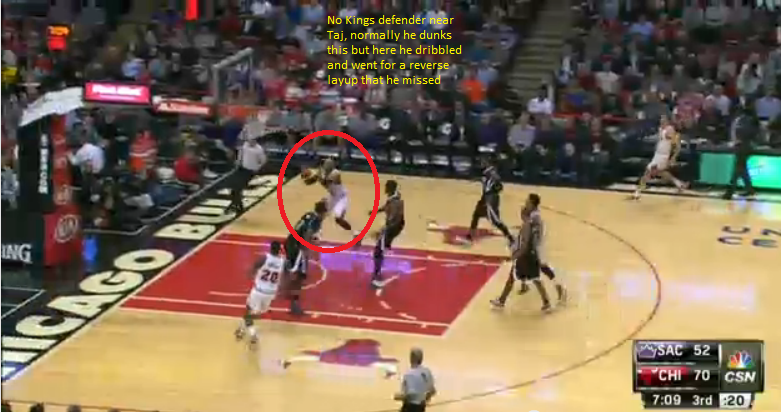 Taj got his own rebound after this miss and again had an open look at the basket. On the putback, he tried to dunk but lacked the explosiveness to get high enough and missed.

These are two situations where we are used to seeing Taj, who is a good finisher around the rim for his career, throw down a dunk or convert an easy layup. Missing both of these shots continues a concerning trend of not being able to convert at as high a percentage near the basket.

So what do these numbers mean for Taj Gibson? The team has been struggling as a whole recently, but Taj's offensive struggles are particularly concerning in the wake of more and more ankle injuries piling up on his body. Hopefully, with the all star break approaching, we will see the rest do him good and he can regain his earlier season form.