A day at USA Basketball practice with Derrick Rose

Share All sharing options for: A day at USA Basketball practice with Derrick Rose

This wasn't my first time hanging out with basketball players at Quest Multiplex on the city's west side. I've been lucky enough to cover the practices for the McDonald's All-American Game the last two years; the first one with Andrew Wiggins, Jabari Parker, Julius Randle and Aaron Gordon, the last one with Jahlil Okafor, Cliff Alexander, Emmanuel Mudiay and Karl Towns. I've been at the NBA Draft Combine the last two years as well, spanning a historically bad 2013 class to one that's essentially the polar opposite coming in this year.

I love covering those events because there's no better way to get a feel for particular players and the game as a whole than by being right next to it. I hope I can cover them every single year. There was something markedly different about being at Quest on Wednesday, though, and you didn't even need to enter the gym to get that sense.

As I was walking up for USA Basketball's first of two practices in Chicago ahead of Saturday night's exhibition game against Brazil at the United Center, there was a familiar-looking ESPN personality shooting a standup for SportsCenter. By the time the day was over and I was walking out of the gym, there were kids holding sharpies, wearing Steph Curry shirseys looking for autographs.

When NBA stars are in the house, it's just different. Instead of pointing to some gangly 17-year-old and telling folks he's the next James Harden, you can actually watch James Harden. His beard is even thicker, sweatier and grosser up close, you can believe that.

That's part of what made Wednesday's practice sort of surreal, at least for a humble stay-at-home blogger like myself. When Coach K finally let us in to watch practice, the scene was a bit jarring.

The first thing you see is the white board with the team breakdowns: 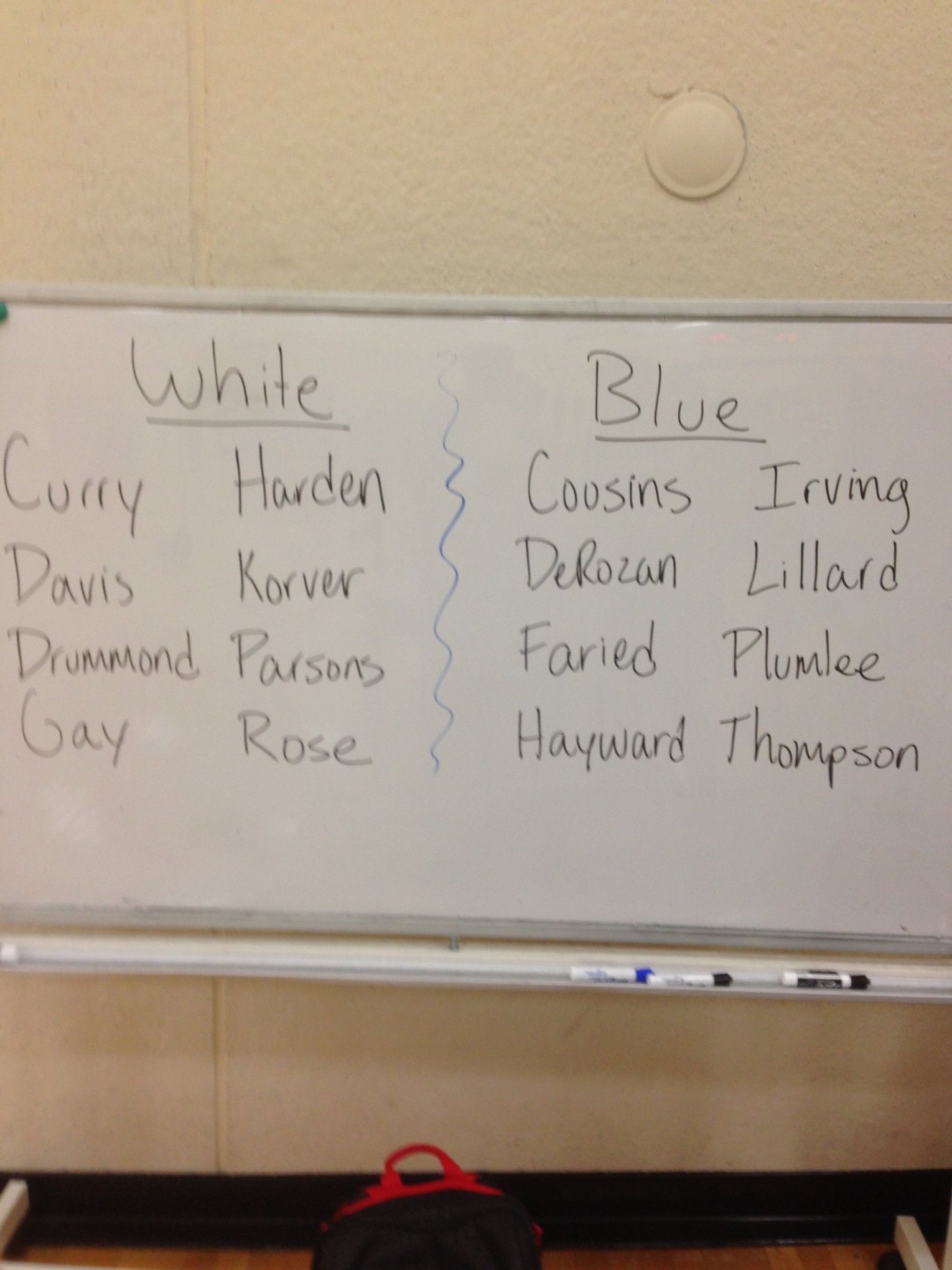 And then it's the players, right there in front of you, going hard at each other in scrimmage. It was great. D. Rose throwing cross-court passes to Steph. Kyrie putting on a ball handling show like only he can. Anthony Davis filling the lane like a pterodactyl swooping in from above. All of it was so cool to see up close. And then DeMarcus Cousins dove on the floor for a loose ball and started screaming in pain, holding his right knee.

I'll admit, it looked bad at first. Maybe I'm just conditioned to expect the worst from injuries at this point, my D. Rose-related scars still too fresh to consider any better outcome. Fortunately, Boogie would pop back up after a couple minutes, and it wasn't long before the other reporters were gossiping around that it probably wasn't too serious. It was enough for Coach K to call the scrimmage after about 10 more minutes, though, as the individual players filed to different parts of the gym to work on drills.

In one corner, Kyle Korver and Klay Thompson were drilling shot after shot from the baseline.

In the other, Davis and Rudy Gay hit one 15-footer after another.

On a court across the gym was D. Rose, with a little kid grabbing rebounds as the only other person on the floor. The media formed a half-circle around him and waited for Rose to finish doing his thing, first taking jumpers and then working his way in for floaters. Something about it just wasn't doing it for me; I don't know, I guess I've seen Derrick shoot in an empty gym too many times over the last two seasons to get excited about it. Eventually Rose would call it quits though and he began a pretty lengthy session with the media.

These things are always packed, and that's especially the case with national media in town. As a short man, I stand no chance. 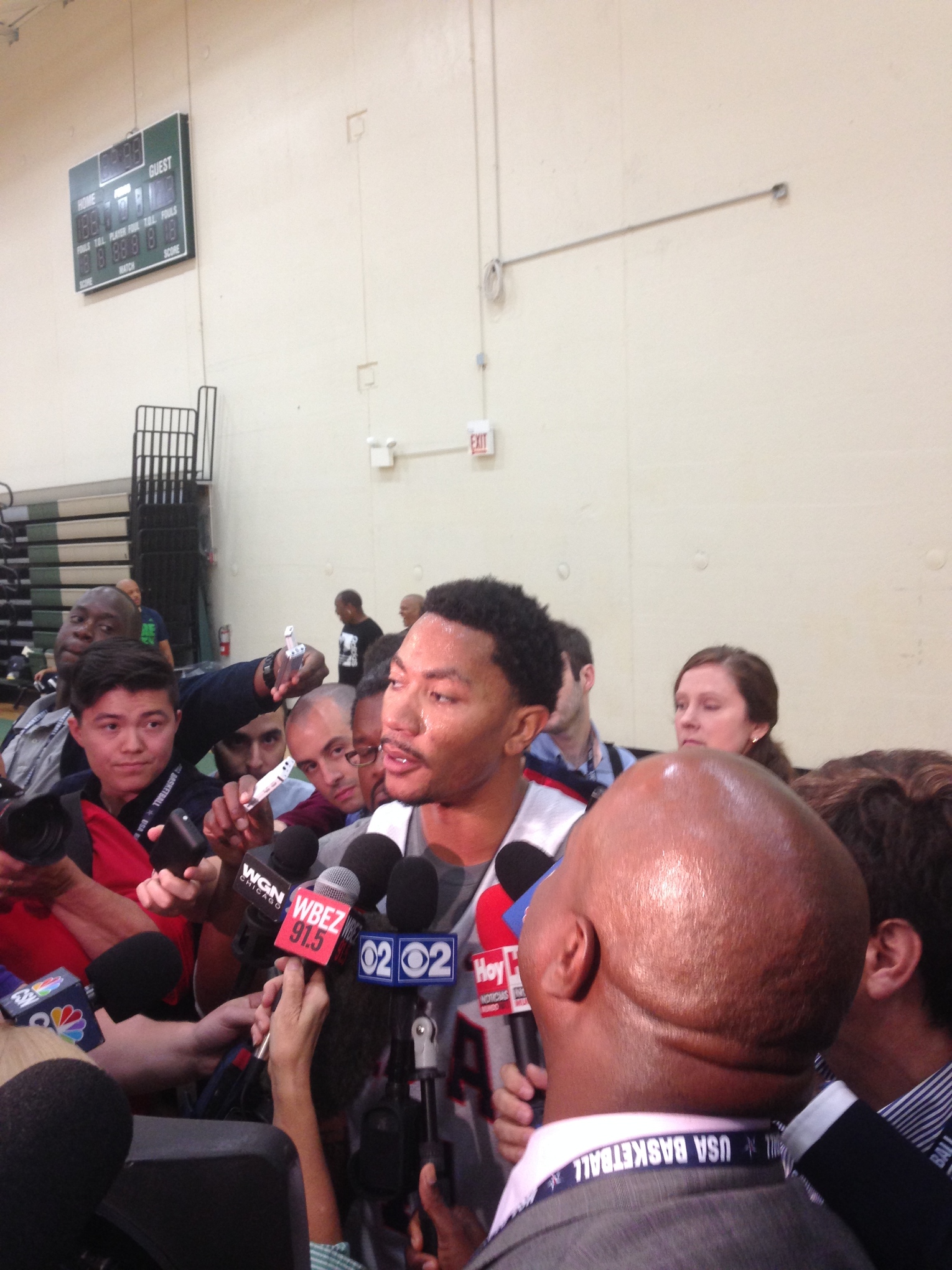 I was way back in the scrum, but I could still see Derrick's face and make out his responses. You can tell he's having fun with this experience. He seemed like he was in a really good mood.

There's no better way to get Derrick going than to ask him about Thibs, and it wasn't long because Rose started cracking jokes:

Funny Rose quote regarding Thibs' participation with Team USA. "It gives him something to do instead of being at the Berto spying on people"

Rose gave very good answers to real questions, too, like on what he's taking away from working with Team USA this summer:

"Playing, just playing pickup," he said. "I don't play pickup during the summer, so just getting in that rhythm, coming out here and knocking that rust off. My biggest thing is not turning over the ball."

I wrote about Rose's bizarre phobia of playing summertime pickup before this camp started. And yes, it still makes zero sense to me.

Here's what Rose had to say about getting older. Remember: he turns 26 in November.

"You talk to the older players who really study the game, that are students of the game, and they look at the game totally different," he said. "For me, I always had that natural feel for the game so I didn't have to look at film. But looking at that actually helps your game in a number of ways. You see things that you normally don't see."

The highlight was definitely when The Score's David Schuster asked Rose what he thought of the beginning of the schedule for the Bulls, with an opening game against the Knicks and then a Halloween visit from the Cavs. He had no idea the schedule was even out.

What do you think they were talking about?

I'll be back tomorrow and I'll be at the game on Saturday, too. Holler in the comments if there's anything I should ask.