Brooklyn resident and occasional Blogabull contributor Zach Lee went back to Barclays Center for the 2014 NBA Draft. What transpired was a strange series of events that left the Bulls with Doug McDermott , Anthony Randolph and a whole bunch of questions.

I didn't mean to yell that expletive at the top of my lungs. I really didn't. It's just that... it'd been such a good day.

The US men's soccer team had advanced to the knockout round of the World Cup, summer was officially in full swing in New York and a two week vacation was just beginning. It was a beautiful day that was meant to culminate with the 2014 NBA Draft at Barclays Center. The Bulls had the 16th and 19th picks and a deep draft to address their needs. The NBA draft itself is some of the weirdest fun professional sports have to offer. Things were good. Life was good.

I don't really remember much after I learned that the Bulls had selected Doug McDermott by trading both of their first round picks to the Denver Nuggets. Trying to pinpoint the moment when I learned Anthony Randolph would become the newest Chicago Bull feels like trying to remember the fourth time in my life I got kicked in the balls. All I remember is that it happened and I didn't like it.

McDermott seems well-liked by many, and he definitely fits a need as a shooter and a scorer. It's exciting to think about a player that not only can hit shots, but wants to take them. And articles like this one from his time with USA basketball and this ESPN insider breakdown really get the juices flowing. But in terms of draft bargaining savvy, GarPax basically walked into a strip club and handed two hundred dollars in singles to the first stripper they saw. The point isn't how pretty she might have been, the point is that's a really stupid way to spend two hundred dollars.

Once the transaction was reported, the quest for justification commenced at previously unheard of speed and scale.

- Not really. The savings between the 11th pick and the 16th and 19th combined are a relative pittance.

Then perhaps the Nuggets would give up something else to offset the inequity of the trade. Say a 2nd round pick?

- Nope. In fact, the Bulls gave up their 2015 2nd round pick to sweeten the deal for Denver.

Well certainly Denver must have given up something for all those assets?

The Bulls' acquisition of Anthony Randolph cannot be justified without the creation of a complicated NBA Rube-Goldberg machine that requires at least three farm animals to function. In what bizarre alternate universe does NBA washout Anthony Randolph crack Tom Thibodeau's circle-of-trust rotation? Which leads one to the thought that it must be Randolph's salary the Bulls wanted for trade purposes. Except then you find out he cannot be conveyed in a multi-player trade for two months due to CBA restrictions. What in the hell were the Bulls doing here? Why did they make a play for this guy? It's mystifying.

When asked why Randolph was in trade, Gar basically said it was Denver's idea & Bulls wanted McDermott, so they said yes.

Or completely unmystifying, as it turns out.

The reality was that the Bulls simply wouldn't be denied in their pursuit of Dougie McInsufferableNickname and apparently made that very clear to the team they were bargaining with, who then held them out to dry for more assets. That's bad business if true, and a misstep the Bulls seldom make. The Nuggets ended up taking the project center from Bosnia first and personal favorite and supposed lottery-lock Gary Harris with the 19th pick. Every draft analyst out there called the Nuggets brilliant and their moves a masterstroke. The unspoken commentary on the Bulls' dealings is there for all to see.

The draft is where the Bulls front office makes its hay, with a history of selecting quality rotation players from late draft positions, with an emphasis on maturity. Part of what made me so excited to attend the damn draft was the assurance that the Bulls would be more involved than they usually are and they rarely screw it up. Turns out neither of those things happened on Thursday night, and we all had to share a cab ride home with Anthony Randolph. Yay 2014 Bulls draft.

As ever, attending the draft is a singular experience of bro and nerd, sports and business, bar mitzvah and stock exchange. You really need to go sometime. The only women you'll find in the building are almost certainly being paid to be there. It's an evening of failed chants and tiny pockets of excitement. It is tribal idiocy at its best (read: worst). I will say that being on a goddamned tape delay while actually watching the stupid thing live - due to the reporting brilliance of Adrian Wojnarowski and others on Twitter - took some of the starch out of it. It's like having somebody whisper the bingo number in your ear right before they call it over the loudspeaker. I'm glad to know what it was a bit sooner than everyone else but it ruins the fun of the game. But it's still strangely enjoyable to see so many of the personalities of the NBA beyond the game itself skittering about beneath you while you drink beer and loudly tell nobody in particular how much you did or didn't like a guy.

Lest we forget, however, the motley crue that sits in the stands for this thing and makes all those BOOOOOO noises you hear at home whenever the opportunity presents itself and many times when it doesn't at all. Thousands of grown men talk idiotic smack, drink way too much beer (ON THE CLOCK MEANS BEER THIRTY)  and wear NBA jerseys without undershirts, as if at any point Greg Popovich might run up and put them in a game to give Timmy a five minute break before halftime. News flash: Even NBA players themselves wear other clothes the second they come out of a game. Now if you wanna show up in full warmups and strip down to your uniform every time you get a beer, that's an idea I can get behind.

At one point, a nearby 76ers fan (there were more of them than any other fan base by far) thought it would be great to start a LET'S GO SIXERS chant at a volume normally reserved for such things as: getting one's legs caught in a grain thresher, or hurtling to one's death from 70 stories while on fire. It was most pleasant. He got into a shouting match with a nearby pod of Celtics fans who were agitated at all the LOUD NOISES they were hearing and started to bray back in the source's direction with their own oral missive. This continued for many minutes and was enjoyed by no one and ended with me getting a beer.

The only moment of any real quality was the draft selection of Isaiah Austin by Adam Silver as a way to honor the young man whose NBA dream was cut short prematurely due to a genetic condition. It was genuinely touching in an environment where that is nearly impossible and it may or may not have gotten momentarily dusty in the upper reaches of the Barclays cheap seats. Best wishes to Isaiah Austin and his family.

I did take a peek at one point at the media feeding trough that had been built on the Nets practice court on one side of the stadium. Booth after booth of cameras and lights pointed at an ever-changing subject as extremely tall dudes in fancy suits and colorful baseball caps were shepherded from partition to partition. It's amazing to see the NBA machine take in these new members and get them on the grid. 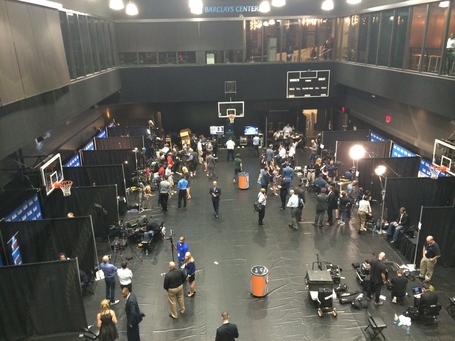 I left somewhere in the fog of the second round, where picks are being sold like hotcakes, yawns proliferate and name pronunciations represent a large portion of the remaining entertainment. I rode my bike the fifteen minutes it takes to get home thinking about the Bulls' evening and why it bothered me. Upon arriving at home learned the Bulls had taken an Australian power forward with the 49th pick that I'd never heard of. It didn't change how I felt.

I guess tonight is the night the worm turned for me for GarPax. I have long defended them because they excel at patiently collecting assets, even as they play the cheapskate game. I've watched them flail in trade proposals, antagonize their own coaching staff, and mis-manage injury in increasingly creative ways. While asset collection and smart drafting has turned out to be a very valuable skill under the current CBA, if you are ultimately bad at using those assets then it is a pointless skill.

It's not as though giving up a mid-level draft pick is a huge loss, but think back to what the Bulls could have gotten for the Bobcats' pick before it was conveyed this year. It's debatable, sure, but odds are it was worth a hell of a lot more than being one of three additional assets it took to move up five spots in the middle of the first round. That's poor asset management, and when you add it to other moves like it (the Korver trade, letting Asik walk for nothing, Kirk pt. 2), it is the hole that could ultimately sink this boat.

I like Doug McDermott now that I have begun talking myself into him. I think he's going to make some big-time shots for this team and fills a definite need. Thibs will minimize his defensive liability and the Bulls will have spacing they haven't had since Korver was in town. But the Bulls FO has been one of the league's worst in terms of proactive creativity since they took the reins from Krause's tiny hands - I've seen them in person, they're so small - all those years ago. So it's frustrating that now that they've FINALLY decided to get in the game, they spilled a whiskey sour on the felt while trying to make their first bet.

It's clear the Bulls loved Doug McDermott and you have to go get the guy you want. He was the first in a series of roster moves this offseason that will try not to waste the primes of two all-time Chicago Bulls, and just maybe hang another banner in the rafters of the United Center before it's all said and done. It's just a little ominous that the Bulls got the worse end of the deal on the cusp of a regime-defining offseason of deals.