From Kobe Bryant to Kevin Garnett to LeBron James, the Bulls are always rumored to get the next available superstar. It never happens. Let's hope that changes this offseason.

Share All sharing options for: It's time for the Bulls to change their tenor by acquiring Kevin Love or Carmelo Anthony

At what point did you realize the Bulls were the proprietors of the worst offense this city has seen since, like, the 2004 Bears? Maybe it took until the final loss, when the Bulls scored a season-low 69 points in an elimination game against the Wizards, including just 28 points in the second half. Perhaps you were keeping track of offensive rating during the season and noticed only the Orlando Magic and Philadelphia 76ers -- who weren't even trying and therefore should not count -- were more punchless with the ball.

For most of us, I don't think it was one moment in particular. The composite sound of all those missed jump shots that went into forming the team with the lowest field goal percentage in the NBA chipped away at our brains little by little until all that was left was the rough approximation of another ill-fated brick and the memory of Kirk Hinrich being the last person announced in the starting lineup. By the time it became apparent the season would soon be mercifully over, a numb feeling of hopeless resignation was all we had. The Bulls' offense really was that bad.

How to get Carmelo

Jason Patt examines the routes the Bulls can take to get the star forward.

How to get Carmelo

The truth is, we didn't need to see the finish line to know how this race was going to end. Even if most thought Chicago would get past the Wizards, the Bulls' flaws were blatant enough to prevent even the most optimistic fans from thinking this team had a real shot at the Finals. In a sense, it felt like the offseason was more important than the actual season from the moment Derrick Rose went down with his second straight season-ending knee injury. At that point, you must have had stronger will power than me to stop yourself from daydreaming about what might happen in the much publicized offseason of 2014.

We've been over this before, but this offseason is a long time coming. Bill Simmons was writing about Kevin Love-to-Chicago trades before Game 3 of the Nets series in 2013. Carmelo Anthony rumors have hung over this franchise like a storm cloud from the minute the Knicks' nightmare season got going. As the calendar pushed forward, it only became more unavoidable that the Bulls were going to be in the middle of these rumors. We should be used to it by now.

Zach Harper (a Wolves fan!) called a Taj Gibson-less package for Kevin Love "probably the best move (Minnesota) could make". On a potential pairing of Love and the Bulls, SI's Rob Mahoney said "the arrangement makes a whole lot of basketball sense". Mark Deeks outlined all of the reasons Carmelo and the Bulls need each other.

It shouldn't be any surprise everyone thinks Love and Anthony are perfect fits in Chicago. The Bulls need offense, and Love and Anthony are two of the very best scorers in the league. New York and L.A. are the only two markets bigger than this one. In a post-Decision landscape, it's obvious no single star is capable of winning anything by their lonesome. The days of Allen Iverson dragging Eric Snow and George Lynch to the Finals are long gone. With Joakim Noah and Rose in place, one more star-level player could be all it takes to push the Bulls past the rest of the East's flawed contenders. This should all make sense, because all of it is logical.

There's been something holding me back from getting too excited about the possibility of Anthony or Love, though, and it only registers if you've been hanging on every word and every action from the front office since the Jordan dynasty ended. The Bulls are always in position to make a move like the one everyone thinks they should make this offseason, and it never happens.

Maybe that's a defeatist attitude. Maybe things that happened (er, didn't happen) three, five or 10 years ago have no bearing on the present. That's fair, but previous burns have put me in a simple position when it comes to the Bulls acquiring superstar talent: I'll believe it when I see it.

As you might remember, the first years of the post-Jordan era were as destitute as any franchise will ever see. The Bulls went 13-37 in 1999 and came away with the No. 1 and No. 16 picks in the draft. They selected Elton Brand and Ron Artest, which should have laid a foundation for success for years to come. The next year, the Bulls had enough cap space to lure two big-time free agents in a loaded free agent class to go along with three first round picks, No. 4, No. 7 and No. 24.

I remember watching the local news and seeing 21-year-old Tracy McGrady getting off a plane at O'Hare. There were rumors McGrady had already agreed to sign with his hometown Orlando Magic, but it didn't stop the Bulls from welcoming him on his recruiting visit.

In hindsight, this is about the most embarrassing free agent pitch I can think of. I wish there was video.

Amid earlier reports that he was simply making a "courtesty visit" to Chicago--after being overwhelmed by the prospect of playing for the Orlando Magic--McGrady was greeted at O'Hare Airport by team mascot Benny the Bull, the Luvabulls cheerleaders, a small band playing "Sweet Home, Chicago" and a media horde.

Remember this next time you're at O'Hare and pay homage to Gate C-20. It is legendary.

The Bulls, of course, whiffed on McGrady and Eddie Jones and Grant Hill and Tim Duncan in free agency. They ended up with Brad Miller (not bad!) and Ron Mercer (BAD). In the draft, they took Marcus Fizer, Jamal Crawford and the immortal Dalibor Bagarić. They would lose 60 games each of the next two years (then 52, then 59...).

The Bulls finally got decent in 2004-05 behind four rookies (Luol Deng, Ben Gordon, Andres Nocioni, Chris Duhon), second-year guard Kirk Hinrich and third-year big men Tyson Chandler and Eddy Curry. It is insane to me that Curry and Chandler are still both only 31 years old, because this feels like it happened a lifetime ago.

The Bulls were poised for a big splash with so much young talent, and once again they were connected to every disgruntled superstar in the league. At this time, the Bulls were thought to be major players for Kobe Bryant, Kevin Garnett and Pau Gasol.

The Kobe situation is worthy of its own localized 30-for-30, really, starting with the (first ever??) viral video of Bryant telling a fan in a parking lot to "buy a Bulls jersey" if he wanted his autograph. I remember the story about Bryant "cleaning out his locker" when he was really just cleaning it. I remember the Sun-Times running a Photoshop of Kobe in a Bulls jersey before this type of thing started happening every day. 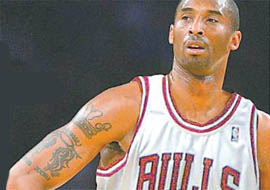 There are many reasons why the Bryant deal never went down, particularly because Kobe objected to Deng being in the deal. The Kobe saga was preceded by rumors tying the Bulls to Garnett, which lasted at least two full seasons. They were succeeded by rumors tying the Bulls to Gasol, which didn't last as long because he was quickly traded to Los Angeles for his brother. Word was the Bulls didn't want to trade Nocioni in a package for Gasol. So it goes.

The summer of 2010 wasn't a complete disaster for the Bulls -- it brought them Tom Thibodeau and Bench Mob 1.0 -- but there was a time when the Bulls were considered the front-runners to land two of LeBron James, Dwyane Wade and Chris Bosh. When all you get out of that is Carlos Boozer and some nice rotation pieces, it stings.

Point is, this kind of thing has been going on for a long time. It hasn't always been the same people in charge of the front office, and hindsight hasn't always proven that the splashy move would have been the correct one. There are, though, only so many times you can go through these rumors before you know what to expect. Signing Ben Wallace and Boozer and trading for Jalen Rose didn't exactly heal any wounds.

When the Bulls said earlier this year that they hadn't even run the numbers on getting Anthony here, I tend to believe them. When they told Boozer he'd only be let go if they could get a superstar, it would make sense that they were telling the truth.

The Bulls are not brash with their decision making. They don't rush anything. Even when it seems like everyone else with a sharp basketball mind thinks they should push their chips to the center of the table and go for broke, the Bulls typically opt to take a more reserved approach.

The difference this year, I hope, is the realization that this team isn't all that young anymore. Noah turns 30 in February. Gibson turns 29 in three weeks. Even before the injuries, players of Rose's stature who are so reliant on athleticism don't tend to age well. Iverson was out of the league by his early 30s. Whatever is coming next for Rose might be the best years he has left, even if he's only 26. The Bulls have a roster in its prime. There's an opening because the Eastern Conference is as bad as it has ever been.

It's time for the Bulls to be bold and make a move. Go get Carmelo. Go get Kevin Love. At this point, I'm not even too concerned about the opportunity cost robbing the Bulls of what makes them so tough in the first place. We've seen that this team is good at filling in around the edges. What they typically lack is the starpower to accentuate all of those fine role players.

Jason has already done a great job of spelling out how Melo can get here.  It's easy enough to play with the trade machine and figure out the appropriate salary matching deal for Love. As a former Bears coach used to say, the pieces are in place. Now the time for the Bulls to do something about it.