What's going on with the Pacers?

The Pacers looked wretched at the United Center on Monday and haven't been very good since the All-Star Break. Are they still title contenders?

Share All sharing options for: What's going on with the Pacers?

I'm not going to lie, I bought into the Pacers hype. It was kind of hard not to when they were running out to a 39-10 start and leaving a wake of destruction in their path. Paul George looked like a bona fide MVP candidate and Roy Hibbert looked like an easy choice for Defensive Player of the Year. Meanwhile, Lance Stephenson was enjoying a breakout season and appeared to add another dimension to a team that fell one game shy of the NBA Finals last season.

There were some first signs of possible trouble in mid-to-late February. In the 50th game of the season, the Pacers lost to the woeful Magic by one. They then lost two of their next four games. It didn't seem like a big deal at the time, because all teams go through little funks during the grind of an NBA season.

A five-game winning streak followed to get the Pacers to 46-13, but there were again some warning signs. Those five wins included two against the Bucks and one apiece against the Lakers, Jazz and Celtics. Only two of the five wins were by double-digits, and one of those was somewhat close until the very end.

The struggles against the dregs of the NBA were a sign of things to come. Since reaching that 46-13 mark, the Pacers have gone just 5-7, including a wretched performance against the Bulls on Monday night at the United Center. The Pacers managed just 77 points, and that came one game after putting up just 71 points in a loss to the Grizzlies.

I was in attendance at the UC last night, and it was remarkable to me just how much the Pacers labored to get good shots. Obviously the Bulls' defense deserves a ton of credit, but there was just nothing going on with the Pacers' offense. They couldn't get the ball to Hibbert inside (big ups to Joakim Noah), and they were only able to free George for really good looks on a handful of occasions. Also, it felt like nearly every possession had a pick-and-roll that resulted in a behind-the-back pass to a big that went nowhere.

In terms of types of shots, both the Bulls and Pacers like to force teams into taking mid-range jumpers. And sure enough, both teams took over 40 percent of their shots from mid-range, with the Bulls close to 50 percent. The big difference is the Bulls shot over 51 percent on their mid-range shots, while the Pacers were down under 26 percent. 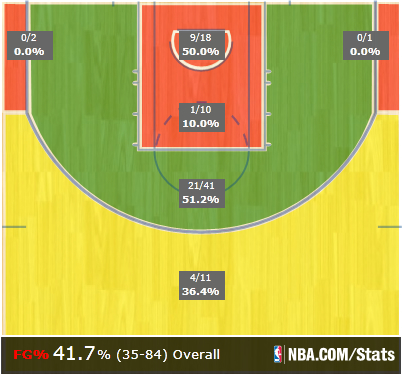 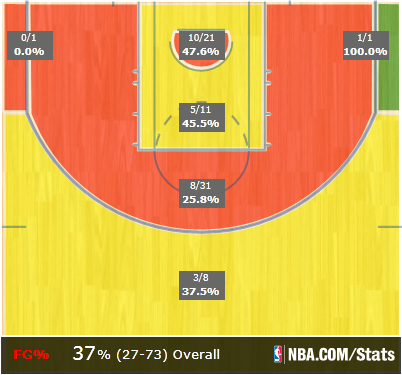 Again, both the Bulls and Pacers encourage mid-range shots, so Indiana isn't exactly upset when a team takes nearly 50 percent of their shots from that distance. However, the Bulls did get a lot of really clean looks out of their sets, and after missing a bunch in the first half, those shots were going down in the second half. Meanwhile, the Bulls did an excellent job forcing the Pacers into tougher mid-range shots.

It must be noted that George's torrid three-point shooting has cooled as well, and he's also not finishing at the rim as frequently. I haven't watched enough Pacers games to know exactly why, but perhaps a few of his atrocious attempts last night can help explain it. On two separate fast-breaks, George either got too cute or tried desperately for a foul instead of going up and just using his athleticism to finish strong. And pretty much every time he didn't get a whistle, he made sure to whine about it incessantly. While George did finish with a team-high 21 points against the Bulls, he made just 8-of-22 shots and kind of played like a lazy, whining bum for much of the night.

With George really struggling offensively of late, the Pacers as a team have really suffered. Just take a look at this:

As good as their defense is (usually), it's hard to win when your offense is performing so poorly. The Bulls surely know a thing or two about that. The Pacers' offense was never that great to begin with, but earlier in the year, they were doing plenty enough to win games and often win games handily.

But when the offense is close to league-worst, winning becomes a lot tougher. It also puts more of a strain on the defense, and the Pacers' defense hasn't exactly been as dominant of late, especially against the good teams (this was from before last night):

Besides George's poor play, Hibbert has been somewhat of a disaster of late. The big man will always provide good to best-in-the-league defense from the center position, but his offense and rebounding have fallen off a cliff. In March, Hibbert is averaging 8.9 points and 4.6 rebounds while shooting 44.0 percent from the field in 29.0 minutes per game. In the loss to the Grizzlies last week, he had zero rebounds in 21 minutes. In 26 minutes last night he had three points and five rebounds while missing all five of his shots. This is a guy who's 7'2 and does the majority of his work close to the basket. Those are simply unacceptable numbers from a player of his supposed caliber. Jo and Taj pretty much owned him.

Then there's Evan Turner, who I thought would be a nice addition for the Pacers. While Turner's numbers were a bit inflated in Philly, I didn't think he could be worse than the corpse of Danny Granger, who simply wasn't adding much to the Pacers' bench. Instead, much to my delight, Turner hasn't really helped in the slightest. In 355 minutes this season, the Pacers have a net rating of -3.2 with Turner on the floor, per NBA.com's stats page. But hey, he's apparently good at firing up airballs, which he did twice on Monday night. Keep firing, Evan.

So I've spent a good 1000 words talking about how the Pacers look like an awful, good-for-nothing squad that has no chance of winning a title. But as bad as they've been lately, it would be foolish to count them out. I'm also not quite ready to say the Bulls would beat them in a series. After all, the Pacers did just handle the Bulls last Friday, and Chicago has many of the same offensive issues as Indiana.

The Pacers have had a recent history of struggling late in the regular season, and perhaps this is just another case of that. I hesitate to say they're coasting, because they've made no bones about how much they want the No. 1 seed in order to have home-court advantage. But some of the stuff I saw last night looked like coasting.

Maybe the Pacers regain their groove from earlier in the year. They still have a lot of really good players and Frank Vogel is a solid coach. But my belief is slowly growing that the Bulls could possibly take them in a series. I hope we get the chance to find out.