[Note by your friendly BullsBlogger, 02/23/14 1:03 PM CST: LeBron has been ruled out for today's game. Another big-time schedule break! ]

[Thanks to Bullieving in Miami for today's game preview -yfbb]

Seriously, though… is there a more apt name for an NBA team than the Heat? While the rest of the country endures a blistering winter, Miami sweats. And thus the Bulls get a reprieve from snow and wind for one afternoon with some fun in the sun and a matchup against the reigning 2-time champion Miami Heat. Following the All-Star break last weekend the Heat, winners of 12 of their last 15, look to remain hot as they set off in earnest on the defense of their NBA crown with the season going full tilt from now until June. Sounds intense.

No sweat, Chicago. There's an old sports adage… defense travels. And the Bulls come packing plenty of that. This matchup will be no different than that of past Heat-Bulls games: can the Bulls grind out enough stops against the Heat's multi-pronged offensive attack? Wait… did you just read that correctly? Did I just refer to a Erik Spoelstra-led offense as diverse? You bet your sweet ass I did. The Bulls are going to have to be flying all over the court as in Year 4 of the Big 3 in Miami this Heat team is in complete sync on offense and it often feels like they don't even have to try. And while some might understate Luol Deng's departure, against this opponent that is one less very capable perimeter defender. The Heat aren't just standing around waiting for Lebron James to set them up for a shot. Players are cutting to the rim from every angle imaginable and the ball is being swung around as it seems every player touches the ball on just about every possession as they search out the most efficient shot possible, leading to their league-best 109.8 ORtg on 51% shooting. This isn't your grand-daddy's offense of Mike Bibby and Zydrunas Ilgauskas from the days of yore in Miami.

An interesting thing happened on December 5th, 2013: the Bulls WON! Yes, that's right. In what seems like an eternity ago considering everything Bulls this season the good guys handled the Heat up in the Windy City behind some steady shooting (50%FG, 53% from three) and by bludgeoning the Heat on the boards (49-27). Well, guess what… it was an eternity ago because the calendar now reads 2014, and the 2014 Chicago Bulls are awesome! They have the most wins in the East in 2014 (along with Indiana. whatever.). So if we beat the Heat back during the depths of Rose depression, the absence of Buckets and the mere presence of Marquis Teague (19 minutes), and pre-DJ (man, I wonder what music sounded like…), then we for sure got this game under wraps, right? I mean, that's how these things go, no? What's that you say? Dwyane Wade and Chris Andersen didn't play in that game. Roger Mason, Jr. did. OK, I see what you're getting at here.

Blogging with the Enemy

Blogging with the Enemy

We know the Bulls defense will always be there. That is just a plain fact of a Tom Thibodeau-led team. However, the offense has been livin' right recently, getting off to quick starts and grabbing big leads. The Bulls have the biggest point differential in the first quarter in the month of February. Looks like it's time for the Heat's defense to take center-stage and try to control a game, something that we know they are capable even if the stats don't bear it out this season. This seems like a great time for the Heat to unveil Greg Oden to the Bulls. This is precisely the kind of opponent the Heat signed this guy for, to try and mitigate the advantage the Bulls have on the boards with Joakim Noah, Carlos Boozer, and Taj Gibson. The Heat could use the extra help as it just seems like Coach Spo' has less and less trust in the defense off his bench. The Heat only played 8 against OKC on Thursday night. Guys like Rashard Lewis and Udonis Haslem just aren't getting burn. And even though Micheal Beasley has been enjoying success offensively, Spoelstra still doesn't trust him defensively and thus his minutes have been reduced from earlier in the season. Birdman, Jesus Shuttlesworth, and NoCo is pretty much all you get from the Heat bench these days. That might be different today as Lebron deals with an apparent broken nose after running into Serge Ibaka's hand on a dunk the other night. So Beasley might get extended burn after all.

On the Bulls side, Jimmy Butler's status is day-to-day (ha!) with a bruised rib he suffered while going all MJ on the Nuggets. Derrick Rose is listed as out.

Note to Jimmy Butler: if you're hurt and need to come out of the game, making reverse layups and draining corner 3's while simply slumping over on the sideline isn't the way to do it. Instead, take a page from that flopper Lebron's book… and produce blood. 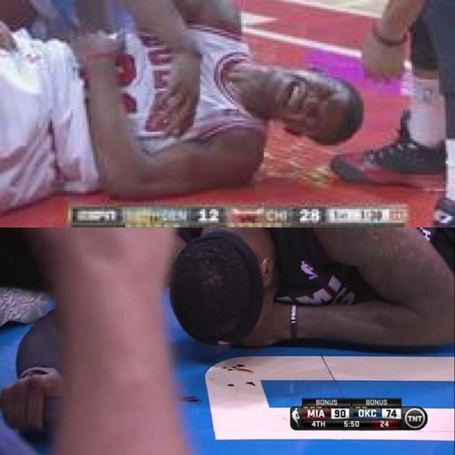 In going with my reverse prediction theory since I can't seem to pick this game the last few times, I think the Heat have this one in the bag. ;) Though if Lebron and Jimmy can't go we lose out on an exciting head-to-head matchup. Either way, should be a fun game as the Bulls come in hot and you know they never have a hard time getting up for this game. I know Noah definitely doesn't. 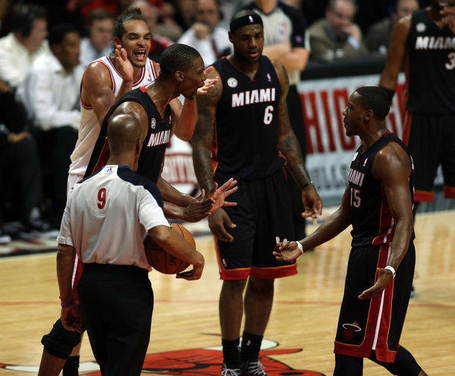