Chicago Bulls schedule gets a lot tougher in the second half

What to watch for in the second half of the season.

Share All sharing options for: Chicago Bulls schedule gets a lot tougher in the second half

The All-Star break is but a metaphorical halfway point in the season, one the Bulls crossed as the No. 4 seed in the dilapidated Eastern Conference at 27-25. That means the Bulls have 30 games remaining on the schedule. It starts Wednesday when the Bulls travel to meet the team one spot above them in the standings, the Toronto Raptors.

The Bulls are, improbably enough, 13-7 since trading Luol Deng to Cleveland. They survived a road trip out West by going 3-3 and have some decent wins since the trade: two victories over the Suns, a win over a severely limited Spurs team, two victories over the Hawks and one against the Nets. What the Bulls lack is a statement win post-Deng, but they'll have plenty of opportunities to get one over the next month. That is really just a nice way of saying that the schedule is about to get tough and it shouldn't be that big of a surprise if the Bulls start to fall from their current lofty playoff perch.

At the moment, the Bulls have played the second easiest schedule in the NBA, and there's a good bit of separation between them and most other teams. It's something to consider when evaluating the Bulls' success after the Deng trade, though the Bulls will certainly have the chance to put those concerns to bed right out of the gate. Five of the six games remaining on the calendar in February should have the Bulls as the betting underdog. 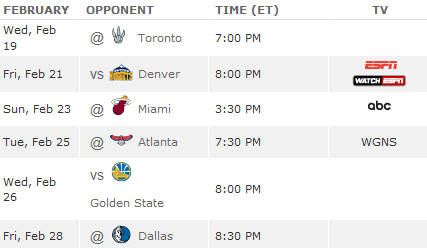 Denver is reeling as of late, losing four straight, but the rest of that slate is downright intimidating. The Bulls have beaten the Raptors in Toronto once already, but they've also lost twice to the OVO crew at the United Center. The Bulls have owned the Hawks this year, but Atlanta has a formidable 16-9 record at home. Dallas is 15-7 against the East this year, while Golden State is 12-6. I don't need to explain how tough it is to win at Miami. The Heat's 20-4 home record speaks for itself.

March isn't going to be any easier; which is to say, it's the toughest month on the schedule. At least most of the Bulls' most difficult games in March come at home. The Bulls host Memphis, Miami, San Antonio, Houston, Oklahoma City, Indiana and Portland. For my money,  those are seven of the eight best teams in the NBA. March also includes games at Indy and at Brooklyn, for good measure.

If the Bulls can weather the oncoming March storm, April should line up nicely. The Bulls' schedule in April is pretty manageable: 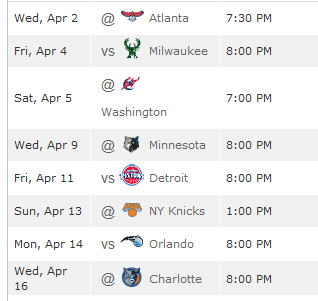 I don't know if the Bulls can hang on to the No. 4 seed, but it would certainly be a great accomplishment to get home court advantage in the first round of the playoffs after everything the team has been through this season. The real concern should be avoiding the No. 7 and 8 seeds. The Bulls only have a 2.5 game lead over No. 7 Brooklyn right now, so their place in the postseason is far from wrapped up. We'll see where they're at after that hellacious March schedule.

Oddly enough, the best thing the Bulls have going for them right now is health. Joakim Noah's feet haven't been an issue all season, and we can only pray that trend continues. Taj Gibson has been an agile beast the entire campaign. Jimmy Butler might still be a little hobbled, but at least he's healthy enough to give the Bulls 45 minutes every night. Augustin is the real game-changer from earlier in this season. He's been a godsend for this team.

The fragility of it all is a bit scary, though. If Noah or Gibson go down, goodnight. Same can be said for Dunleavy, Augustin and Butler. Health is always paramount in the NBA -- this is not exactly breaking news -- and some bad luck can quickly sink the ship. If the Bulls can stay healthy, though, the rest of this season should be a difficult but fun stretch.

The common refrain is that the Bulls are an eyesore to watch; I know I'm guilty of saying it. It's probably true. But just like last year, there's no denying that the Bulls' effort under Tom Thibodeau is admirable. We were legitimately having tanking discussions just a couple months ago. It looked like, for once, Thibs didn't have enough to win with. Then everyone got healthy, Augustin signed on and it's been relatively smooth sailing every since. A difficult schedule can change all that, but the Bulls have at least put themselves in a good position heading into the final 30 games. Can't ask for much more than that out of another lost season.