Chicago Bulls notebook: Now the No. 6 seed, was passing on Deng-for-Bynum swap the right thing?

The Bulls are rising up the standings, but is that a good thing?

Share All sharing options for: Chicago Bulls notebook: Now the No. 6 seed, was passing on Deng-for-Bynum swap the right thing?

The grit-fueled aesthetic atrocity known as the Chicago Bulls continue to rumble forward in the muck of another lost season, leaving everything they touch slathered in a layer of apathy, indecisiveness and general discontent. And this is when they're winning! Yes, it's something the Bulls have suddenly started to do as the roster has slowly gotten back to full, Rose-less strength. The Bulls have won three of their last four and five of their seven, moving them into the No. 6 seed in life's tallest midget contest, the Eastern Conference playoff race. 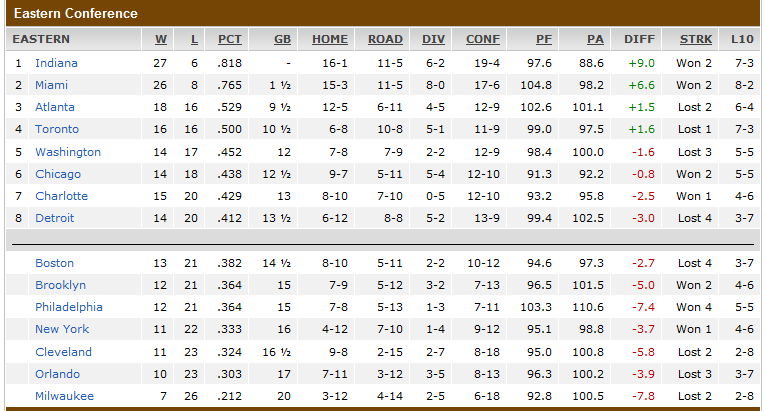 Credit for the Bulls' recent winning-ish ways can go in a few different directions. The schedule has been pretty easy, with the combined records of the teams Chicago has defeated over the 5-of-7 stretch sitting at a paltry 69-99. D.J. Augustin has actually been pretty alright as well, lifting a bit of the visual eyesore and at least looking the part of a professional basketball player, which is more than you can say about most guards on this team. Oh yeah, Luol Deng and Jimmy Butler are back, too. Even if those two aren't 100 percent healthy, they find a way to make a difference by giving the Bulls above average production at both ends of the floor. That's a winning formula, particularly in the East.

The more abstract question is whether this is a good thing or ultimately counterproductive. I've been riding with #TeamTank from the moment Derrick went down again, but it always struck me as easier to make the playoffs than to miss them this season. There's just too many crummy teams in the East either by shear misfortune or calculated intent, and a Tom Thibodeau team with Joakim Noah, Taj Gibson, Carlos Boozer, Luol Deng and Jimmy Butler as its top five in the rotation is simply too proud and too talented to roll over.

If the tank was going to break down the walls, the front office was going to have to handcuff Thibs. It had the opportunity to do just that when the Cleveland Cavaliers called and offered Andrew Bynum for Deng, but the Bulls reportedly turned it down. If the Bulls were going to trade Deng, this was the time to do it. Indecisiveness killed the cat, and now it appears the best hope for a forced tank job is a ship that has sailed.

Should the Bulls have made this trade? I will say, it's a hard decision. While I'd argue it's always better to be decisive -- to have a plan and to stick with it -- I can see why the Bulls want to keep Deng. At the same time, it's likely they could look awfully stupid when a team offers him that Josh Smith or Iggy money they can't and won't pay, and they lose him for nothing without the added benefit of improving their own draft pick.

Mark Deeks wrote a wonderful thing at ShamSports that argued the Bulls should have done the deal for very evident reasons. He says the Bulls should be a 55-win team next year even without Deng, which I suppose I agree with. However, if this season has taught us anything, it's just how critically important Deng is to the Bulls' chances.

A quick and dirty guide to game prognostication this season goes like this: is Luol Deng playing? If not, the Bulls are cooked. If so, they can probably beat anyone in the East on a given night, even Indiana and Miami because a) they get extra motivated, and b) they've already defeated both.

Maybe the Bulls are a 55-win team without Deng next season, but can they win in the playoffs without him? That's the real question. If there was a way to keep Deng and bring over Nikola Mirotic, I'd be all for it. It all depends on how much money Mirotic wants.

The general consensus is that Deng is due to start declining and that the Bulls would be paying for past production when they want future production, but I'm not 100 percent certain that's true. It would not surprise me if Luol Deng remains very good in his age 29, 30, 31, 32 seasons. Would it surprise you? It's not like he's going to get any less huge. He's never been particularly reliant on athleticism in the first place, and I wouldn't expect what's left of it to suddenly fell off a cliff. I also get a sense that Deng is just built to do this after watching him lead the league in minutes two of the last three years and gut it out through numerous injuries. We realize Deng is younger than Noah, right?

I'm just saying, signing Luol Deng for, say, $40 million over four years might not be the worst thing in the world in my opinion. Tall forwards who can shoot and play both ends of the floor are the single most valuable thing to a basketball team outside of a superstar talent and a near-star level big men who can play both ends of the court well. It's worth noting that Jimmy Butler's free agency after the 2014-2015 season will also factor into this decision. As always, there's layers to everything.

It does seem like the Bulls' bed is made after passing on the Bynum deal. What's left amounts to playing out the string, and barring an injury to Noah and another starter, it looks like the Bulls will have enough to make the playoffs. That means there's no shot at a young, franchise-changing talent. It's tough, just like everything this season has been tough for the Bulls. There's nothing left to do but play out the string.