Noah has been amazing in January and is making a push for a second consecutive All-Star selection. Meanwhile, Hinrich talked about his plans for the future.

Joakim Noah missed almost all of the preseason with a groin injury, and it really showed in his play the first month or so of the regular season. In the month of November, Noah averaged just 9.5 points and 7.5 rebounds while shooting a very pedestrian 46.7 percent from the field.

But Noah has found his groove of late, and he put forth yet another monster performance in the Bulls' easy 103-78 victory over the Sixers on Saturday night. Noah had 21 points and 16 rebounds, which is the 12th straight game he has recorded double-digit rebounds, a career-high.

As K.C. Johnson of the Chicago Tribune noted, Noah is making an All-Star push with his recent play. In January, Noah is averaging 14.7 points, 14.0 rebounds, 5.1 assists, 2.1 blocks and 1.2 steals. He has helped bring the Bulls back from the dead, no doubt fueled by all the talk of tanking.

Noah is also just about the best when it comes to quotes, and he delivered another gem after the win, which was the Bulls' biggest in terms of margin all year:

Noah on rare blowout W: "It's a great feeling. Sunday off. Saturday night in Chicago. It’s snowy out there but we gotta make the best of it.

Considering the outcome, Noah obviously wasn't the only Bull to put forth a big effort against Philly. D.J. Augustin was marvelous yet again, notching 19 points and eight assists in 28 minutes. Carlos Boozer added 15 points and 13 rebounds, while Tony Snell knocked down three threes off the bench.

The only real negative came in the form of yet another poor shooting performance by Jimmy Butler. The third-year wing went 4-of-11 overall and 0-of-4 from three, and he's now down to 37.8 percent overall and 29.7 percent from three on the year. Here's his shot chart, and it's really not pretty: 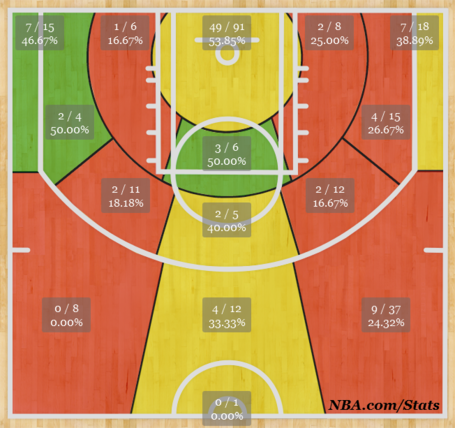 I have little doubt Butler's injuries are effecting his shooting numbers, but it's still really disappointing to see them so low. His mid-range game is simply not good, and he has been woefully bad on non-corner threes. Considering it's unlikely Butler sits with his injuries unless they get really bad again, we're just going to have to hope he's able to show some improvement while dealing with his health issues. Or maybe he just stays bad and it makes him cheaper when signing him to an extension.

Get news, links and Ziller's #hottakes with Good Morning It's Basketball in your inbox every weekday morning.

My favorite player ever Kirk Hinrich was a +38 in the Sixers game, notching a pretty Hinrichian line of six points, seven rebounds and six assists while shooting 2-of-6 overall and 0-of-2 from three. Hinrich also helped frustrate rookie Michael Carter-Williams into a 5-of-22 shooting night, so naturally, it was the perfect time for a Kirk puff piece!

Hinrich was asked about his plans for the future, and while he said he's happy in Chicago (duh, house in the area!), he's not sure what's in store for him next year, per K.C.:

"I haven't really put a number on it," Hinrich said. "Just as long as I can still enjoy it and be somewhat effective, I'll play."

"I'm happy here," Hinrich said. "I came back here because I wanted to be here. I still like our team. I get along great with the guys. We've been playing well lately so I just want to keep that going."

Hinrich has once again been forced to play a big role with Derrick Rose hurt, and it hasn't exactly been pretty. The veteran guard is averaging 8.1 points and 4.8 assists while shooting a laughably bad 34.8 percent overall and 29.5 percent from three. K.C. revealed Hinrich has been playing through "a jacked-up pinky" on his left hand, which could certainly be contributing to those terrible shooting numbers. But still, those percentages are brutal.

And yet, those shooting numbers are curiously omitted from K.C.'s piece, probably because the Bulls' belief that "Hinrich's value has transcended statistics." So why bring up those terrible shooting numbers? They don't matter! GRIT! RUNNING THE OFFENSE! Just read these quotes from Thibs:

"There are so many things that go into what he does for us," coach Tom Thibodeau said. "You just look at how the team functions when he's on the floor. And it's always significantly better than when he's off the floor.

"And he gives you a toughness. And it starts on the ball. We're obviously very pleased with what he's doing."

To be fair, Hinrich clearly does still do some things well, but I'd much rather the Bulls go in another direction next season. I'd prefer the more dynamic (and younger) Augustin as the backup point guard, although perhaps he gets an offer the Bulls won't want to match if he continues to shine. If Hinrich is brought back (whether via re-signing or as an UFA if he's dealt), I do worry the Bulls will once again try and hang their hat on the strangely beloved Rose-Hinrich pairing that had very little success when used this season.

Real GM's Shams Charania first reported Monday morning that the Bulls were bringing back Cartier Martin on another 10-day contract, and the team confirmed the report a few hours later.

In Martin's first game action with the Bulls, the wing flourished, scoring 11 points on 4-of-5 shooting in 26 minutes against the Bobcats. Martin has only played in 15 minutes since then, totaling four points, two assists and a rebound.

It's unclear what the acquisition of Tornike Shengelia means for Martin in terms of signing for the rest of the year, although K.C. says the Bulls are "hopeful" about keeping the 29-year-old on. For now, Martin is here for another 10 days.

Only the fifth time this year:

More from Blog a Bull