Derrick Rose, Adidas throw a party at the United Center

The shoe company knows what it's doing.

Share All sharing options for: Derrick Rose, Adidas throw a party at the United Center

The first thing you notice is the music.

There's always been music at the parties Adidas throws for Derrick Rose before the start of the season --as well as a crowd dressed more fashionably than anywhere else I ever find myself, and more people yelling the word "hashtag" than should be legally permitted  -- but the music has never sounded like this. When I walked into the United Center on Sunday afternoon, a heavily edited version of a Nick Minaj song is booming through the temporary speakers set up on the floor and the crowd -- mostly children dressed in red D. Rose t-shirts -- is dancing and screaming and seemingly having a great time in the stands.

Yeah, it's at the United Center this year. Two years ago when I went to this thing, we talked to Rose inside a Foot Locker on State Street. Last year, we were tucked away in what was essentially a hip South Loop banquet hall. Now that it's in the UC, the crowd is infinitely bigger, the production value is through the roof and the music has officially reached Not Safe for Suburban Parents volume.

Judging by the increase in scale, Adidas is going to have me, Aggrey Sam and three hip-hop bloggers on a yacht in Lake Michigan next year. 2015: rocket ship orbiting the galaxy. 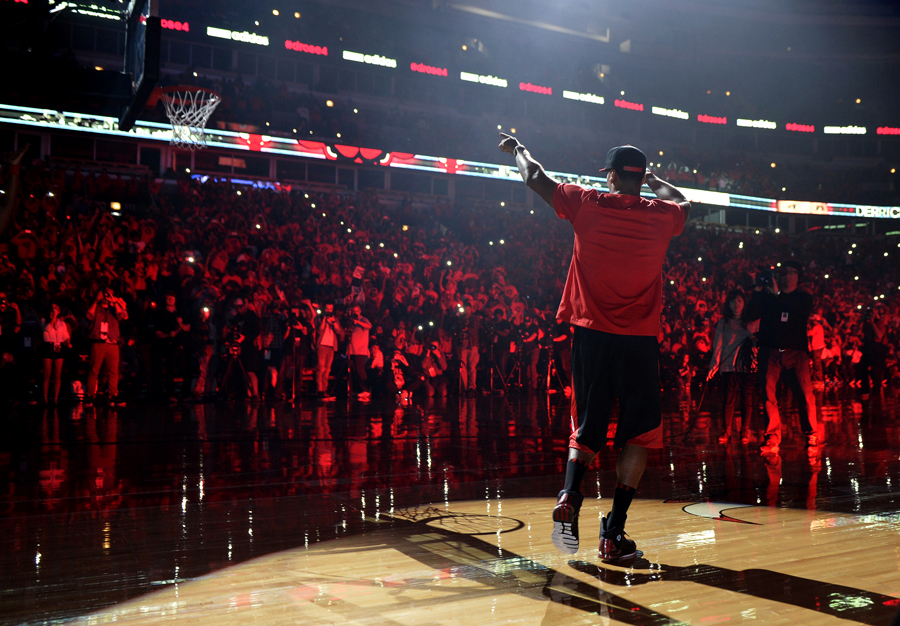 It's all for Derrick, of course, and it's no surprise Adidas has pushed these gatherings intended to debut Rose's new line of shoes and clothing to greater heights each year. They gave him between $185-250 million depending on what you read, money that goes far beyond the max contract the Bulls are paying him, even after Rose qualified for those hard-to-reach escalators in the new CBA. You know, the Derrick Rose Rule.

This year's event feels nothing like last year's, and not just because 5,000 eight-year-olds are yelling the chorus to "No New Friends". The event had a bit of a somber tone last year as Rose was just a few months into rehabbing his torn ACL -- you might remember a moment where he started crying when talking about making it out of Englewood turning into a national topic of conversation. It's much more of a party this year. Everyone knows Rose's preseason return is only two weeks away, and this is a celebration of him making it full circle in his recovery.

Two MCs have been getting the crowd hyped up with Benny the Bull and the Luv-a-Bulls for about a half hour when Tommy Edwards walks to center court. The lights go down, the intro song comes on and he says "...from CHICAGO, Derrick Rose!" and everyone goes crazy. Rose entered like a '90s WWF wrestler, pointing at the crowd and soaking it all in. It was something to behold.

I couldn't help but think of that damned commercial. You know the one, the spot that ends with Rose giving his brother Reggie a bro hug, slyly looking into the camera and making #TheReturn inside a crazed United Center. Rose never had that moment last season as chose to sit out the entire year, but reception on Sunday only makes one daydream about what it's going to be like when he finally plays a game that counts.

Rose grabs a mic and starts going through the typical platitudes with the two MCs on hand -- about how he loves Chicago, loves the Bulls, appreciates the support he's received over the last 18 months.  He's finishing up an answer when one of the MCs gets an MVP chant started and the whole building joins in. 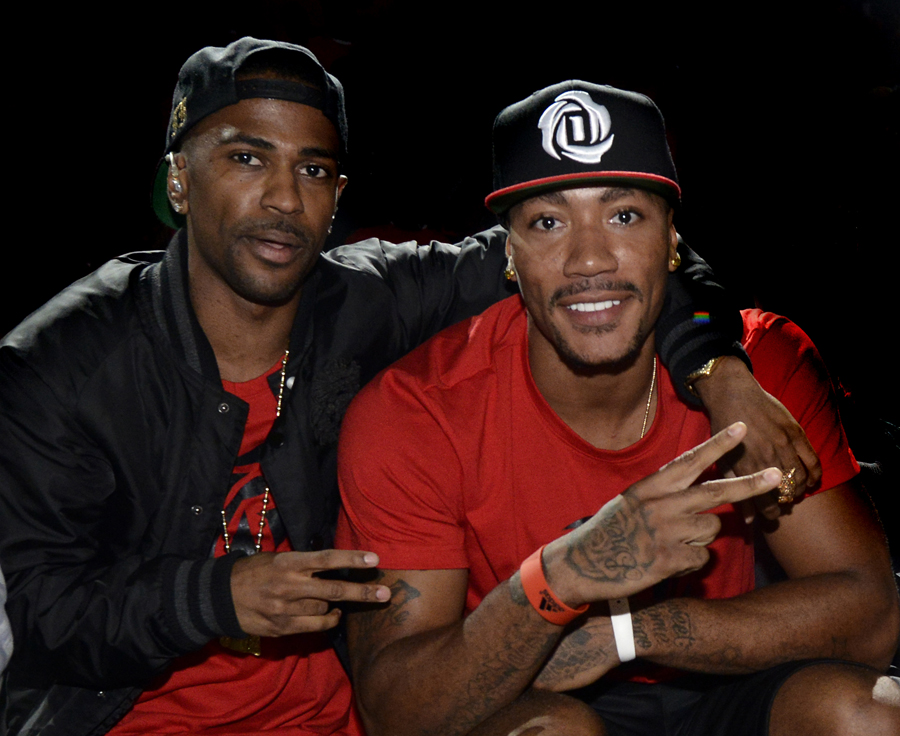 The email invite I got to this thing promises a performance by a "well-known hip-hop artist" and that artist is Big Sean. I'm just begging for the DJ to play "Control" as a pump-up jam all the way through Kendrick Lamar's earth-shattering verse in the middle, but of course this is like the one time and place not to clown Big Sean.

He ran through his verses on "Clique", "Mercy" and a couple new songs I didn't know, all edited to the max for the benefit of these children in attendance. The highlight was unequivocally when the he did the Cruel Summer remix of Chief Keef's "I Don't Like"  -- Big Sean wasn't allowed to say half the words in the chorus, but that didn't stop all the eight year olds in the stands from helping him out.

Myself and the guy from Fake Shore Drive were dying at this. Chief Keef wouldn't be allowed to get within 300 yards of this event, but everyone loves that song. Let's never forget, the children are our future.

What followed was a three-point shootout (there was a dude named "Christian Champagne") and a dunk contest and more Big Sean. Benny the Bull also used a trampoline to dunk over, like, eight cheerleaders. Sitting on the floor and witnessing Benny do this thing was a trip. He is a master instigator and performer, and really earns whatever it is they pay him.

Rose spoke with the media after the event (he didn't last year) and I got my customary spot in the back of the scrum:

Honestly, I couldn't even hear a word he was saying. Fortunately, Aggrey transcribed the whole thing:

"Almost every game, but I had to be smart and really had to think things through. Like I said, I'm 24, I have a bright future. Why not just take strides every day and see when I'm comfortable enough to come back?" Rose explained. "It really didn't faze me. Really, you hear stuff. If you're weak-minded, of course it's going to bother you. But I know that with me, through all the criticism and it feels good that I made it this far, and just looking back at it--and me achieving everything that I've achieved so far.

"They said I couldn't shoot, they said so many things about me and here I am, where I've got my own signature shoe coming and I'm having this big buzz, so for me seeing this success and just knowing that I could care less about what people say about me, that's what keeps me at bay," he continued. "[The Bulls' support has] been great, even going through the process, where they were behind me the whole time. It wasn't any rush--they were telling me to be patient and I listened to them. There wasn't anyone rushing me but a few media people. But who wouldn't want to rush a young player that plays the game the right way back? I understand that."

Throughout the entire thing, there wasn't even a hint that Rose could have come back last year if he wanted to. There wasn't a trace of angst, anger or anxiety over that decision in the building, either. I think it's for the best. The last 18 months and the discourse that came along with it has been nauseating in every direction, and I'm just mostly thankful it's over.

We get to watch Derrick Rose play basketball again soon for the Bulls, thank the lord. In the meantime, if you've got the loot to spare, cop the new shoes, pick up a D. Rose hat or t-shirt and get a branded "HASHTAG: D. ROSE 4" tattoo on your bicep just like me. This event is always a mile marker for me and now it's over. Basketball is coming soon, and that's a wonderful thing.