All time spent with the Bulls center is a gift. Let's cherish it.

Share All sharing options for: Joakim Noah: An appreciation

The onset of the NBA's statistical revolution happened without a landmark moment. There wasn't a conversation-changing book like 'Moneyball' written for basketball; there haven't really been prominent members of the old guard brazenly defending the proud honor of the traditional box score against the stat heads of the day. Basketball's own shift towards sabermetrics was a slow build that one day suddenly felt fully arrived. This is, of course, a pretty great thing.

It's good to be smarter, to challenge conventional wisdom, to have more people engaging in nuanced conversation about a league that's so much fun to talk about. Yet on the most basic level, the pure aesthetics of NBA basketball allow it to be enjoyed and appreciated by the masses even if you've never sat through a three-hour lecture at the MIT Sloan Conference.

I'm not sure if anyone sums up the idea better than Joakim Noah.

This isn't to say he doesn't put up impressive stats by traditional or more evolved measures (he does; more on that later), it's just to point out that the the unbridled joy of watching Joakim Noah play basketball can't be captured by saying he projects to finish with a 12.43 xWARP this upcoming season.

That's a great xWARP score, by the way. It's possibly the best on the Bulls, pending Derrick Rose's durability. But to a certain extent, you probably don't care much about xWARP. It's not the reason you like Joakim Noah so much.

You like Joakim Noah because he plays with as much passion as any player in the league.

You like Joakim Noah because he called the Heat 'Hollywood as hell'. Because he takes the Bulls' rivalry with Miami personally and does whatever he can to get under their South Beach-tanned skin:

You like Joakim Noah so much because he seems to be having a blast all the time.

Noah is said to be the type of player fans can't stand if he isn't on your favorite team. I'm not sure if I'm objective enough to understand the sentiment, but if it is indeed true, I'm damn happy Noah plays for the Bulls. Watching him play basketball is the greatest and we should never take prime Noah for granted. He's simply too valuable an entertainment resource to go unrecognized.

Joakim Noah doesn't fit into a box. NBA centers aren't supposed to be able to pass like he can, handle the ball like he can, play with the same boundless kinetic energy Noah brings every time he steps on the court. Most NBA players don't come from wealth, privilege and private schools or display Noah's worldly appreciation for the finer things in life. They aren't supposed to rock a ponytail or keep their hair in a bun or have a huge gap between their front teeth.

But that's who Joakim Noah is and all of it is wonderful.

More: On Jimmy Butler On Taj Gibson A conversation with Marquis Teague

Noah entered the 2007 NBA Draft off one of the more decorated college careers in recent memory, leading Florida to back-to-back national titles and becoming something of a ubiquitous villain. For all of the talk surrounding Noah's personality, there were plenty of tangible reasons to doubt he'd be successful in the NBA. At a thin 220 lbs., he was undersized for an NBA big man. He never displayed the low post scoring ability centers are supposed to have. And he wouldn't have a big height advantage in the pros like he did in college.

The Bulls had a decision with the No. 9 pick in the 2007 draft: the goofball from Florida who showed up looking like this or a supposedly more polished offensive center out of Washington.

And that's another reason to love Joakim Noah: the Bulls took him over Spencer Hawes! Jesus, we should never be allowed to complain about anything ever again.

Noah's first two seasons were largely a struggle, but he suddenly turned a corner in the playoffs. In overtime of Game 6 of the most heart-racing playoff series of the post-Jordan era in franchise history, Noah did this.

And just like that, Joakim Noah went from a potential first round bust to a local athletic hero.

If Noah had doubters left, I'd like to think he silenced them with an incredible campaign last season. It was the year Noah was named to his first All-Star team, recorded his first third triple-double and, most notably, led a valiant playoff run when it looked like he couldn't walk one week earlier.

The case for Luol Deng as a stretch four 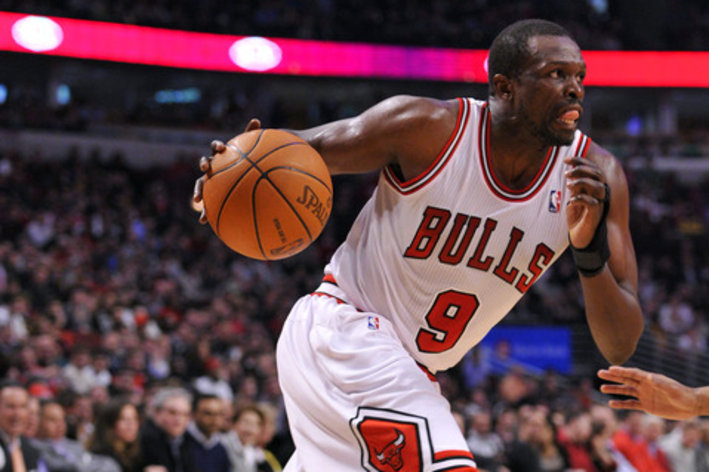 Without Derrick Rose, the Bulls relied on Noah not just to be the team's defensive backbone and top rebounder, but also to pace the offense with his passing ability. What other NBA big man would be capable of doing all three things? Noah and Marc Gasol were the only centers to average four-plus assists last season. He was fourth in steals among centers and finished seventh in free throw percentage among starting fives. There's real skill here, even if some will forever be preoccupied with the weird rotation the ball takes when it leaves his hands on a jump shot.

Simply put, the Bulls would have nothing without Noah. As the team lost Omer Asik in free agency, they were left without a competent backup big. This meant Noah was going to play more than ever, but I'm not sure if anyone could have anticipated the workload coach Tom Thibodeau would stick him with.

For the first two months of last year, the only player logging more minutes per game than Noah was his teammate Luol Deng. Noah averaged over 37 minutes each month until March when the physical exertion finally started to catch up. Noah was diagnosed with plantar fasciitis for the second time in his career, and the Bulls 'held' him to 33.7 in nine games in March. He played in just three games in April because of the foot injury, barely effective in 16 minutes per night.

Perhaps most damning of all: on zero days rest, Noah averaged 38 minutes per game in 13 contests. An injury felt inevitable in real time; when it came, it looked like the Bulls' season might be over because of it.

I'm still not sure how Noah fought through it. He looked terrible as the Nets smoked the Bulls in Game 1 of their opening playoff series, but after that he was back to being the same player he was during the regular season, even with the injury. Noah was huge in the Bulls' Game 2 win, inspirational in the instant classic that was Game 4.

And then came Joakim Noah's best game as a pro, a 24-point, 14-rebound, six-block effort on the road in Game 7 to help the Bulls advance in the playoffs.

Now the only question about Noah is his health. With him, the Bulls think they're in the group of teams with a legit chance to win the title. They think they can stop a potential Heat three-peat; they think they can take out improved conference powers in Brooklyn and Indiana.

It's not going to be easy, but I'll never doubt a team with Joakim Noah. He's overcome the draft day haters, overcome Thibodeau's ridiculous minutes mandate, overcome the voodoo of the crazy woman who flicked him off in Miami.

I have no idea what to expect from Noah next year, but I know I can't wait to watch it.