Taj Gibson is not a luxury

Leave Taj Gibson alone. The Bulls are going to need the 28-year-old forward in the East playoffs next season.

Share All sharing options for: Taj Gibson is not a luxury

Here's the thing about Taj Gibson: he wasn't even supposed to be here today. Gibson enrolled at USC as a 21-year-old in 2006, making him one of the oldest freshman in the country. When he entered the draft after his junior season, he wasn't projected him as a first round pick in most mocks. He earned some decent accolades in college -- being named Pac-10 Defensive Player of the Year and making second-team all-conference in his final season with the Trojans -- but his lack of offensive polish and advanced age meant he was a player largely pegged as having limited upside. He was exactly the type of player that usually gets passed over in the draft.

I remember the reaction when the Bulls selected Taj at No. 26 overall in 2009, and it was not positive. Most were much more excited about the Bulls' other first round pick that year, James Johnson. It wasn't hard to see why. Gibson would be 24 years old before he ever played a pro game, and the Bulls already had a (younger) shot-blocking power forward in Tyrus Thomas, who was coming off the best year of his career in his third season.

It didn't take long for Gibson to make everyone who doubted him look like a fool.

More: On Jimmy Butler A conversation with Marquis Teague

Age is a double-edged sword in the draft. Teams want young players because they have more room to grow, but if the player doesn't show he belongs quickly the same teams are ready to stunt that growth by burying the player on the bench. Long-term interests and short-term interests often collide in the NBA, and young players are usually the victim.

Where Gibson's advanced age might have caused him to slip in the minds of most draft pundits, it also helped him contribute immediately for the Bulls. He played in all 82 games, starting 70, as a rookie and helped Chicago grab the No. 8 seed for the second consecutive season. He moved to the bench the next season after the Bulls signed Carlos Boozer, but Gibson's place on the team was already cemented.

Taj started through November of his second season as Boozer recovered from that 'fall over a gym bag'. When Boozer came back, Gibson and Omer Asik would start a two-year run as the best reserve defensive frontcourt tandem in the league. 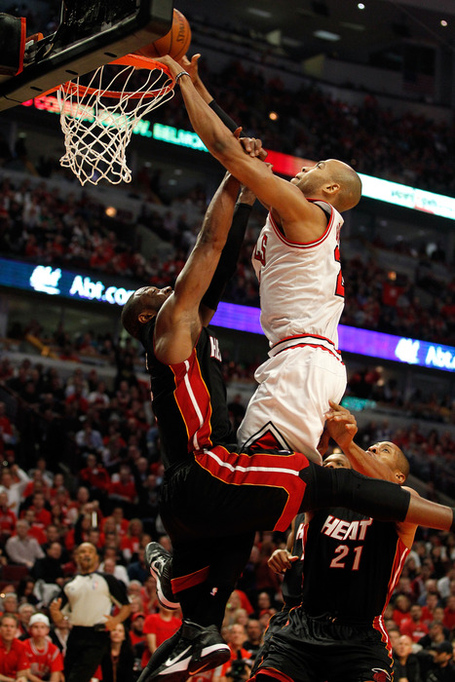 When Gibson and Asik were on the court at the same together a year later (Taj's third season), they allowed just 86 points per 100 possessions. A lineup of John Lucas-Kyle Korver-Deng-Gibson-Asik posted a defensive rating of 77.5 that same year. The Bulls' knew they had something special in the Gibson-Asik pairing, but so did the rest of the league. With Asik's contract expiring after the 2012 season and Gibson's set to expire a year later, the Bulls had to decide if they were willing to take on a hefty luxury tax payment to keep their bench together for a few more seasons with stiffer tax penalties looming under the new CBA.

You'll remember, the Bulls maintained keeping Asik was their No. 1 priority that offseason, but the front office seemed legitimately caught off guard when Daryl Morey put together that famed poison pill offer sheet to pry him away to Houston. That debacle caused more debate than any topic surrounding the Bulls in the last five seasons this side of #TheReturn, but it also opened the door for Gibson to stay.

Just before the deadline for early extensions, and after the first game of last season, the Bulls announced they signed Gibson to a four-year, $38 million extension. The ink had barely dried before some people were ready to call the move a mistake. Maybe everyone just missed Omer that badly.

It's true that Gibson struggled through the first two months of the year, but he found his footing in December and ended the year looking like the same player the Bulls deemed worthy of the extension. While many think Taj slipped a bit last season, his numbers look awfully similar to what he did in his first three seasons.

Gibson's points, rebounds, blocks, assists, shooting percentages and minutes were nearly identical from 2012 to 2013. His individual defensive rating did worsen from 88.6 to 97.6 last year, but much of that could be contributed to Asik. On the whole, the Bulls weren't only a much better defensive team when Gibson was on the floor last season, they were also a better offensive team.

It's clear that Tom Thibodeau has always had an affinity for Gibson, having him finish games instead of Boozer even during Boozer's first year in Chicago. The numbers only lend more support for Gibson. The Bulls went from a team with a 99.3 offensive rating (100 is average, higher is better) without Taj to a team with a 102.4 rating with him last season. Defensively, the Bulls were at 101.9 without Taj (100 is average, lower is better) and 97.6 with him.

It's obvious the Bulls are a better defensive team with Gibson's rim protection, but it might come as a surprise that they're also better with him offensively. (Conversely, the Bulls' offensive rating with Boozer was 99.3, and 102.5 without him. Defensively with Boozer, the Bulls were at 102.0, without him they were at 97.4.)

Gibson's shooting percentages didn't drop as much last year as some might think; in fact, they're pretty identical to 2012. Last year, Gibson took 219 shots at the rim and converted 64.8 percent of them. In 2012, he converted 64.6 percent of 198 attempts. Gibson was four percentage points better in 2012 from 5-9 feet on an almost identical number of attempts. He made 51.1 percent of his 51 shots from 10-14 feet last season, a higher volume and higher percentage by seven points when put against his 2012 numbers. From 15-19 feet, Taj slipped from a 35 percent shooter to a 29 percent shooter.

On the whole, Gibson's true shooting percentage went from 52.2 percent in 2012 to 51.8 percent in 2013. Taj Gibson is essentially the same player he's always been. 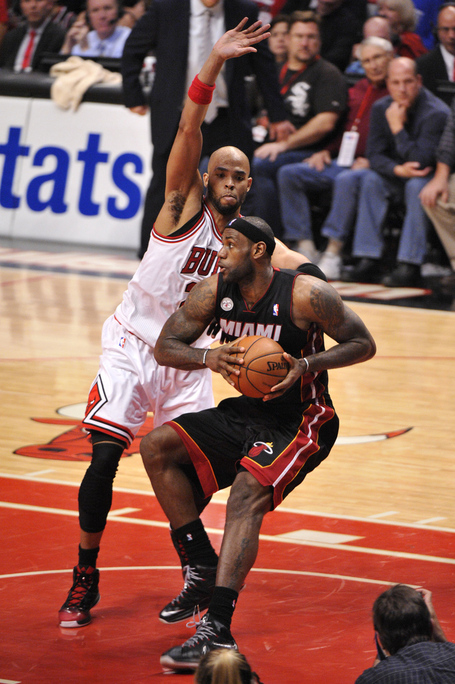 The issue isn't so much Gibson's play as whether the money he's making could be better served addressing other shortcomings on the team. Per ShamSports, Gibson makes $7.5 million next season, an even $8 million in 2015, $8.5 million in 2016 and $8.95 million in 2017. At least right now, I'm of the opinion that it's money well spent.

It's a fact of life that young veterans get paid in the NBA. The same year Taj re-upped his contract, Raptors guard DeMar Derozan signed for $10 million a year over four years and JaVale McGee signed for $11 million per year over the same length. Particularly for a rim protector and frontcourt player, labor does not come cheap. Gibson looks like a value buy when matched against many of his peers

In terms of fit, it isn't hard to argue that Gibson is pretty much perfect. For one, he saves the Bulls from playing Boozer in crunch-time. He could also log some minutes at the five this season in certain matchups should the Bulls choose to go small.

For the bigger picture: I'm not so concerned with the need for a second isolated scorer. What the Bulls really need to do is be great at what makes them good in the first place. That's defense. With Jimmy Butler, Deng and Gibson tied together by Rose and Noah, the Bulls have an ideal fourth quarter lineup to take on their conference rivals. Big, athletic, smart defenders aren't just a luxury in today's NBA, they're a necessity. As the upper-half of the East has taken a collective step forward this offseason, Gibson's strengths become even more valuable.

Gibson's defensive ability at the four will go along way when the Bulls need to matchup with Kevin Garnett and Andrei Kirilenko in Brooklyn, David West and Danny Granger (and Luis Scola) in Indiana and LeBron James in Miami.

Maybe Taj has never gotten much better on the cusp of entering his fifth season. Maybe someone making $8+ million per season should be logging more than 20-22 minutes a night. But if you accept the inevitable physicality of the East playoffs, I want Taj on the Bulls' side. If you can't have a star at every position, the next best thing is a player who can make life miserable for opposing stars. When I think about the Bulls' chances next year, the play and health of Gibson will go a long way in deciding how formidable they really are.