Marco Belinelli has agreed to a two-year, $6 million deal with the San Antonio Spurs, according to Adrian Wojnarowski of Yahoo! Sports. Belinelli's departure from Chicago was all but assured after the Bulls signed Mike Dunleavy Jr. on the first day of free agency. Belinelli reportedly had an offer for more money from the Cleveland Cavaliers, but chose to join San Antonio. Given what happens to most role players when they go to the Spurs, it seems foolish not to expect the 27-year old Belinelli to have the best seasons of his career in San Antonio.

I enjoyed the Marco Belinelli era in Chicago, brief as it was. Belinelli signed a one-year, $1.9 million deal with the Bulls as the de facto replacement for Kyle Korver around this time last year. His final numbers were underwhelming -- 9.6 points per game on 39.5 percent shooting from the field; a 10.43 PER -- but he hit a few game-winners, had some big games and generally passed the eye test. I'd say he more than lived up to his paltry contract despite the numbers.

Belinelli wasn't as good or valuable as Korver, but he did do certain things better. His ability to handle the rock and act as a primary ball handler in late game pick-and-roll situations really helped out if only because there were so many times no one else on the Bulls could handle such a duty. Belinelli only hit 79 three-pointers compared to Korver's 189 in Atlanta, but he was still second on the Bulls behind Nate.

Did we mention the game-winners? Let's relive them.

On the plus side, we'll never have to hear Stacey King's "I LIKE MY MEATBALLS SPICY" call again.

In times like these, I generally try to remember the good more than the bad with a player, unless that player is Chris Duhon (FUCK Chris Duhon). I will remember Belinelli for his kamikaze drives to rim, for the occasional Euro-step, for the clutch regular season moments. Mostly, I will remember him for this: 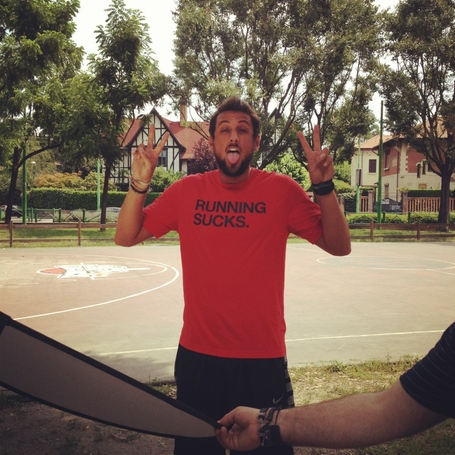 Good luck in San Antonio, Marco. You weren't great, but you were pretty cool.