Gorgui Dieng seems like the obvious pick at No. 20 if he's available.

The Chicago Bulls head into this offseason with two spots to fill: backup wing and backup center. These were roles were filled admirably last season, I suppose, by Marco Belinelli and Nazr Mohammed. No one knows if either will be back. Belinelli was playing for the bi-annual exception last year, a one year deal worth $1.9 million. He wasn't great, but the signing still worked out about as well as the Bulls could have hoped, especially given the price tag. Belinelli shot only 40 percent from the field, but had plenty of big games and gave the Bulls some direly needed long distance shooting.

Mohammed was serviceable as a reserve center once Tom Thibodeau finally gave him a consistent chance in March and April thanks to Joakim Noah's bout with plantar fasciitis. Mohammed was far from an ideal replacement for the dearly departed Omer Asik, though. For one, if he would have showed up in better shape and gained Thibs' trust sooner, perhaps Noah wouldn't have been tasked with averaging 40 minuets a game the first three months. The best thing you can say about the soon-to-be 36-year old is that he's a professional.

Tony Mitchell would give the Bulls home run potential 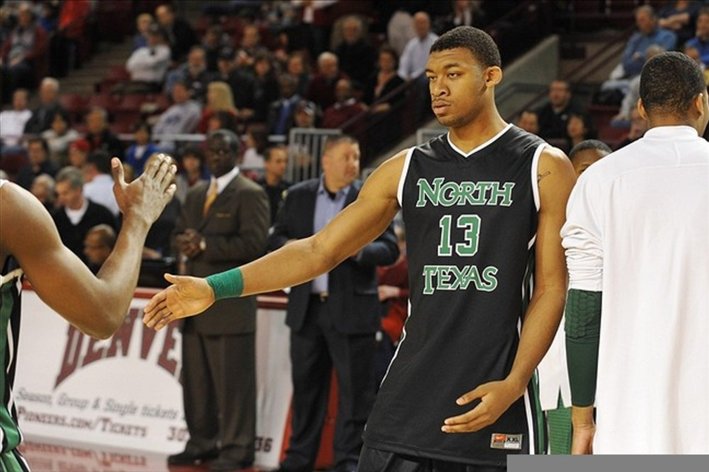 Tony Mitchell: the good, the bad, the fit.

If the Bulls are hoping they can find a way to bring Belinelli back on another cheap one-year deal, they're also hoping they can find an upgrade at backup center. Considering how cash-strapped the Bulls are going to be in free agency, the best way to fill the need might be through the draft. There are a few good looking big men who might be available when the Bulls pick rolls around at No. 20, but my favorite by a rather significant margin is Louisville's Gorgui Dieng (scouting report).

This draft has been roundly criticized for being weak, an opinion perhaps amplified by what's looking like the best draft since 2003 coming into the league in 2014. And while it's true that high school players could have gone 1-2-3 if they were allowed to enter the league and make their millions, that doesn't mean there aren't plenty of players that can help teams in this draft. The fact that Dieng is still largely projected to be available at the No. 20 pick speaks to that.

There's no reason a player of Dieng's caliber should be available at No. 20. If he is, the Bulls will be very hard-pressed to pass on him, regardless of my Tony Mitchell daydreams. I don't think Dieng will develop into a player as impactful as Asik, but he should be able to lock down backup center for whatever team drafts him. It seems like a player like Dieng could help every team in the league.

There are a lot of things to like. Despite playing the game for only six years, Dieng is considered pro-ready. At 6'11, 245 lbs., he's one of the few big men in this class I believe has the strength necessary to play the five in the NBA. While the 2.5 blocks per game he averaged isn't all that impressive compared to the 3.9 blocks per game averaged by Jeff Withey, Dieng's superior athleticism and length would seem to make him a much better bet as a rim protector at the next level.

You can make an argument that center is the most important defensive position in today's NBA, and doing it well takes a ton of repetition and coaching. There's reason to believe that a little Thibs dust could help Dieng reach his potential on that end.

Dieng broke out during Louisville's run to the national championship this spring, and the title game against Michigan showed what makes him such an intriguing NBA prospect. He has the foot speed and agility to hedge screens recovery quickly. When he switched onto Trey Burke at one point in the championship game, Dieng was able to deter his drive before blocking his shot.

The offensive end seems to have some potential, too. Dieng is regarded as a good passer with a developing face-up jump shot. It's always hard to project which players will continue to develop their skills and which will flatline once they reach the NBA, but Dieng showed steady improvement every year in college and by all accounts is a good guy who will accept coaching.

We know the Bulls like drafting players from successful programs. Should Dieng be available when they are up to pick, he would look like the obvious selection.

Omer Asik was great during his two seasons in Chicago, but he still only player 15 minutes per game. Fact is, crunch-time minutes belong to Joakim Noah. He's going to play 34 minutes a night at minimum. While there's certainly a great deal of value in having a competent replacement for when he gets a breather, selecting a backup center is generally aiming low. Mitchell vs. Dieng is a common but fascinating debate that comes up in the draft every year: swing for the fences or take a single? Given Noah's injury history, perhaps a solid young backup for him would be more like hitting a double.

Expecting too much from Dieng early could also be a dicely proposition, even if he does seem something close to pro-ready. The Bulls are gunning for the title next season, and they desperately need to be giving Noah some rest throughout the regular season. Would Thibideau trust Dieng right away? His history says he would not, but maybe need would force him into giving Dieng playing time if he seemed to be buying into the program early in camp.

It's also worth noting that rookie big men are just generally slow to develop. Look how long Noah struggled for, and he was a guy who was coming off back-to-back national championship game victories and had a better pedigree.

This part is flawless. The Bulls have a need at backup center. Dieng could develop behind Noah without a ton of pressure to be a big time contributor right away. The Bulls would need Dieng to be competent, but not much more than that. As long he picked up Thibodeau's pristine system of help defense and pick-and-roll blitzing, the Bulls would be satisfied.

It's still sort of hard for me to believe that prospects like Kelly Olynyk, Steven Adams and Mason Plumlee are going to get picked ahead of Dieng, though. That's what it would take for him to be available at No. 20. While most mocks right now have him going to the Bulls, I can't help but think it seems too good to be true. It only takes one team in front of the Bulls to throw a wrench into the entire equation.

If you're of the belief that a healthy Bulls team just might have enough to win the championship next season (I am cautiously optimistic on this end) then it certainly makes sense to use the draft to get a player who fills a need and might be able to help right away. That's Dieng. If he's there at No. 20, I would be very surprised if he wasn't the pick.