Nets vs. Bulls Game 6: Chicago's shot to wrap it up at home

Suggestion: the Bulls should win this game.

Share All sharing options for: Nets vs. Bulls Game 6: Chicago's shot to wrap it up at home

There was no protruding storyline that came out of Game 5 between the Bulls and Nets on Monday -- it was, mostly, just reasonably well-played basketball that Brooklyn played slightly better for slightly longer. Playoff games and the moments within them have a tendency to stick with us longer for obvious reasons, which makes Game 5 a bit abnormal: not even 72 hours later, it's difficult to remember what stood out. The previous four games in the series could be neatly packaged, at least to a certain extent:

What I do remember: the Bulls were within striking distance the entire game, heading into the fourth down 77-73 and getting it to within one on multiple occasions. Unfortunately for our shared rooting interests, Nate couldn't get scorching hot again and neither could any of his teammates, while the Nets decided to dominate the final four minutes instead of roll over.

That brings us to where we are today, Game 6, Bulls-Nets, the United Center. If Chicago wants to win the series, conventional wisdom says they should probably win tonight. I'm sure Brooklyn is a wonderful place to party, but we've seen enough of those doofuses already. Besides, with the second round series vs. the Miami Heat starting on Monday regardless of tonight's outcome, the banged-up Bulls need all the rest they can get. Game 6 is very, very important.

It's the last point that will hang over the Bulls all night: they're not only banged-up, they're actually injured. Yes, Joakim Noah and Taj Gibson will gut it out like they have been all series, their performances dependent mostly on how much cortisone their respective bloodstreams can handle. The more pressing worry is the status of the daring Kirk Hinrich, who missed Game 5 and still can't run. Safe to say the Bulls will be without the services of the captain tonight.

For as much shit as Hinrich (rightfully) gets from the good-looking folks who write and comment on this site, we all know the Bulls need him. In the regular season, the Bulls were 38-22 (shockingly good!) with Kirk; 7-15 without him. He might not be able to shoot, but we can say this about Kirk Hinrich: he's a professional, and sometimes that makes all the difference in the world. It's the same reason why Derek Fisher is a part of the 2013 NBA Playoffs, even if that notion is even more ridiculous. There's something to be said for a steady hand, for offensive and defensive awareness, and Hinrich has a claim to all that. At no point this season did we think the Bulls would be screwed without Hinrich, but here we are: if he can't go the rest of the series, can the Bulls win a game?

It is, I think, a weird fucking thing to ponder, all things considered, and it honestly makes me feel a little uncomfortable. There is always hope in numbers, though, and the numbers do show what the naked eye does not: that Williams has actually struggled more while being defended by Nate instead of Hinrich.

Via The Brooklyn Game comes this graph depicting Deron's shooting percentages vs. each defender: 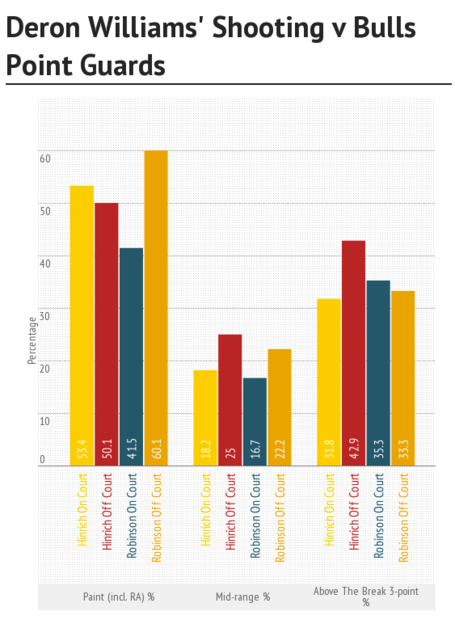 So, yeah: Deron is shooting 53.4 percent vs. Hinrich in the paint, just 41 percent against Nate. The only place on the floor he shoots better against Hinrich than Nate is from three, which probably speaks to how the Bulls attempt to defend the Nets star with each lineup: Hinrich bumps and grinds and plays up-close; Nate is more concerned about getting burned for layups and gives Williams plenty of room to shoot.

Williams' performance has been so uneven this series (he's shooting only 41 percent) that it's tough to say which Deron will show up for Game 6. One safe assumption is that the Bulls will have to deal with a mighty effort from Brook Lopez, who has somehow turned into a new age Tim Duncan this series: Bro-Pez is averaging 23.6 points, eight rebounds and 3.4 blocks per game on 49 percent shooting and 89 percent free-throw shooting, acting as the one-man run-stopping army Brooklyn's offense desperately needs. Brook Lopez is awesome and I don't know how I feel about it. I'd rather just make fun of his voice and comic book collection, not watch my favorite basketball team get owned by him again and again.

If the Bulls want to win, hey, maybe Luol Deng can make a freaking shot? Deng has been pretty awful this series, averaging 13.8 points and 7.6 rebounds per game on 38 percent shooting from the field and 5.6 percent shooting from three. That's right: Lu is 1-for-18 from deep this series, and that is embarrassing. Maybe it's also understandable too, though: Deng did just lead the league in minutes for the second straight year, and he's averaging nearly 45 minutes per game in this series. Tom Thibodeau has always seemed hellbent on grinding Deng and Noah to fine powder and here we are. Not saying Deng's poor performance is Thibs' fault, just that Luol Deng is basically the Ultimate Warrior and I don't feel like being hard on him right now, OK? But seriously: play better Deng, the Bulls need you.