Bulls vs. Heat game 3 altercations: more technicals and flagrants in this feud

Share All sharing options for: Bulls vs. Heat game 3 altercations: more technicals and flagrants in this feud

As I mentioned in the recap, the game was mostly well-played in the first half considering the caliber of defensive teams at work in this series.

But there were a couple of incidents, too. Which, of course, followed an ugly Game 2 and is now a very animosity-filled series. The beginning of the game saw no pre-tip handshakes and I don't think it'll get any better after Friday night.

First was a technical on Joakim Noah. After a foul from Chris Anderson that resulted in him landing on Nate Robinson, Noah came in and shoved Anderson off of his teammate.

Noah deserved the tech, and though I don't know everything Birdman was doing in that game/series to that point, in this instance it looked like he was getting off of Nate.

What may be the worst news of that play is that if the league is strict with their altercation rules (and they have been before in playoffs past), there could be one or two suspensions after this incident. NBATV's highlights showed Marquis Teague and Carlos Boozer coming off the bench after the Noah shove. 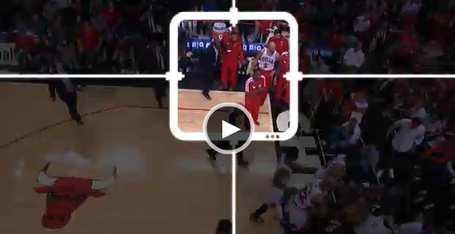 In the 2nd quarter we saw the Nazr Mohammed ejection, as he retaliated to LeBron throwing him down after a foul by outright shoving him to the ground.

This play has gotten a lot of attention since it was the MVP and all, but it's been overblown in my opinion. LeBron was given a tech for his shove on Nazr, for one thing. And if it ended there, it would've been a perfect instance of the Bulls playing 'physical' (i.e. a bit dirty but smartly within the context of the game) to try and derail James and get in his head. With LeBron on the break, and not everybody back on defense, Nazr knew this was a chance for a shot on LeBron (the kind of Nazr play KC Johnson always weirdly hopes for in blowouts), and Nazr went in hard and made it count, raking LeBron across the arms. Unfortunately he didn't keep his own cool after LeBron's reaction, and deserved to be tossed. Yes, Dwyane Wade once did the same thing to Rip Hamilton in a regular season game and wasn't thrown out. No argument here: Wade should've been.

Now, I don't think LeBron was exactly being as tough as a person who writes or comments on a basketball blog and tried to do his best to 'stand his ground', but in my judgement this wasn't a flop. It was him not expecting a shove from a huge dude. He's obviously big himself, but looks to be off balance.

What gets me is that the focus is on that 'flop', which has nothing to do with the referees, in a game where there were numerous actual bad calls. Specifically a couple on Butler as he defended LeBron and one of the 'over the back' calls on Joakim Noah.

Thibs mentioned 'not getting calls' postgame, but though he didn't specifically mention those whistles he did talk about LeBron flopping. As did several Bulls. As to why, I think Adrian Wojnarowski is on to something when saying that this is mostly a strategy by Thibodeau to galvanize his team. They're obviously out-manned, and need the refs to let a lot go to help them narrow that gap through physicality. But it's an easier way for Thibs to gain focus from his team by painting James as an entitled league golden boy who'd fall to the Bulls pressure....if only the league would allow the Bulls apply it. Charles Oakley once kneed Michael Jordan in the groin and punched his adams apple, and that dude didn't even go down!

That theory is not actually true, but Woj makes the point that Thibs has to make the Bulls believe it. Unfortunately, the result of these past two intense hate-filled games is that instead it's been the Bulls who have cracked under the pressure.