We can't move on to Game 5 before giving one last look at the zaniness of Game 4.

Share All sharing options for: NBA Playoffs 2013: An appreciation of Bulls-Nets Game 4

It almost seems cruel that the Bulls and Nets have to revive their first round series tonight, with a victory giving Chicago the four wins required to advance to the second round for a date with the Miami Heat. Game 5 will produce its own narratives and present its own set of problems just like every other game of this frankly fantastic series, and those storylines and those problems will soon consume everyone's minds because this is how sports work. But before we can fully move onto the next one, we can't let Game 4 pass without proper homage.

That was, I think, the type of mind-melting game we as sports fans are fortunate enough to witness only a handful of times per decade. It's the reason you watch all of those Wednesday night affairs in February against Orlando on the second night of a back-to-back, with nothing really at stake. You do it so that when something like Game 4 happens, you feel like you earned it. You paid your dues and cut your teeth on Daequan Cook bricks to earn the right for something like Game 4. The only historical precedent in recent Chicago sports history I can think of is the Bears' wild fourth quarter comeback against the Arizona Cardinals in 2006, the game where Rex Grossman threw four interceptions and the Bears overcame it by scoring three non-offensive touchdowns to steal a ridiculous Monday night victory. Game 4 against the Nets was no less insane. Thank heavens the Bulls came out on the winning side.

The craziness started with exactly two seconds left in the third quarter when Brook Lopez hit a turnaround, fadeaway three to give the Nets an eight-point lead heading into the fourth. It was...the first three-pointer he had ever made in his pro career. Seriously. At the time, that moment looked like it was the type of improbable scenario that swings a close game, puts the edge in Brooklyn's favor and gives them an adrenalin boost heading into the fourth. In hindsight, it seems like the only purpose of Lopez's three was to foreshadow all the craziness that would come next.

The obvious starting point for the fourth quarter was C.J. Watson's blown dunk. The Nets were up 109-95 with 3:15 remaining when this happened:

OK, so: 109-95, 3:15 left, C.J. Watson misses a breakaway dunk. What comes next is bit of coaching brilliance from Tom Thibodeau, the type that might as well be immediately added to his canon. With the Nets in control after the miss and every player from both teams hustling back (save for Jimmy Butler who was already there. Another game-saving moment), Thibs orders Carlos Boozer to intentionally foul Reggie Evans. It was as much about the clock and possessions as it was about Evans' own free throw woes (a 50 percent foul shooter this season), and it worked perfectly: Evans botched both shots and the spotlight was ready to shine on Nate Robinson.

A few words before we get to Nate:

So, Nate. Nate, Nate, Nate, Nate, Nate. Was that the most memorable individual performance for a Bulls player since....THE FLU GAME!?! Ben Gordon probably has something say about it (a game or two against Boston in that 2009 playoff series, in particular), and of course D. Rose has had his moments too, like hanging 44 points on the Atlanta Hawks in 2011 playoffs. I'm just saying...Nate's Game 4 is in the discussion. It was that incredible.

23 points in the fourth quarter. Three more buckets in overtime, including that thoroughly bonkers runner from the 21-feet away that looked like it was going to give the Bulls victory in the first overtime. Nate has always been ridiculous, but Game 4 was something else entirely. So, with a tip of the cap to Mike Prada, let's look at the degree of difficulty on some of these fourth quarter shots.

Nate already had five fourth quarter buckets before Watson's missed dunk and the start of the eventual comeback. For his sixth, he spun around a screen and hit a three in Lopez's face: 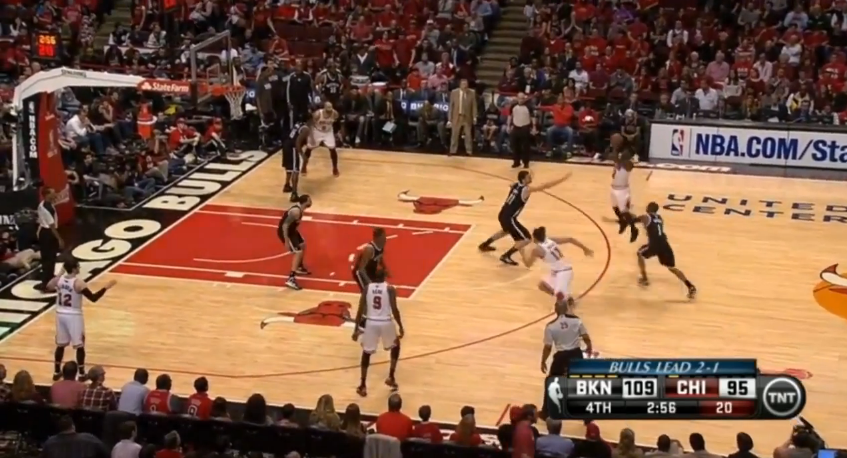 Wide open look, Lopez wasn't quick enough on the help. Obviously everything from here on out was a 10-out-of-10 in terms of how crucial it was; if any of these shots miss, the Bulls lose. Thank goodness this one fell and the Bulls could roll over the momentum.

Next came Nate taking a high screen from Noah finishing this layup over Lopez: 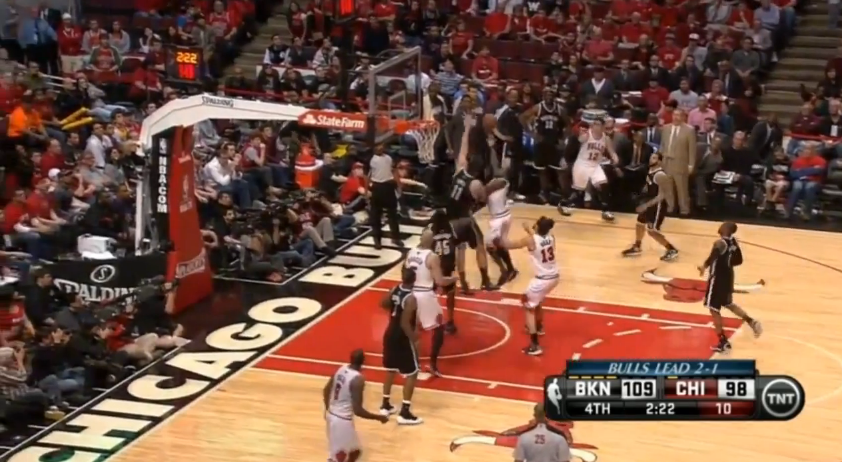 No idea how he hit this shot.

At this point the Bulls are obviously trying to get Nate the ball. Nate's entire career has felt like one long heat-check, but that was particularly the case in Game 4. For his next trick, Robinson comes off a circle, gets to the center of the lane and hits a jumper: 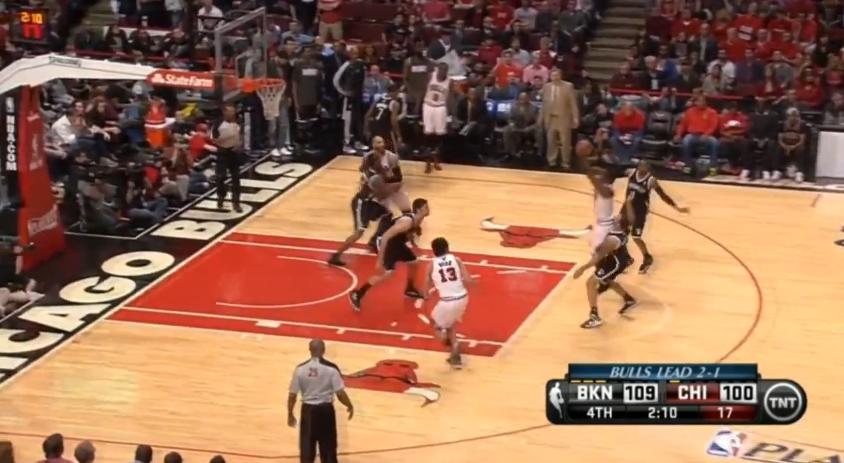 By the time the Bulls get the ball back, all bets are off. It's 109-102 and Nate is unconscious. He keeps doing stuff like this: 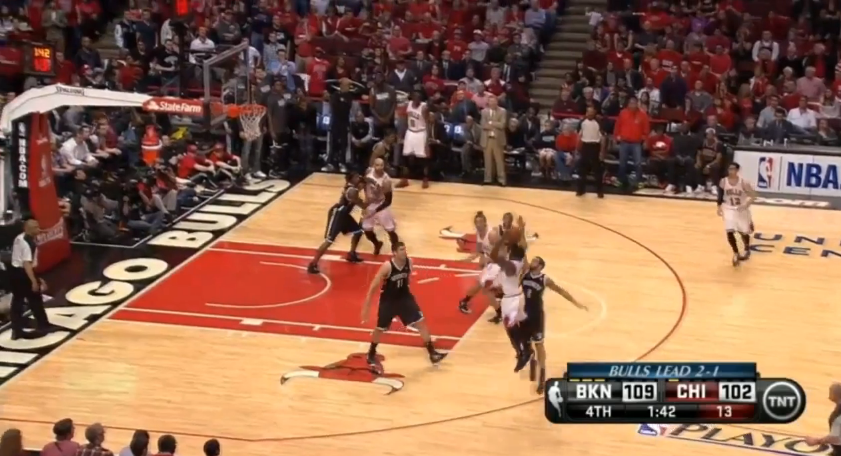 This was where Nate earned three free throws and knocked down all of them. This was a total "NO, NO, NO, NO, NO....YES" moment, the type that has really typified Nate's career. 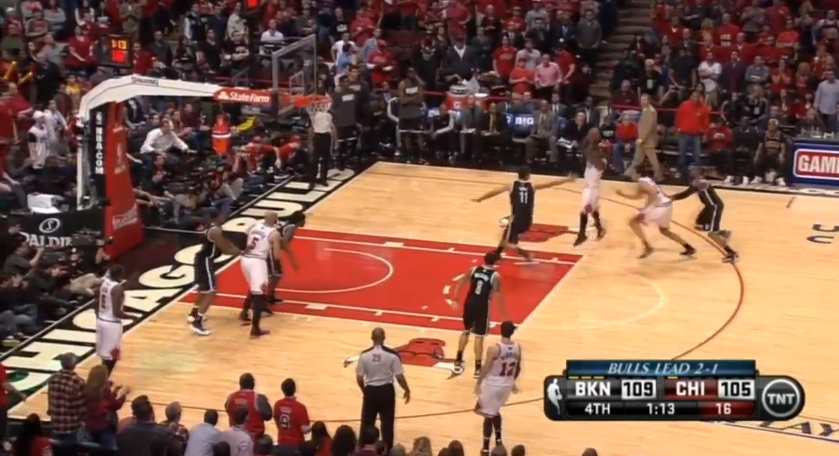 Off the high screen, using his ball handling to create space and hit a jumper. I don't know how this keeps happening but it does so lets just go with it.

The next play, the one that ties the game, is Nate finding Boozer for the up-and-under layup, which can probably claim a 9 or 10 on the difficulty scale itself. Nate wasn't done, he had a right elbow floating jumper in OT to tie the game with a minute left, and then the crazy runner to put the Bulls ahead two with under two seconds remaining, which was about a 12-out-of-10 on the difficulty scale.

Nate's effort was so astounding that it's easy to lose sight of everything else that happened after. But there were plenty of other important things that happened! Here a few that stand out: