courtesy of The Bulls Show

[For a serious, well-reasoned take on the Rose situation, make sure you check out Ricky's work at SBNation.com. The following is not intended to be that -yfbb]

The first two games in the Bulls' playoff series against the Brooklyn Nets have been a microcosm of a long, unpredictable season. In game 1, the Bulls were who we thought they were this past summer without their superstar point guard and an overhauled bench that sacrificed depth for dollars. The Bulls then followed-up that abysmal playoff opener with an inspiring game 2 performance full of grit and guts. Looking ahead to the rest of the series, your guess is as good as mine on whether this Bulls team can advance to the second round.

The 2012/2013 Chicago Bulls are a box of chocolates. For every high, there's been an equivalent low.

Ultimately, this season will be remembered in the franchise's history for these five narratives, in ascending order:

If anything, the only consistency of the season has been the uncertainty. Of course, that uncertainty has been best encapsulated by the final bullet point above. The pervasive and ongoing storyline has been if and when will Derrick Rose return? While a glimmer of hope remains that Rose, a true role model for adolescents struggling with their virginity (i.e. he feels great, but is just not ready), may come back for these playoffs, a more realistic scenario has the former MVP playing again in October.

This harsh and disappointing reality will forever cast a dark cloud over the Bulls 2012/13 campaign. The Rose-related off-court activity has been just as engaging and scrutinized as any of the team's on-court results.

Nevertheless, despite zero games played, Rose has had an eventful season - a season without a definitive timeline or objective, but one that often raised hope and promise. A season, through a different lens, had its own share of "highlights."

Not only can he walk, but he can run again in such flawless and unparalleled Olympic style form!

A week and a half after Derrick told local reporters that he'd be ready to play professional basketball again once he was able to "dunk off stride, " the injured point guard was shown on national television putting down this double pump, two handed slam. Unfortunately, the dunk was a bit of an illusion. Rose jumping off and landing on his healthy right leg suggested the return was not imminent.

I should disclaim the majority of "plays" on this list ultimately elicited unsubstantiated optimism of Derrick's return, but none may have created as much buzz as Rose returning to the bench to support his teammates against the Pacers. For the first and only time during the regular season, Rose was visible and engaged during an actual game, albeit in street clothes. Rose's presence, as much as the explosiveness he demonstrated in standing up to cheer, practically hinted that his comeback was near.

Rose addresses the media and claims "nobody knows (my return date) but God" - a savvy move by the 4th year veteran to establish the ambiguity surrounding his progress. This religious version of "I don't know" may have increased Church attendance by Bulls fans and seemingly implied the celebration of a different resurrection on Easter Sunday against the Pistons. While that wasn't the case and I may be sentenced to eternal damnation for this shallow "analysis," I'm just thankful that God is in fact NOT Wack Flocka Flame.

After the Bulls defeated the Heat in Miami earlier this year, a photo was captured of the elusive Rose peaking behind a wall... a move that can only be executed with tremendous body control. 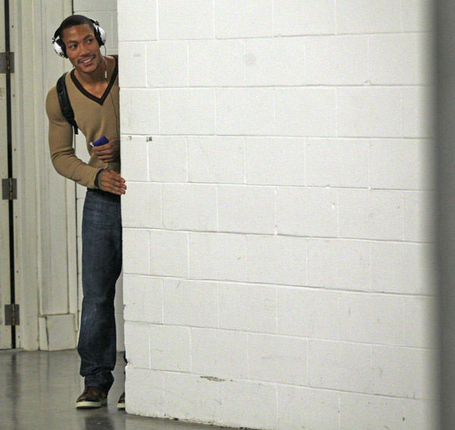 The image not only literally and figuratively indicated Rose was just around the corner, but set off a new genre of fun internet memes.

In vintage Derrick Rose fashion, the former league MVP attacks the basket off the dribble from the top of the key, gets by both defenders and finishes with the acrobatic layup! The only problem is that said defenders comprise of Bulls assistant coaches, including former NBA player Adrian Griffin, offering minimal resistance (skip to 0:32)

While the prevailing tone of this list is intended to be satire, I'd be remiss if I didn't genuinely acknowledge and commend Rose's humanitarian effort in the wake of tragedy. Last month, the Bulls guard offered to subsidize the funeral of a child recently murdered in Chicago - allegedly (and sadly) not the first time Rose has made the financial gesture in a community often devastated by violence.

Yet, somehow some fans still claim they've lost respect for Rose and continue to question his character due to #TheDelay. Fans, man.

Maybe the Bulls just granted Rose 12 month paternity leave? If fatherhood is preventing the Bulls star from returning to the United Center floor, at least Rose is using his time effectively to swag out Pooh Jr. in miniature tuxedos. Check out Rose posing with his newborn son to usher in 2013 on New Year's Eve. 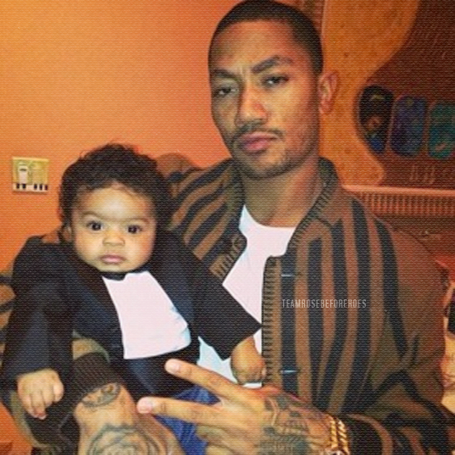 In the first observable action versus NBA-level competition since the injury, Rose gives us a glimpse of his refined repertoire during a one on one, king of the hill-type drill at practice. Of course, the term "NBA-level competition" is used loosely when referring to bench warmers Vladimir Radmanovic, Daequan Cook, and Malcolm Thomas. Regardless, Rose appears to have won the contest and probably posted an offensive efficiency rating of 182 or something like that.

Derrick Rose effortlessly throws down a thunderous right handed dunk, off his rehabilitated left foot no less, during a pre-game work out earlier this month. He may not be mentally ready, but he looks physically ready. I mean, that poor Pistons ball boy under the basket might as well be Joel Anthony.

Dishonorable Mention: As alluded above, #TheReturn may have sold shoes, but maybe borderlined on false advertising. Despite its captivating footage of Rose's offseason regiment, the six part, open-ended web-series would have been more appropriately titled #TheRehab.

Honorable Mention: Possibly lost in #TheReturn shuffle was this Adidas clip that at least I've never seen before. Upon first glance, I thought this was an old video of Derrick playing basketball against his mom, Brenda. Instead, Rose and his Adidas team entertained a Scottish college student named Brendan during his visit to Chicago in December 2012. A nice gesture made even more peculiar for its brief footage of non-Adidas sponsored athletes (Jordan, Boozer, Nate). Regardless, Brendan's encounter with the Bulls' MVP doesn't crack Rose's top 10 "plays" of 2012/13 because getting beat by a portly foreigner in HORSE and one-on-one is never a good look, no matter your current stage of rehab.

Did Rose have a better "play" during this godforsaken season not included in the list above? Let us know your thoughts in the comments.