Bulls vs. Nets playoffs: Williams, Lopez take it inside on the Bulls

Share All sharing options for: Bulls vs. Nets playoffs: Williams, Lopez take it inside on the Bulls

Things started out poorly from the outset for the Bulls in game one. We know that the Nets are a quick-starting team and they held up to that reputation. But in this outstanding performance Brooklyn kept it up for the whole half, with some staggeringly dominant play: essentially, while the Bulls tried to keep pace with long two-point jumpers (Boozer had a really nice half, but even his makes were all on the outside as well), the Nets were killing inside and at the foul line.

Look at this first half Nets shot chart, then bleach your eyes (via BullsByTheHorns): 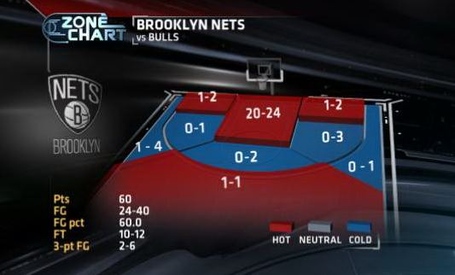 Brook Lopez was dynamite with 19 of his 21 points coming in that half. The first evidence that Joakim Noah wasn't close to full-strength was his inability to keep with the lumbering Lopez on a (estimated) 14 foot, 22 second drive to the basket early in the game. Lopez simply would shoot over Taj (who had 2 quick fouls) and Boozer when that was tried, and though Nazr Mohammed at least looked the part, he also showed little resistance.

Lopez wasn't scoring much on post moves as he was simply making himself available to a penetrating Deron Williams. We all heard about Williams re-ascension to superstardom in the second half of this season, and he played like it tonight. The Bulls started Jimmy Butler on Williams the first possession but it didn't look to be the consistent plan, since later Kirk Hinrich as expected received the bulk of the assignment. This was supposed to be a matchup the Bulls could at least limit the damage in, but Hinrich looked overwhelmed trying to even contain Williams, and was a total zero offensively (0-3, 2 points in 27 minutes). When Butler did take his turn he was no better, including guarding what was a dynamite finish to the half by Williams when he blew by Jimmy out of isolation. And when Nate Robinson had to give it a try...just blink, and Williams was gone. Hinrich's thigh bruise doesn't seem like a multi-game injury, but it's probably something we'll know a lot more about after a day of rest. He was bad, but the alternatives aren't much more appetizing.

The bigger problem wasn't individual assignments on a Williams in the half-court as it was when Williams would push the ball in semi-transition, something we were warned of before this series began. Williams was aggressive yet patient, with an ability to drive and make fantastic passes, and he was 2-3 from three as well. Again: he was a superstar on Saturday night, looking like the guy who was once a top-3 PG in basketball. Finished with 22 points on 15 shots, with 7 assists and a team-high +24 when he was on the court.

And you see at the bottom of that graphic above, the Nets were 10-12 from the line in the first half. Meanwhile, until a brief spurt of aggression with 2 minutes left in the half by Marco Belinelli the Bulls hadn't shot a free throw at all (outside of a technical). Around that same time Belinelli also had the Bulls first three-pointer after a whopping three attempts so far in the game. Combining a lack of points from both lines with no offensive rebounding (credit to that awful Reggie Evans, though the Nets didn't do much in that department either) as well as zero points off of turnovers, and it made for the terrible half we saw.

In the second half, the Bulls actually played a lot better offensively, and at one point into the 4th quarter they were shooting 60% themselves. But the damage had already been done, and the defense didn't shore itself up much at all, merely trading baskets and winding up actually with only adding two more points to the overall deficit. At the end of the 3rd quarter Deron Williams punctuated the Nets night (4th quarter really didn't count...) with this strip and reverse (really?) dunk. Kind of awful to see from a Bulls fan's perspective. What may have been worse was how the Bulls responded, with several seconds left on the clock the team just walked while Nate Robinson confusedly dribbled the ball up and shot only after the buzzer sounded. It was a weird show of fatalism from a team where that's usually unheard of. But it's tough to blame them much, given they had to actually live what we merely watched.