The Bulls have two regular season games left. One is tonight against the Magic.

Share All sharing options for: Bulls vs. Magic preview, weekend roundup and more

The Chicago Bulls face the Orlando Magic in the penultimate game of the 2012-2013 season on Monday night at the Amway Center. The Bulls are going for the four-game sweep of the Magic, but it certainly hasn't been easy. The Bulls' three previous wins have come by a combined margin of nine points. Most recently, the Bulls knocked off Orlando 10 days ago at the United Center when Nate Robinson scored 12 of his 19 points in the fourth quarter to help Chicago steal a one-point victory in a downright ugly game.

It's still all about playoff seeding for the Bulls, who enter Monday as the current No. 6 seed in the Eastern Conference, trailing the Atlanta Hawks by one game. Each team has two games remaining:

The prize for the winner of that coveted No. 5 seed? A first round playoff date with the Brooklyn Nets instead of the Indiana Pacers. I was briefly on the 'get the six-seed, avoid Miami until the Eastern Conference Finals' bandwagon, but I've been convinced that the five-seed is definitely preferable. The Bulls finished 1-3 against the Pacers this season and David West and Paul George have a history of giving Chicago fits. This blog has been harping on the Nets are frauds for most of the second half of the season; the Bulls finished 3-1 against Brooklyn and would be the favorite in a playoff series even without home court advantage. A series against the Pacers would favor Indianapolis, probably.

So yes, the Bulls want to win tonight. Back-to-backs are never easy, particularly this late in the season for a team as ravaged by injuries as Chicago, but any game vs. the Magic counts as winnable. The Magic enter the game No. 27 in points per 100 possessions and also have the sixth worst defense in the league. Orlando has lost 14 of their last 16 games.

The matchup to watch tonight is Tobias Harris vs. Jimmy Butler and Luol Deng. Harris came over in the J.J. Redick deal and suddenly looks like a franchise cornerstone for the Magic. The third-year forward, still just 20 years old, is coming off scoring efforts of 22 points against Boston, 30 against Milwaukee and 26 against Cleveland in his last three games. Harris is averaging 19.8 points and 11 rebounds on 43.5 percent shooting from the field in April. At 6'8, 225 lbs., he has the type of size Butler and Deng will see in the playoffs.

It's important to note just how bad the Bulls have been against bottom-feeders this month, something they could very much come to regret if they end up with the No. 6 seed. It's easy to remember gutsy, streak-stopping victories over the Heat and Knicks lately, but the Bulls also have April losses to the Wizards, Pistons and two against the Raptors. Hopefully the Magic aren't the latest bad team to join that list.

-- Is it too soon to talk draft? NEVER. Georgia's Kentavious Caldwell-Pope is an awesomely named shooting guard who entered the draft today. Chad Ford's latest mock had him going to the Bulls with the No. 19 overall pick. Caldwell-Pope is a former McDonald's All-American who was weighed down by horrible teammates at Georgia the last two seasons. The 6-foot-5 guard averaged 18.5 points and 7.1 rebounds in his sophomore season for the Bulldogs, shooting 43 percent from the field and 37 percent from downtown. Dude shot seven three-pointers per game this season.

The Bulls are obviously in need of a backup center moving forward, as well. The top three of my Bulls draft wish list at the moment would probably be Caldwell-Pope, Kansas center Jeff Withey and Louisville big man Gorgui Dieng, in some order.

Defending without fouling is huuuuuge, obviously.

-- One of my favorite quotes of the year came after the Bulls' big win over the Knicks. Here's Carmelo Anthony on our good friend Carlos Boozer:

"Boozer is Boozer," Anthony said. "Sometimes I don’t think Boozer be knowing what he be doing out there as far as clearing out and the way he plays. He’s so wide, shoulders is wide, elbows just be flaring. I think sometimes he doesn’t know what he’s doing out there."

Well put. A quick look through the photo tool revealed a couple other times recently Boozer did not know he be doing: 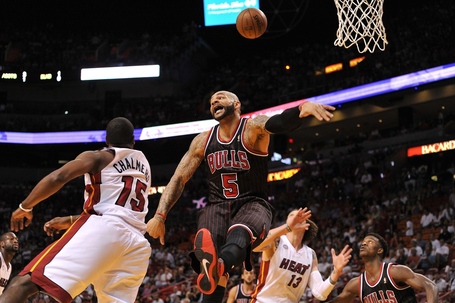 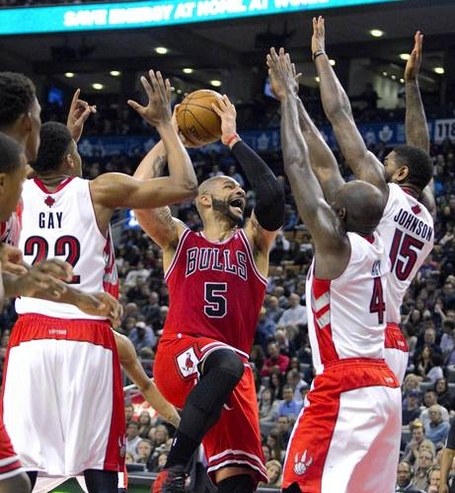 Second photo comes via the Tribune and Fred Thornhill at Reuters

Reminder: it is always appropriate to laugh at Carlos Boozer.

-- Finally, if you missed it on Friday night vs. the Raptors like I did, here's video of Nate doing the most Nate thing ever and trying to steal a jump ball from the much taller Rudy Gay:

Bulls-Magic tips off at 6 locally.