How Jimmy Butler got his buckets

Jimmy Butler scored a career-high 28 points on Tuesday against the Raptors.

Share All sharing options for: How Jimmy Butler got his buckets

Watching the Bulls has been an exercise in patience for so much of this year. Patience with Derrick Rose. Patience with the dramatic mood swings of Nate Robinson. Patience with Tom Thibodeau's irrepressible desire to grind Luol Deng and Joakim Noah into a fine dust before this campaign mercifully ends. But there's no question that the development of Jimmy Butler has been the most pleasant thing about an otherwise strenuous season. On Tuesday night against the Raptors, Butler took everything he's been building on this season and it culminated in the best performance of his career.

Without Rose, Noah, Deng and Taj Gibson, the Bulls needed Jimmy Butler more than ever. The notion was not lost on Thibodeau. Butler never left the floor on Tuesday night, playing all 48 minutes. He defended Toronto's best player (Rudy Gay) the entire game and acted as the focal point of the Bulls' offense. Butler would end the night 10-of-12 from the field to finish with 28 points, seven rebounds, two assists and two steals. The Bulls lost in a final sequence that was destined to be soundtracked by "Yakety Sax", but the effort from Butler was almost enough to trump the result. Besides, I'd rather have the Bulls get the sixth seed anyway.

As Jimmy was putting the finishing touches on the game of his life, our good friend Sam Smith tweeted "Jimmy Butler has 28 points and it doesn't appear the Bulls have run a play for him yet". I'm no Mike Prada, but that struck me as inaccurate. So I decided to go through all 10 of Butler's field goals using the NBA's media video tool to see just how Butler was able to achieve his career-high.

Hint: the Bulls ran a few plays for him. Here's the final breakdown on Jimmy's buckets:

Let's take a look at each basket individually:

Field goal No. 1: Off a made basket by Toronto, the Bulls start the possession with a left wing pick-and-roll between Kirk Hinrich and Butler. Butler gets the pass and misses his first shot of the game, a 16-foot jumper from the baseline. Malcolm Thomas gets the offensive board and the Bulls restart the possession. Jimmy sneaks to the left corner and Kyle Lowry gives him too much room. Kirk gets Butler the ball and he hits a corner three in Lowry's face.

Field goal No. 2: In the halfcourt, Jimmy starts at the right corner. He runs to the top of the key and Thomas screens his defender (Gay) to give him an open driving lane. Jimmy takes it to the hoop and finishes over Jonas Valanciunas for the and-one.

Field goal No. 3: This is the one I'm deeming semi-transition. Toronto air balls their offensive possession and the Bulls start the break. Marco Belinelli pushes it to Nate Robinson on the right wing. Butler's defender leaves him to contest Nate's likely three-point attempt, but Robinson swings it to Butler in the right corner. He knocks down his second corner three of the game.

Field goal No. 4: The Bulls get in the halfcourt and run a play for Jimmy to get it down low. He starts in the right corner and cuts to the basket. Boozer is in the high post and makes the entry pass. Jimmy finishes over Gay and Amir Johnson for the and-one.

Field goal No. 5: Jimmy rebounds a John Lucas III miss. As he grabs the rebound, four Toronto players are even with him or ahead of him. Doesn't matter. Butler pushes the ball down the court and finishes with a layup over Quincy Acy.

Field goal No. 6: Halfcourt possession, Jimmy makes a circle cut to the basket around Boozer, who's standing at the top of the key. Jimmy starts to jet out to the right corner for a three, but then cuts inside. Boozer hits him with a pass and Jimmy finishes over Rudy Gay. Nice bit of misdirection by the Bulls.

Field goal No. 7: Butler punches it away from Gay in the low block and Boozer recovers to kick-start the break. He pushes it to Hinrich who throws the lob to Jimmy from the top of the three-point. Jimmy finishes with the dunk.

Field goal No. 8: The Bulls run Rip Hamilton off a curl from right-to-left, with Butler setting the downscreen. Butler sneaks out to the left corner. Rip gets the pass from Nate at the left free throw line and makes a nice pass to Jimmy, who knocks down another corner three.

Field goal No. 9: Broke play. Jimmy recovers a bad pass from Hamilton at the left wing and drives to the hoop. He finishes the layup over Johnson.

Field goal No. 10: In the halfcourt, Jimmy backs down Alan Anderson, then takes him iso. He dishes to Nazr Mohammed, who misses the 12-foot baseline jumper, but Jimmy gets the rebound and finishes the mid-air putback.

Here's a look at Jimmy's shooting chart for the night: 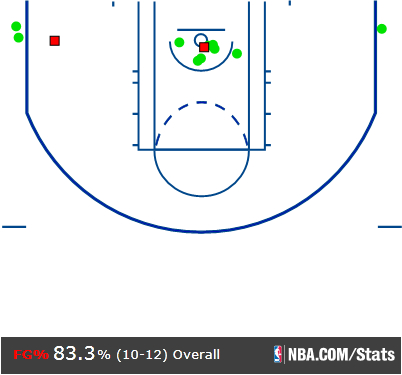 Just a tremendous effort. I've seen all the "shooting guard of the future" talk in the comments, and it's easy to run with that after a game like this. Shooting guard has always been a problem area for the Bulls; it's hard to even recall the last athletic wing they've had. But I do think it's worth pointing out that Thibodeau said when Deng and Butler are in the game at the same time, Lu plays the two and Jimmy plays the three.

Does that mean anything? Do the Bulls not fully trust Butler's handle and shooting ability yet? Does it mean trading Deng is inevitable? Whatever. We'll worry about all of that later. Butler had the best performance of his career last night, let's spend the day enjoying it.