Kirk Hinrich has been pretty effective running the show for the Bulls this season, but myriad nagging injuries has forced him to the sidelines far too often.

Share All sharing options for: The bizarre saga known as Kirk Hinrich's 2012-13 season

Strained groin, strained hip, bum thumb, sore knee, sprained left elbow, cut/infected right elbow, sore toe and falling down an abandoned well. Those are the myriad maladies that have befallen Bulls point guard Kirk Hinrich in a rather bizarre year that has already forced him out of 16 games during this 2012-13 season.

It's set to be a 17th missed game, as Hinrich will likely sit out Wednesday night's contest against the Spurs with the sore toe. This latest injury is especially weird, given nobody really knows how it happened. Not even Hinrich himself. Supposedly, after playing 39 minutes in the win over the Nets on Saturday (preceded by games of 40 and 33 minutes, hmm....), Hinrich woke up the next morning and could barely walk. He has been in a walking boot the past few days, and who the hell knows when he will be back.

The slew of injuries are obviously frustrating for Kirk and the rest of the team, and they're also especially frustrating for those of us around Blog a Bull that pretty much saw this kind of thing coming when he signed this offseason. Sure, I'm not going to lie and say I expected THIS many injuries, but there were signs of Hinrich breaking down the past few years. Besides the fact that he mostly sucked in Washington and Atlanta, the injury concerns were one of the other biggest reasons I wasn't too keen about Hinrich making his "triumphant" return to Chicago.

Of course, the return of Hinrich seemed almost inevitable (house in the area, duh), so I was prepared to begrudgingly accept it when it was first announced that the Bulls had reached a deal with him for two years at the mini-MLE. But a few weeks later the real hammer dropped when out of nowhere, it was announced that Hinrich had signed a two-year, $8 million deal. An alleged "bidding war" had broken out between the Bulls and Bucks over the services of Hinrich, and since the Bulls (and Derrick Rose apparently) absolutely had to have their prodigal son back, they cut into their full MLE to acquire him. As we have harped on many a time on this site, that hard-capped the roster and robbed the Bulls of some of the "flexibility" that the front office likes to throw in our faces time and time again.

We can rehash everything that possibly could have been done instead (keep C.J. Watson instead, trade for Kirk in the Kyle Korver deal, push harder for O.J. Mayo, whatever), but at this point, I'd rather not go too much into it. The Bulls obviously had their eyes set on Hinrich from the start, and once his price was driven up, they felt it was necessary to see this thing through.

Naturally, the injuries began almost right off the bat, with Hinrich missing time in the preseason with a few different problems. And when he was on the court, our worst fears about his play were confirmed as well, as Kirk was one of the worst players in the NBA the first month or so of the season. The guy was barely cracking 30 percent shooting overall, and was under 30 percent on three-pointers. His PER was hovering around a barely competent 9. Just awful.

But while the injuries have continued to pile up throughout the year, Hinrich has come around a bit when he actually sees fit to grace us with his presence on the court. He's shooting 44.1 percent from three since Dec. 1, which is really important on a team that has a serious dearth of three-point shooting.

Perhaps most important, however, is the fact that the team just runs better when he plays. It's something we hear ad nauseam from the broadcast team when he's out, but while Neil and Stacey are often over the top with their praise, they are mostly correct. For the year, Hinrich has a net rating of 4.2, which is second-best on the team. When he's off the court, the Bulls' net rating is -1.0.

The Bulls are 29-15 with Hinrich this year and 5-11 without him, and their recent skid coincided with him missing a bunch of time due to his strange right elbow injury. But before some go casting MVP votes, there's something that needs to be noted (and was by Fred Pfeiffer of Chicago Bullseye): so far in 2013, 11 of Kirk's 12 missed games have come against playoff teams, yet he has played in 10 of the 11 games against losing teams.

Would the Bulls have fared better against some of that better competition with Hinrich in the lineup? Perhaps. I don't think it would be too far-fetched to speculate that the Bulls would have a couple more wins under their belt if the guy actually stayed healthy. He certainly wouldn't have made much difference in those brutal losses to the Heat, Thunder and Nuggets, but maybe he helps grab a win in one of those Pacers games? Or that hideous defeat to the Celtics where the Bulls scored 69 points? Maybe? I don't know.

Whatever the case, it has become apparent this season that without Rose, the Bulls kind of need Hinrich manning the point. And arguably the biggest reason why is because he's not Nate Robinson or Marquis Teague. Hinrich brings stability to the team because he does things any decent floor general should do, whereas Nate and Teague are not as trustworthy.

But ultimately, Hinrich can't really be trusted either, because he can't seem to escape that gosh-darn well (thanks to my brother, @chifanpatt1, for making this): 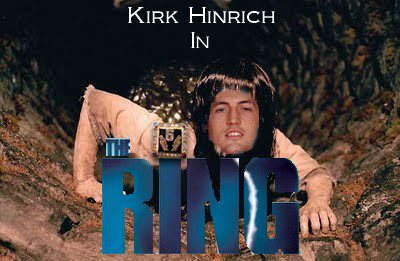 So it's definitely a good thing that Rose is likely (or is it hopefully?) coming back soon, although that obviously is a good thing no matter what. Any guesses on what body part Hinrich injures next?

All stats from NBA.com