The Chicago Bulls won their fourth straight game on Saturday afternoon in Dallas, defeating the Mavericks XX-XX. It's the longest winning streak of the season for the Bulls, one distinct by uncharacteristically strong offense. The victory in Dallas was no exception.

The Bulls' winning streak is no more. Dallas closed the game on a 15-1 run, taking their only lead of the second half when Dirk Nowitzki hit his fifth three-pointer of the night to put the Mavericks ahead two following a crucial pair of missed free throws by Jimmy Butler. Nate Robinson's wild last second attempt clanked off the rim and the Mavericks were able to steal the game 100-98. It's a heartbreaking loss for Chicago after playing so well for so much of the game.

The Bulls were up 12 with 4:07 to go, building a big lead behind the hot shooting of Nate Robinson. Robinson went 7-for-7 from three and 9-of-16 overall to finish with 25 points. Dallas double-teamed Robinson down the stretch and Chicago went cold without his gunning. The Bulls missed three layups, a couple jumpers and turned the ball over twice in the last four minutes to allow Dallas to come from behind.

The Bulls had no answer for Dirk, who scored the Mavs' last eight points, including the go-ahead three when Luol Deng foolishly left him alone at the top of the key. Dirk finished with 35 points on 14-of-17 shooting, hitting a variety of impossible shots from a variety of impossible angles. He rarely even hit the rim. It was a vintage Nowitzki performance and another example of the true value of a superstar in NBA basketball.

The fourth quarter rally wasn't Dallas' first run to make things interesting. The Mavericks closed the third quarter on a 10-0 run to tie the game at 75 entering the final period. Robinson hit a bunch of threes to give the Bulls' another double-digit lead, but it obviously wasn't enough.

The boxscore shows a mostly even game, just like the final score. Each team had 39 rebounds and 24 assists. Chicago shot 47 percent from the field but hit 12 threes while Dallas hit six threes and shot 50 percent overall.

Carlos Boozer also had a nice game for the Bulls, setting the tone in the first half by dominating Elton Brand in the paint. Boozer went into halftime with 18 points on 8-of-12 shooting and finished with 25 and 11 rebounds. Luol Deng also scored 25, connecting on four of his seven three-pointers.

This was not a good game for Jimmy Butler. The two missed free throws cost the Bulls a shot at overtime, but Butler was cold the entire day. He finished 1-for-8 for four points in 44 minutes.

Just as it seemed like the Bulls were getting it together in time for a playoff push, this happens. Fortunately the upcoming schedule is pretty easy, with games vs. Pistons, at the Wizards, at the Nets, vs. the Magic and at Detroit making up the next two weeks. This would have been a biiiiiig win. Oh well.

Since I like to end on a good note, even when life sux, here's a funny Bulls Show Photoshop that went up right before Dallas started their run: 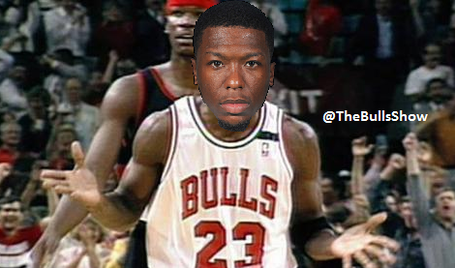