Jimmy Butler has seen major improvement in his three-point shooting since the All-Star break. Can it continue?

Heading into this season, there were a couple of things we knew Jimmy Butler could do well. We knew he could defend the hell out of multiple positions, and we knew he could get to the line at a solid rate. What was lagging far behind was his jump shot, which often times was flat as a pancake and made me cringe when it went up. There was a reason he attempted less than a three-pointer per game over the course of the first few months of the season.

Even when Butler got his chance to start earlier this year when Luol Deng went out with a hamstring injury, not much of his damage came from beyond the arc. There was improvement in other areas, but not in that three-point shot. If only Butler could develop a reliable three-pointer, we thought. Then maybe, just maybe, he could be that mythical two-guard that we have been so desperately searching for the past few seasons.

Well, ever since the All-Star break, we've seen some steady improvement in Butler's long range jumper. You know how some of us like to make fun of Stacey King for overusing the word "confidence" when it comes to certain guys? In the case of Butler and three-point shooting, King actually may be right.

Before the break, Butler shot 25.0 percent from three on 0.8 attempts per game. Since the break, Butler is shooting 45.2 percent on 1.7 attempts per game. And if we want to narrow that down to just March, it's 46.2 percent on 2.2 attempts per game. This of course includes his 2-of-4 effort in Wednesday's exhilarating win over the Heat, which featured a clutch three in the fourth quarter. Considering what happened at the beginning of the season, this certainly seems like a guy who is gaining a whole hell of a lot of confidence in his shot. Instead of hesitating to shoot the open three, he's taking them and hitting them at an excellent rate.

For a more visual look, here are shot charts from before and after the All-Star break: 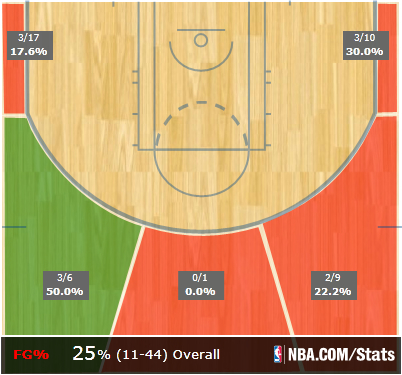 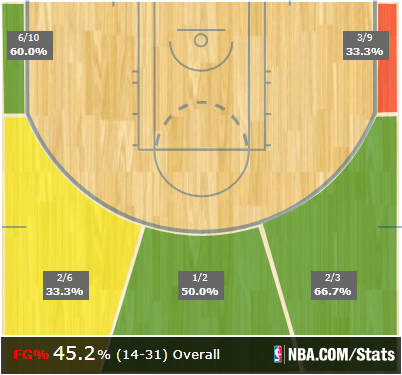 We all know how important that corner three is, and Butler has seen a marked improvement in that area, at least from the left side. He's doing better from above the break as well, but there aren't nearly as many attempts from there as the corner. That's certainly fine, because the corner three is one of the most efficient shots in basketball.

Of course, we always have to worry about this kind of hot stretch being an outlier. While expecting 45 percent three-point shooting is obviously too much, it would be nice to see Butler hit threes at a clip in the high 30s. But there's always the chance that he may regress back to his percentages from the beginning of the year. It's worth noting that he has been brutal on long twos since the break, shooting just 6-of-24 from 16-to-24 feet. So who knows if the good three-point shooting keeps up.

However, I will say that his three-point shot LOOKS a lot better, which I think bodes well for future success. And he really has been marvelous in general when forced into starting duty this year. I don't know if he can be the 2-guard of the future, but he has shown a lot of promise, has improved a ton and is a great guy to have match up against LeBron and Wade. If the Bulls aren't able to make an adequate upgrade at the 2 in the near future, I'm more than comfortable giving Jimmy a chance (he of course could start at the 3 if/when Deng is gone, but I'm not counting on that just yet).

All stats via NBA.com