The Heat are on a bit of a winning streak...

Share All sharing options for: Bulls vs. Heat game preview: Chicago braces for a Miami Heat-wave.

[Thanks to Bullieving in Miami (it's tradition for these games!) for today's game preview. There are still some openings left this month if you're interested. And if you're interested in going to the actual games, use our partners if you want Chicago Bulls Tickets. -yfbb]

Ladies and Gentlemen, the circus has arrived.

The 38-31 Bulls host the 56-14 Heat at the United Center tonight. At this point, the overall records are besides the point as both teams are a lock to get into the playoffs. What this particular matchup on this Wednesday night in March is all about is streaking. The Bulls come in having won consecutive games for only the second time since the calendar flipped to February. If they win tonight against the Heat, that's called a winning streak. It has happened before. Meanwhile, if you really want to know what an actual winning streak looks like and happen to be living under a rock for the last few months, just look at what the Heat are doing. Twenty-seven. Count them, twenty-seven wins in a row. The last time the Heat lost was before Groundhog Day. Makes me wonder why their last loss couldn't happen over and over and over. This streak also brings this thought to mind: there are a lot of crappy teams in the NBA. Oh, and a whole lot of good that lockout did for parity in that regard. But I digress. The focus here is this game and how these teams have gotten to this point.

The Heat have taken their play to a completely ridiculous level. Lebron James himself is shooting over 57% during the streak. The team overall is shooting just a shade under 51% during the 27-game streak. By comparison, no one on the Bulls is shooting over 49% for the season. In a league where most shots are missed and thus why rebounding is so important, the Heat are mitigating their disadvantage in that regard (23rd in the league in DReb%) by working their offense to find the most efficient shot possible and then actually converting them. Now, they have fallen behind in a few of these games and had to fight back from huge deficits (27 versus Cleveland just last week comes to mind), and thus their play in the 4th quarter has been spectacular to say the least. They have a Net Rating of 26.8 in the final period during their streak, and this stat came from their radio broadcast last night (sorry I don't have a source for it) but they've outscored opponents 149-79 in "crunch time" situations where the game is within 5 points and under 5 minutes remaining. When the Heat put their mind and effort into their defense, they're tough to beat and will be a handful come playoff time.

That last stat is more a testament to their defense. When the game gets to money time, the Heat step up defensively in a big way, allowing teams to shoot just 41% from the floor in the 4th (39% when on the road, so beware, Chicago) and just 29% from beyond the arc. I guess that last one is irrelevant to this particular game since the Bulls are barely shooting above that number from three FOR THE SEASON!!!

Now, you figure it's all Wade and/or Lebron spearheading this streak, but believe it or not, the Heat actually rely heavily on a traditional personnel grouping on the floor. 8 out of the Heat's 10 most heavily used lineups involve either Mario Chalmers or Norris Cole. This is allowing Lebron and Wade to play off the ball more and better position themselves to receive a pass as opposed to dribbling to that spot themselves. Also, Chalmers is being a great outlet when the ball does swing back his way. As opposed to last season where his 3pt% took a nosedive after the All-Star break, this year Chalmers's 3pt% has gone up every month, peaking at 44.7% in February, though his percentage this month has held steady at 43.7%. In fact, all of the Heat's shooters are currently red hot with Shane Battier, Ray Allen, Chalmers, and Cole all shooting over 40% from long range this month. So basically, if the Heat happen to miss a shot, make sure you grab the rebound! 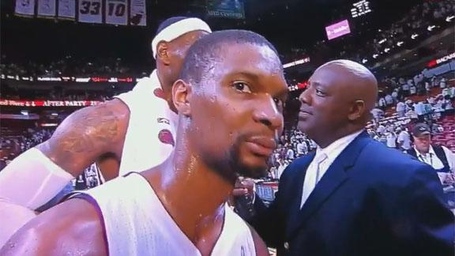 So how do the Bulls stop this juggernaut? Well, for one, pray. But really, in all seriousness, the Bulls must play disciplined basketball. You cannot turn the ball over against this team or this game will be over before it started. Sure, even their half-court offense is humming right now but the Heat like to get out in transition first and foremost so the Bulls must first take care of the ball. I suppose having Hinrich in the lineup will help some in that effort. He did miss the last game in Chicago where the Bulls turned it over 26 times so hopefully His Royal Grittiness will help mitigate some of that. Believe it or not, that last game between these two was a close contest (except for that little scoreboard thing). The Bulls won the rebounding battle, though not by as many as we would like (39-36). They held the Heat to 23% from three. That game was decided on turnovers and the Heat still managing 50% from the field versus the Bulls' 37% clip. So the Bulls need to execute their offense flawlessly, crash the boards, and go up strong in the paint if a scoring opportunity is there. The Bulls' interior passing was ineffective as the Heat came in seemingly prepared for it. Go up strong when Chris Anderson is not in the game as Bosh is not a particularly great shot blocker. Speaking of the Birdman, expect to see plenty of him tonight as he has steadily been gaining more minutes the more comfortable he gets with his new teammates.

As a side note: I might've mentioned it in my last preview, but ultimately, we are witnessing a historic run here and you've got to respect that. Bulls fans got to watch MJ dominate the league for a decade, but were we really thinking that kind of dominance was going to happen again right in Chicago? And though every opposing fan would've loved for their team to beat those Bulls on any given night, I don't recall a lot of booing but rather much respect shown to MJ and those Bulls when all was said and done. While I definitely expect a raucous crowd tonight, if the Heat end up winning, respect should be shown as this is a once-in-a-generation run we are seeing unfold before us. I'm not expecting cheering for the Heat like in some other cities (really, Atlanta? really??), but there comes a time when you've just got to tip your hat and let the bitterness subside. And quite honestly, I think I've noticed a bit of this around these parts recently now, which is good because as much as we all root for the Bulls, we all love basketball and this sort of excellence is indeed rare and should be appreciated.

Boy, was that a struggle to type...

Injury-wise, the Heat come in healthy as they expect Dwyane Wade back in the lineup tonight after he sat out the last two games resting his knee. The Bulls, meanwhile, are slowly nursing their way back to health. Hinrich and Taj are back now, and hopefully Joakim Noah finds his way back into the lineup after resting his foot over the weekend. Rip will probably still be playing shuffleboard at the retirement home, and there's no one else noticeably missing from the Bulls lineup, right? ;)

This game will air on the loathed four-letter network (ESPN) at 7pm CST. You can head over to Hot Hot Hoops to blog with the enemy.

All stats provided by NBA.com.