Share All sharing options for: Defining the Bulls' problems

The Chicago Bulls are in the midst of a free-fall, and there's no shortage of theories as to why. The injuries are both an obvious and accurate excuse, with Taj Gibson, Kirk Hinrich and Rip Hamilton missing significant time over the past month. The general wear-and-tear of the schedule has also taken its toll. Luol Deng is leading all players in minutes played for the second year in a row and his production has dipped significantly since February. Every Nick Friedell gamer includes an aside about the mental toll the drama surrounding the return of Derrick Rose has taken -- an excuse this community is likely to label as "bullshit" but one that might be gaining more traction as the situation continues to drag out. At a certain point, Rose's teammates -- who have been killing themselves to stay in contention all season -- probably deserve to know whether Rose is in or out.

The statistics show more tangible reasons for the slide, and Jared Dubin did a great job of compiling the numbers today at Hardwood Paroxysm. Dubin points out that the Bulls' rebounding percentage, opponent turnover percentage and opponent free throw rate have mostly remained constant all season, but the team is being dragged down by a suddenly leaky defense. Chicago's opponents have been killing the Bulls from the field since the start of February, seeing significant improvements from mid-range and corner shots, while also sporting a spike in the paint, outside of the circle.

Here's a graph from Dubin: 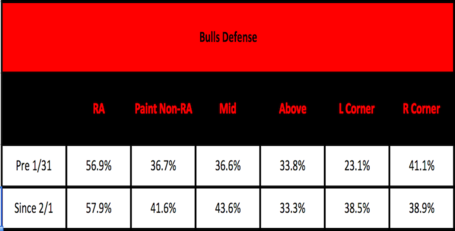 Nate Robinson and Marco Belinelli are the biggest culprits. Again, this can circle back to injuries to Hinrich and Hamilton, who are both decidedly unspectacular if not downright boring and annoying, but do seem to add some value whenever they're on the court. If nothing else, Hinrich and Hamilton give Thibodeau more NBA players to choose from and are able to cut-down on those times when Bad Nate shows up and Marco starts playing like he thinks he's Kobe.

The Nate-Marco pairing really is brutal defensively. From Dubin:

In the 386 minutes they’ve shared the court since February 1st, the Bulls have allowed 110.3 points per 100 possessions, a number that would rank below even Charlotte’s league-worst mark.

When Marco is on the floor, opponents see a five percent spike in the number of field goal attempts that are three-pointers. For a Bulls' defense that has always done a great job closing out on three-point shooters under Thibodeau, it's a very real problem. Opponent's three-point field goal percentage without Marco on the court is just over 31 percent; with him on the court, opponents are shooting over 35 percent from deep. Marco has certainly added offensive value to the Bulls and passes the eye test, but there's a reason the Bulls were able to secure his services for a one-year, $1.9 million contract. He has plenty of flaws as a player.

Gibson and Hinrich returned to the lineup in last night's loss to the Blazers, with Taj tallying 14 and nine and Kirk turning in the 'Kirk Special' by finishing 1-for-7 from the floor with two points and three assists. Hinrich was torched by Damian Lillard (24 points on 17 shots and seven assists) and Taj and co. couldn't slow down former Bulls great LaMarcus Aldridge (28 points).

Their return does give the Bulls some hope, I suppose, and the next month (with or likely without Rose) will go miles towards determining how formidable this group can actually be in the playoffs. The arrow is certainly trending downwards and has been for some time. You might want this season just to be over already -- I know I do -- but there's still 15 games left, two of them against Miami. These are your Bulls, warts and all.