The Bulls got the short end of the stick on several controversial offensive basket interference calls in the final minute of a loss to the Nuggets. Let's take a closer look at what happened.

The Bulls have been involved in several late game controversies this season, but nothing really touches what went down on Monday night against the Nuggets. Somehow, someway, an extremely short-handed and dead tired Bulls team was in position to end the Nuggets' 11-game winning streak, but a late Joakim Noah tip-in of a wild Marco Belinelli shot was waved off and ruled offensive basket interference. The Bulls wound up losing, 119-118.

Tom Thibodeau was absolutely livid following the call, and there was plenty of confusion as to what exactly happened. Neil and Stacey naturally blathered on about how horrible the call was, but upon further review, it seems that the call was correct.

There are several ways to look at this. First, according to Rule 11, Section 1-A, Sub-Section b in the NBA rule book, a player cannot:

Looking at a screenshot of the tap-in, it certainly appears that a part of the ball (and it only has to be a part), is above the imaginary cylinder: 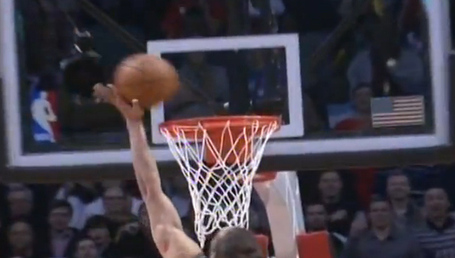 Now, Mark Deeks grabbed a screenshot from the frame before where Noah MAY be touching it when the ball MAY be outside the cylinder, although it's pretty tough to tell:

Here's the frame immediately before. Can you conclusively say he's touching that? If so, CONTROVERSY. twitter.com/MarkDeeksNBA/s…

However, even if you argue that Noah did touch the ball before it was in the cylinder, Rule 11, Section 1-A, Sub-Section g states that a player cannot:

Touch any live ball from within the playing area that is on its downward flight with an opportunity to touch the basket ring. This is considered to be a "field goal attempt" or trying for a goal.

Clearly, Belinelli's shot was on its downward flight and was going to hit the rim. Some may argue that many alley-oops are very similar to what happened in this play, which is something official Ken Mauer addressed in a postgame explanation of the call. Mauer basically said that there's no difference between the plays and that the call was made because they deemed that the ball was in its descent and had a chance to go in. That's certainly fair enough.

Where the real confusion reigns is when the offensive basket interference call was made and why it was allowed to go to review, when moments before Kosta Koufos clearly should have been called for exactly the same thing:

That play was not reviewed, because according to the NBA instant replay protocol, offensive interference/goaltending reviews can only happen if a violation was called. So again, since there was no violation called, there was no review.

Thibs and the Bulls' beef lies with the fact that they believe that Noah's tip-in was not called offensive basket interference on the court, and was only changed after the officials looked at the monitor. Based on the protocol that was followed with Koufos' basket, this kind of thing shouldn't have been allowed.

Watching the replay, it's hard to tell what exactly the officials did in this situation. My best guess is that the basket was initially ruled good, but after the Nuggets called a timeout, the call was switched. The refs then went to the review and confirmed the call. Neil and Stacey do mention an offensive basket interference call right as the officials begin to look at the monitor, so that would lead me to believe that the call wasn't necessarily switched after the review. And listening closer, it sounds like the PA guy announces goaltending before the review. But the Bulls certainly contend otherwise. Based on what Thibs and Noah said after the game, I would expect some fines to be coming their way.

This certainly was a crappy way to lose, even though it was almost a miracle the Bulls were in it to begin with. I'm sure the Bulls will file some sort of protest to the league, and I'm pretty interested to see what the exact response is.