There was a certain quality about Joakim Noah's dominant performance on Wednesday night against the Philadelphia 76ers that made me want to go back to the beginning. We could point to the graceful footwork he showed finishing inside the paint time and again, or the way he kept up his unbelievable level of play despite logging 45 minutes on an injured foot. Mostly, though, it was his absolute destruction of Philadelphia center Spencer Hawes that got me.

This is the middle of the lottery in the 2007 draft. This is when the Bulls would go a long way towards shaping their future, when they made a draft pick that has already led to plenty of victories and hopefully one day a championship. The Bulls needed a center and there were two. They had to decide between Noah and Hawes.

Hawes had a lot working for him back then, hard as it is to remember right now. He was the 'skilled' big man in the draft, the guy who could knock down a 15-footer with ease, someone who projected to be the next Brad Miller. For those pre-Rose Bulls teams always in need of scoring punch, particularly in the paint, Hawes was an appealing prospect. When juxtaposed against the much rawer Noah, it was easy to see why many people preferred the Washington big man over the decorated champion from Florida.

Cut to where we are today: Hawes is something of a running joke, while Noah is the key the Tom Thibodeau's entire enterprise. The Bulls couldn't do what the do without someone like Noah, a mobile big man who can attack the pick-and-roll ball carrier while still being light enough on his feet to recover if the ball is swung. There are only a handful of big men capable of carrying out such a responsibility. Noah does it better than anyone; Hawes couldn't do it in his wildest dreams.

Throw in Noah's ball-handling and passing acumen: who's the skilled big man now?

It's a combination of effort and athleticism that still makes Noah who he is, though. Noah swatted Hawes three times on Thursday, and each was distinctly impressive. 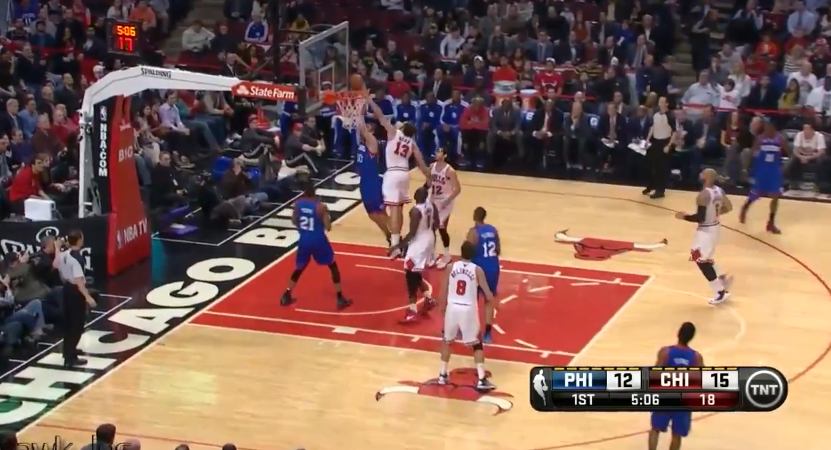 Evan Turner gets into the paint until he sees Noah standing there. Noah forces the pass to Hawes on the side and is still able to swat Hawes from behind without fouling. In that exact situation, two free throws for the opposing center is the most likely outcome. Noah just swats that shit out of the building. 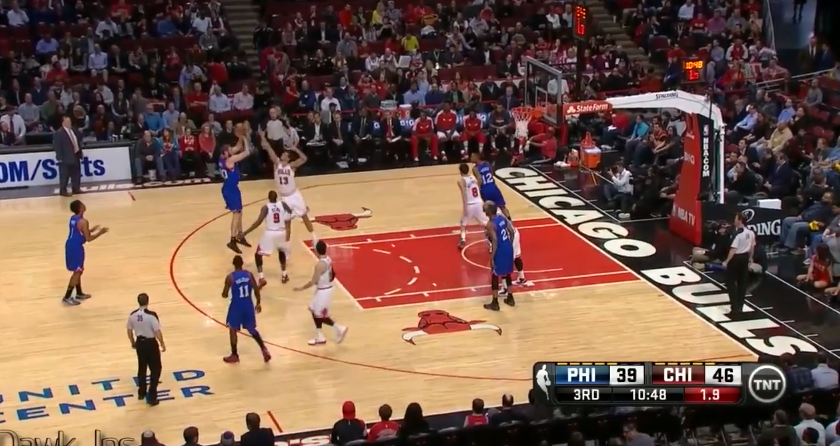 Blocking someone that far away from the rim is no joke. Noah knows enough to respect Hawes from 18-feet, and he's quick enough to challenge the shot when it becomes evident Hawes is going to pull up. Also: look at where the rest of the 76ers are standing. No one is in position to hurt the Bulls. This play never got off the ground in the first place, and Noah just flat-out erased it before even giving Philly a chance at an offensive board. 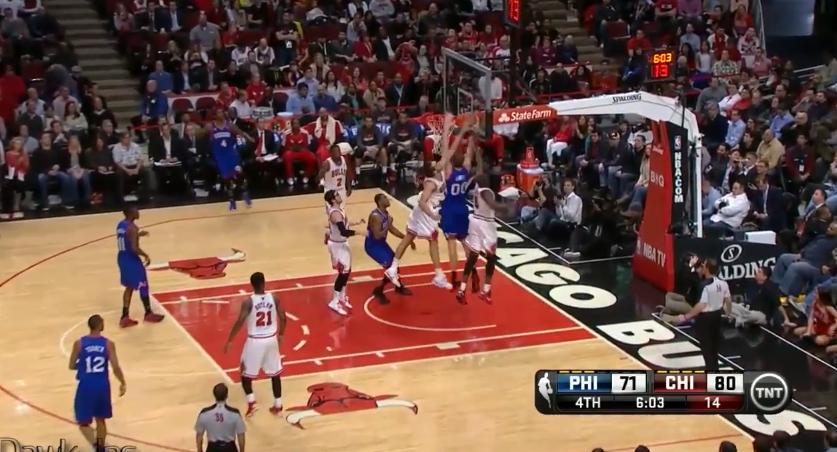 Again: Noah forces a driving Thaddeus Young to pass because of his defensive positioning. After the pass goes to Hawes, Noah is aware enough and athletic enough to get in position and block the shot. This is really impressive.

The final statline read 23 points on 8-of-12 shooting, 21 rebounds, 11 blocks and three steals. Probably the best game of Noah's career, and, as YFBB noted, maybe the highlight of the season.

We all know this year has been a bummer. It seemingly becomes more of a bummer with each passing week. But if you're locked into "championship or bust", sports will never satisfying. That's a miserable existence, especially if you're as invested as all of us are. Sometimes, the little things are enough, like owning the shit out of Spencer Hawes. There's been a lot left to be desired this season with the Bulls, but at least we get to cheer for Noah. It could be so much worse.