Share All sharing options for: NBA trade rumors: Bulls have assets for a Kevin Love deal

Jimmy Butler was not at his best on Monday vs. the Pacers, but it says something about the makeup of the second-year wing that even an off-night produces 10 points on eight shots and three steals. Butler also logged what would appear to be his first minutes this season at power forward against Indiana, joining the long list of Chicago defenders who were roundly destroyed by David West. It's obvious that the Bulls are going to be more likely to play Butler at shooting guard than power forward, but the added versatility to fill in in the front court when injuries start to mount is nothing but another feather in his cap.

There's a lot to like about Butler. His ascent in the wake of Luol Deng's injury was a big part of what made January the best month of the Bulls' season to date. His athleticism is a major boost to what Tom Thibodeau can do on the wing, not to mention the uptick it brings in overall watchability. Butler doesn't need the ball to have a major impact on the game, has been very impressive in guarding some of the league's elite perimeter scorers and is establishing himself as a downright terrifying threat on the glass.

The stats back all of this up. Butler is fourth on the team in PER (15.6). He has the third best on-court plus-minus (plus-two) and the third best net rating (plus 6.1) on the Bulls. His eFG% is tops on the team (51.2 percent), as is his true shooting percentage (58.3 percent, four points better than Nate Robinson, who's second on the team). Monday's game against the Pacers was the first time he finished with less than six rebounds since his playing time increase began on 1-19 against the Grizzlies.

Jimmy Butler is something, that much is for sure. The shooting guard of the future? The heir to Luol Deng's small forward throne? All of that talk is premature after only 10 games of significant production, but his development also means something else in the most surface level sense: the Bulls have another valuable asset.

In fact, when you team Butler with Spanish wunderkind Nikola Mirotic, the Bobcats' draft pick acquired in the Tyrus Thomas trade and maybe even Taj Gibson, the Bulls would appear to have enough to work with should they to decide to try to trade for a superstar.

Conventional NBA wisdom says that if the right opportunity presents itself, the Bulls should jump at it. There are a few examples of NBA champions that boasted only one superstar-level player: the 2011 Mavericks immediately come to mind, and you can draw parallels to the Spurs half-dynasty if you're ready to compare Deng and Joakim Noah favorably to Manu Ginobli and Tony Parker. Those are largely viewed as exceptions to the rule, more than anything. The SuperTeam era very much remains in full effect, with franchises rushing to pair stars together for one obvious reason: when play slows down and benches tighten in the playoffs, it still usually comes down to how many stars you have.

The Bulls have been in this position before, and they have always chose to play their hand ultra-conservatively. There was a time when Kirk Hinrich, Ben Gordon, Deng, Andres Nocioni and even Chris Duhon were considered valuable assets, and it's the reason the Bulls were a rumored destination for nearly every disgruntled superstar over the last decade. Kobe, Kevin Garnett, Pau Gasol, Amar'e Stoudemire, you name it. And all of that was before Chicago started clearing cap space for the summer of 2010 to give themselves a shot at LeBron, Dwyane Wade and Chris Bosh.

The key is capitalizing on the right opportunity. You don't want to include Butler -- who won't make any money for the next two seasons -- in a trade for Paul Pierce or Garnett. This may draw some debate, but even giving up Butler in a package for Gasol at this point would seem foolish. But there's one potentially in-play star on the trade market that might be worth an all-in assets push: Timberwolves power forward Kevin Love. 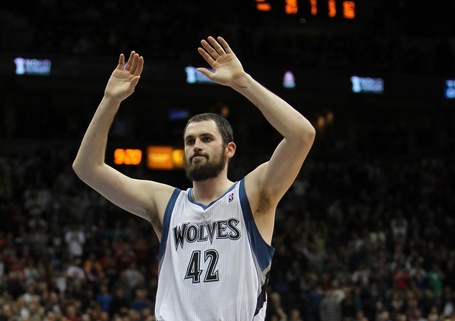 Love, by almost any measure, appears to be the perfect superstar to pair with Derrick Rose. He doesn't turn 25 years old until September, and put together a thoroughly badass campaign last season, finishing second in the league in rebounding (13.3 per game) while averaging 26 points. His shooting percentage wasn't great (under 45 percent from the field), but he shot 37 percent from three and hit nearly two three-pointers per game.

This season has been an all-around nightmare for Love. He broke his hand in the offseason doing pushups. He returned on Nov. 21, much quicker than anyone expected, only to again break his hand on Jan. 3 against Denver. He has played just 18 games this season and might not play another.

Most importantly, Love also has a very tenuous relationship with Timberwolves management. It started last season while negotiating a contract extension. Love was seeking a five-year deal that Minnesota GM David Kahn refused to give him. The entire scenario pissed off Love to no end before he would eventually sign a four-year, $62 million extension that allows him to opt out after the third season. Why the small market Timberwolves didn't want to lock in their homegrown superstar for as long as possible remains one of the biggest mysteries in recent NBA history, and it's clearly still on Love's mind.

In what was arguably the biggest #WOJBOMB of the season, Love gave some very candid quotes to Yahoo!'s Adrian Wojnarowski on his displeasure with Kahn and the Timberwolves organization in December. Love said he had his honesty and integrity called into question following his hand injury, and also ripped team management in about every way possible. Here are some choice quotes:

"I don't know who labels people stars, but even [T'wolves owner] Glen Taylor said: I don't think Kevin Love is a star, because he hasn't led us to the playoffs," Love told Yahoo! Sports. "I mean, it's not like I had much support out there.

"That's a tough pill to swallow."

"You walk into the locker room every year, and it's completely turned over," Love says. "There's new guys everywhere. And then it happens again and again. You start to wonder: Is there really a plan here? Is there really any kind of a … plan?"

Sounds like a man who is very likely to leave town, no? While it's possible the Bulls could find a way to sign Love when he becomes a free agent, I think being aggressive is the preferred route here. There will be a long list of suitors for Love, and Kobe is already pining for him after the Lakers' failed Dwight Howard experiment this season.

History says the Bulls will sit on their hands instead of being aggressive here. History also says that is likely to be the wrong move.

So: is Kevin Love worth cashing in your assets for? I'm not here to find exact trade scenarios because we're still a long way from anything coming to fruition (this would be an offseason deal, if anything), but after Gibson's extension kicks in next season it likely wouldn't be too difficult to match salaries.

How's this sound: Gibson, Butler, the Bobcats' pick and Mirotic for Kevin Love + whatever else to make it work.The hope is that the Bulls would be able to get it done without surrendering *all* of their assets, perhaps there's a way where Mirotic can remain. But more than likely, this falls under the old adage of 'you've got to pay to play'. A potential deal with the Bulls would net Minnesota a pretty solid return when compared with what Chris Paul, Howard and Carmelo Anthony were traded for.

So, let's do a poll. Forget matching the salaries for now, this is a question of organizational philosophy. Would you go all-in for Kevin Love?

Ricky O'Donnell is an NBA assignment editor at SB Nation. Email at richardpodonnell@gmail.com or follow on Twitter.