Luol Deng has had himself a rough few weeks

Bulls forward Luol Deng was selected to his second straight All-Star Game this season, but he has really struggled with his shot since returning from a hamstring injury on Jan. 28.

Share All sharing options for: Luol Deng has had himself a rough few weeks

During and after the vomit-inducing 71-69 loss to the Celtics on Wednesday night, it was pretty clear that the All-Star break couldn't come any sooner for the Bulls. Ravaged by injuries and facing a bit of an upswing in competition, the Bulls have floundered of late, losing four of five games heading into the break. And outside of perhaps Joakim Noah, there's one Bull who could REALLY use the breather: Luol Deng (Yes, I know he's not getting a true one).

Prior to the season, I criticized Deng's decision to not undergo surgery on his injured left wrist, as it just seemed reasonable to get it done considering the questions surrounding the return of Derrick Rose. Deng answered his critics early in the season, averaging 18.4 points on 46.4 percent shooting in the month of November. That may not have been exceptional and the three-point shooting was down, but a very solid start nonetheless.

Since that opening month, Deng has been a bit up and down. He had a rather meh December before rebounding for most of January. But then the hamstring injury struck, and since Lu returned after a few games on the bench, things have been really ugly. Let's take a look at his shooting numbers from both before the injury (occurred 1/18 vs. Celtics), and then after his return (came back 1/28 vs. Bobcats):

Pretty rough, right? The numbers are down pretty much across the board, and that three-point shooting is especially ugly. For a team that lacks three-point shooting like the Bulls, they really can't afford one of their supposedly better threats from long range to be shooting 20 percent from deep. Also notice that his free throw attempts per game are down, which would hint at less aggression on the offensive end.

To see if perhaps Deng has been less aggressive offensively, I wanted to take a look at his shot selection over both spans. We already know he's been taking more threes lately (while making less), but I was curious about the twos. So, SHOT CHARTS: 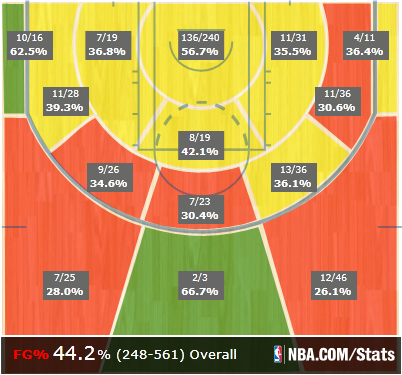 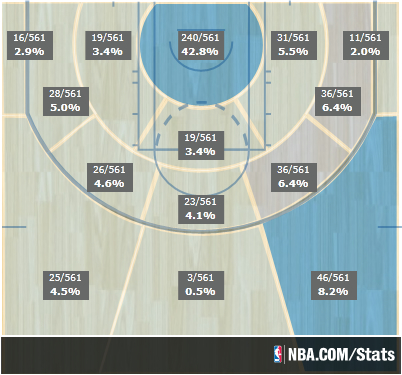 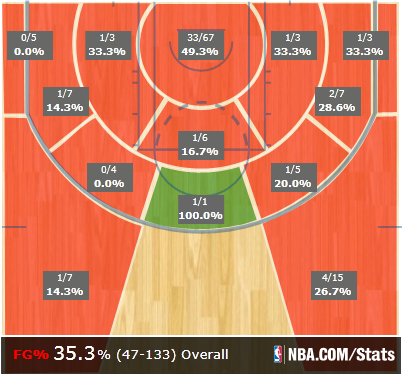 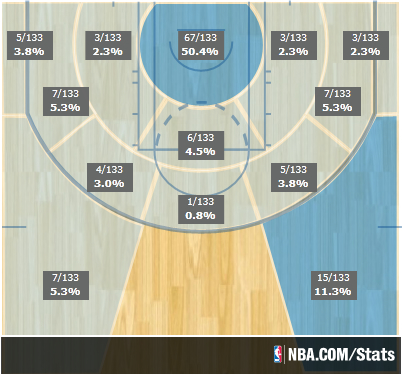 Looking at the distributions, Deng has actually taken a higher percentage of shots around the basket in the past few weeks (50.8 percent to 42.8 percent). When you expand it to the next three zones, it gets a little closer, but it still favors a higher percentage of shots closer to the bucket recently (59.5 percent to 54.1 percent). The difference of course, is that he's just making a much lower percentage these days. Just look at all that red on his performance chart from the past few weeks. Not good.

I went searching for other reasons for Deng's struggles, particularly whether the injury to Kirk Hinrich is affecting things. There could be something to it, as Deng has only had 57.4 percent of his field goals assisted since 1/28 as opposed to 70.2 percent of them beforehand. However, I also found that before missing time with the hamstring injury, Deng's overall shooting numbers were pretty close to identical whether Hinrich was on the floor or not. Lu's three-point shooting was markedly better with Hinrich on the floor (by about 5 percent), but not his overall percentage. Deng did shoot worse overall with Nate Robinson on the court prior to his injury, but there wasn't a significant difference.

Something else to consider is the Noah injury. Prior to Deng's injury, the man who assisted him more than anybody else was Noah with 44 dimes. That's more than Kirk (34) and more than Nate (31). But with Noah both missing time himself and not being as effective offensively since his own return from plantar fasciitis, Deng hasn't been able to take as much advantage of the big man's stellar passing.

I will give Deng credit for battling in other areas, as he continues to work his butt off on the defensive end as well as the glass. The results haven't exactly been there on defense (also a byproduct of the Noah injury), but he's been killing it on the offensive boards, pulling down 4.3 per game since returning from the injury. That certainly helps explain why he's been taking a higher percentage of shots near the rim lately.

Hopefully these shooting woes are just a bump in the road and Deng can get back to shooting a respectable percentage. I'm not expecting 50 percent shooting or anything, but it's not too much to expect 44-45 percent like earlier in the year, especially from a guy who has been named to two consecutive All-Star Teams. Deng's percentages would ideally even be higher than that, but I'm willing to cut him a little slack because he's being asked to do a little more than usual because of Rose's injury.

If the struggles continue, I'm sure there will be more questions about Deng's injuries. Obviously things started to turn downward after the hammy problem cropped up, so that would be an easy excuse to use. And I hate to bring up the wrist again, but it will always be in the back of my mind since it was never actually repaired. It would be nice to see Deng put to rest any doubts about his health with a strong "second half" of the season.

All stats courtesy of NBA.com