When combing through his early season struggles that have helped make the Bulls one ridiculously tough game-winning shot away from being 0-3, it's an idea I keep coming back to. Rose's issues -- and there have been plenty -- could easily be pinned on his 18-month absence from not just live NBA action but 5-on-5 games in general, but his dominant preseason performance set expectations too high from the jump.

Since Rose appears to be moving like his old self, he's expected to play like a rough facsimile of his old self. Through three games, it's clear this isn't the case. The Bulls just aren't losing with Rose, they're losing because of him. All of the small sample size theater caveats apply here, and honestly, I'm not worried about him moving forward whatsoever. Rose and the Bulls have given us plenty of reasons to believe they will figure it out over the last three seasons. But there's no sugarcoating Rose's awful performance right now, something highlighted both statistically and when watching the games.

Forget about getting back to the player who became the youngest MVP in NBA history. The Bulls just need Rose to be something less than the gigantic minus he's been on the floor for them thus far.

The numbers are not pretty. After finishing the preseason with a 34.97 PER per Real GM and posting nearly twice as many assists as turnovers, Rose has looked like a completely different player during the games that count. ESPN has him at a 1.76 PER right now. He's tied for second in the league in turnovers at 5.7 per game, a number that looks even worse when compared to the 4.3 assists he's averaging. Rose is shooting just 28.8 percent from the field and 26.7 percent on five three-point attempts per game. His 30.5 usage rate is fourth among players with significant minutes.

Rose's struggles in his first game back against Miami's ultra-aggressive trapping defense might not be that surprising, but what's happened since has been. Rose should have been able to roast the Raymond Felton's belly rolls on Thursday against the Knicks. He should have treated Sixers rookie Michael Carter-Williams on Saturday. Instead, Tyson Chandler's help defense and Carter-Williams' immense length stifled Rose into combining to shoot 11-for-37 with 12 turnovers.

Rose just doesn't seem to have his bearings straight yet. At his peak, part of what made Rose so deadly was his ability to bail out of drives by finding open teammates and delivering very difficult passes through tight spaces. Right now, he's playing like someone surrounded by a completely new supporting cast. He isn't looking to pass when starts a drive, he's looking to get bailed out with foul calls he's not getting. Through three games, Rose is averaging just 3.3 free throws per contest.

Drawing contact is a big part of what helped Rose make the leap from a very good player to an MVP-caliber one in 2011, but he's become too reliant on the officials to make a call. Rose needs to rediscover his midrange game to keep defenders honest. He attempted three floaters on Saturday vs. the Sixers by my count, making one of them. It'll come in time, but it's something both he and the Bulls should be cognizant of moving forward. While taking nearly every shot attempt either at the rim or from three-point range is a wonderful strategy for some players (read: James Harden), Rose simply isn't big enough or a skilled enough three-point shooter to be successful that way. His quickness makes the threat of the pull-up/floater his greatest weapon, and he's gotten away from it so far.

Abandoning the mid-range game and an inability to see the floor are Rose's most apparent issues right now. Both were on display in the loss to the 76ers on Saturday.

Rose's second miss on Saturday came when he jacked a three-pointer with 22 seconds left on a shotclock following an offensive rebound. Here's a screenshot:

It's just not a good look. Carter-Williams, who has at least a three-inch height advantage on Rose, is right there in position to contest. Rose could have attempted a jump pass to get the ball to Deng, if he was able to see him. If not, he at least could have passed back to Boozer and let the ball rotate around the perimeter. The 76ers' defense was scrambling here, and Rose bailed them out with a low-percentage look early in the shot clock.

His next miss might have been his most infuriating of the night:

Trying to draw contact at the rim is one thing, but doing it 16-feet away from the basket on the baseline against the opposing center is another matter. Hit Boozer on the cut. Try a step-back jumper. Really, this was the worst attempt possible in this situation.

Here's an example of Rose putting his head down to drive, looking for a call and not getting it: 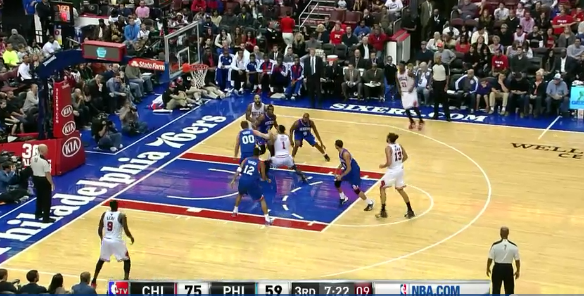 He could have bailed to find either Butler or Deng for a wide open look before he got too sucked into the paint. To be fair, there was a lot of contact here and there could have easily been a foul called, at which point he'd be lauding for not shying away from the contact. We've also seen Rose drain this exact look tons of times in the past, so we can expect for his finishing touch to come back eventually. When it doesn't work, though, the result is almost painful to watch.

It's not like Rose hasn't shown flashes. He's made some great passes. He's had some terrific finishes in the lane through contact. It's just that the bad is far outweighing the good right now. Even with Rose delivering a terrible game on Saturday, the Bulls only lost by three. As a team, they finished 3-for-14 from three-point range. Make even one more of those and this is a different story.

Rose isn't the only problem (Bulls: make a three, stop the other team from making threes!) but he's been the most visible one. It sucks to watch. It makes me scared to consider what might happen Wednesday against the undefeated Pacers. The hope is that Rose just doesn't bullrush Roy Hibbert and hope the referee calls a foul. There's a price for that contact, and the last thing Rose needs right now is another nagging injury.

It seems obvious to me that Rose is pressing, particularly following bad possessions. He needs to chill and run the offense. It's a process, as they say, and I have complete faith both Rose and the Bulls will come around eventually. There's too much talent and previous success here for that not to happen. But for at least the first three games, Rose's return has been an eyesore in just about every way imaginable.