Share All sharing options for: Bulls vs. Sixers: Chicago takes on the league's best team (huh?)

[Thanks to chapuforyou for today's game preview. It's a new season and that means new chances to sign up. -yfbb]

This year's motto for the Philadelphia 76ers is "Together We Build." Really, that's a euphemism for "Hang With Us, We're Going to Lose to Get Andrew Wiggins." The thought process is that in order to build an NBA franchise, you need a superstar player and next year's draft class is apparently stacked with them (I'm just taking everyone's word on this—I'm not a good prognosticator for superior basketball talent, except, of course, Noce). But the problem with tanking is that losing is necessary in order to secure the best possible chance of a No. 1 overall pick, and the Sixers are doing the one horrible thing that you're not supposed to do when executing a proper tank job: they're winning. In their opener, they ran over the defending champs, who, sure, were playing a back-to-back after picking apart the Bulls and certainly looked lethargic (were also without Wade), but still it's the Miami Heat against a team with seven guys no one's heard of (plus Kwame Brown). And, then, last night the Sixers had the temerity to beat the equally hapless Washington Wizards on the road.

So, basically the Sixers are re-creating the plot of Major League*. For those unfamiliar, that film portrays a dastardly owner's attempt to move a franchise away from Cleveland (because it's Cleveland, and Cleveland sucks). In order to re-locate her team, she compiles a roster of shitty players, hoping the roster of shitty players lose a lot and the city won't care about her moving the team (because SHE HAS FEELINGS and cares what Cleveland thinks). BUT, as in turns out, (BECAUSE IT'S A MOVIE) her team starts winning and her players were actually better than she thought. The team makes it to a one-game playoff against co-division champs the Chicago White Sox (yay!), which the Indians win (boo!) and make the playoffs. The film leaves out whether they go on to win (or even make) the World Series**. 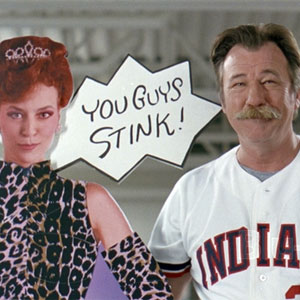 Which brings up a hilarious question: how ironic would it be if the tanking Sixers won enough games to receive the Eastern Conference's dreaded eighth seed (or even seventh, but I won't go too crazy here), and the opportunity to be slaughtered in the first round? It would be a huge accomplishment for sure, but definitely wreck their plans to reignite the franchise with an elite player.

So, I suggest the unthinkable: The Bulls should lay down tonight. Rest Noah, Boozer, Deng and start MIKE JAMES (!!!), and if that doesn't work then just commit, like, 100 delay of game penalties. Seriously, like, there's no way we lose more than 25 games this year. If we really want to infuriate the Sixers and their fanbase, we lose every game we play against them. Even if it means forfeiting the No. 1 seed, I say, fuck it; it's worth it to see those miserable people have a miserably mediocre franchise. I realize this is a plan Thibs would never buy into (because TENACITY), though it definitely seems the meanest strategy possible.

Anyway, I should actually provide some analysis, right? And talk about some specific Sixers?

I'll start with the huge surprise thus far: Michael Carter-Williams (PG) scorched the Heat Wednesday night and instantaneously emerged as the Rookie of the Year frontrunner after putting up an insane stat line: 22 pts, 12 asts, 7 rbs, 9 (!) stls. He was getting a lot of open looks and the Heat were playing a crazy slopfest. So, the Bulls simply need to rotate effectively on defense and be careful with the ball in order to stop MCW. The Sixers start somebody named James Anderson at shooting guard. I do not know anything about him***.

Thaddeus Young (PF) and Evan Turner (SF) are this squad's "stars," and so far they've been playing that way. Both putting up lots of points (because there's literally no one else). Spencer Hawes (C) currently has a PER of 28.0, which is ridiculous because he's as good in the paint as Cleveland is at being a beautiful city. He has been banging up against Udonis Haslem and Marcin Gortat, which explains that stat. He'll have a harder time against Noah and Nazr tonight.

It's worth noting that Derrick Rose tore his ACL against the Sixers forever ago, and this is his first game against them since. Let's see some hero ball!

*Although, the fictional Cleveland Indians did suck at the start of the season, only to come together later through locker room chemistry and the ability to put on prescription glasses.

**Baseball is stupid, and teams care way to much about simply making the playoffs.

***If you know anything about any of these "unknown" bench players, please educate me in the comment section.