This is the official BlogABull preview, a part of the SB Nation NBA preview series, as well as another year of the long-running Celticsblog-ran NBA Blog Previews.

What Significant Moves were made during the off-season? 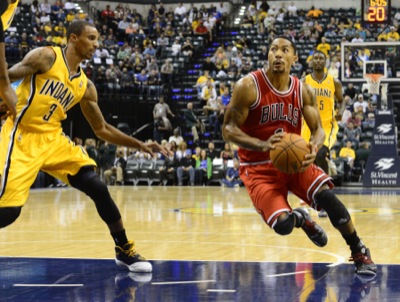 FLANNERY: #TheReturn, for real
O'DONNELL: The rise of Jimmy
PRADA: Noah's a one-man zone
PATT: Title hopes are back

The Bulls really only made a single signing, using their taxpayer MLE on Dunleavy. It was an important step in improving the team's outside shooting, which has been poor during much of the Rose era and last year carried by stopgaps like Nate Robinson and Marco Belinelli. Dunleavy (both draftees are also shooters, though they will begin the year outside of the rotation) should not only benefit from open shots (a career-high 42% from three last year) but also be a solid all-around player to complement Rose without showing the drawbacks of being a 'specialist'.

Another obvious answer for important move is simply getting Derrick Rose back after he missed the entire prior season. Having a healthy Rose makes everyone else's job easier, and puts the Bulls into title contention.

What are the team's biggest strengths?

The Bulls under Tom Thibodeau have always been among the league leaders in team defense, as Thibs's system and implementation of it makes solid units out of nearly any lineup. But his main rotation, especially in the 4th quarter (when Taj Gibson often replaces Carlos Boozer) has the capability to be especially hellish for opponents. Rose's D has improved greatly as he can impose his physical advantages on the ballhandler, Luol Deng and Jimmy Butler may be the best wing defending tandem in the league, and Joakim Noah (along with Gibson) is tremendous in the way they can simultaneously protect the rim and switch out on the perimeter.

Part of that defense is also how well they rebound, again from all positions on the floor. Offensively it helps erase some mistakes as well as they can overpower teams on glass from that end.

More: All of SB Nation's NBA previews to date

What are the team's biggest weaknesses?

The Bulls did have a great offense in Rose's last (semi) healthy year, but for the most part they have struggled to score at the same proficiency at which their defense have shown to lock opponents down. Their outside shooting is somewhat suspect: Rose hasn't become a 3-point threat, Butler emerged as one but the sample size can still make it a question, and Deng had a truly poor shooting year in an up-and-down (from that standpoint) career.

There also is a need for some playmaking pressure to be taken off Rose. Not only in situations late in games when he's trapped, but also as a way to help ease the burden over the course of an extremely long season. Rose will always rightfully be a high-usage player, but the offensive responsibilities may be on him a bit too much with nobody else on the roster that capable of generating their own looks. Carlos Boozer was meant to take that role but his individual post-game has waned as he's aged.

What are the goals for this team?

After the setback and circus that the Derrick Rose injury had the Bulls in the past season, this coming year may be their best chance to win a title for a while. The core group of players have been together since they lost to the Heat in the 2011 Conference Finals, with Jimmy Butler’s emergence and Noah’s ascension possibly making the team better than ever.

After (surprisingly, to me) using their taxpayer-MLE on Dunleavy, the Chicago is poised to be over the luxury tax for the second consecutive season. If the Bulls don't make it out the East again (and maybe even if they do) there could be major changes. Deng is poised to walk in Free Agency, and Boozer is headed for amnesty. The front-office and coaching staff is reportedly a 'toxic' situation that may get worse if they don't win big. The Bulls have solid organizational assets and flexibility moving forward (their favorite thing!), but it'll take some work to merely stay at that 2010-14 level.

Can they stay healthy?

To make that best shot happen, the team has to be healthy in the playoffs.  Injury questions surround both Rose and Joakim Noah. Deng has forgone correctable surgery on his wrist sprain and was nicked up in other places last season. Boozer's actually been durable the past two seasons but has a well-known history of missing games. There are frontcourt depth issues (Nazr Mohammed being the only backup center) only exacerbated by Thibodeau’s style of play. Not only has Thibodeau received criticism for playing his stalwarts like Deng and Noah an excessive amount of minutes, but the two-way roles they are asked to excel in during that time makes it an even more glaring issue: both guys were shown to be amongst the league leaders in distance ran over the course of games.  Of course, the flip side to Thibs's unrelenting style is that it's what arms the Bulls with a very good defense, a disciplined offense (their team passing is another major strength), a superstar option, and the capability of winning it all.

In the wake of past injury issues they've pledged up and down the organization to better manage the season as the marathon it is, and hopefully that will pay dividends in the spring. Because the Bulls may have their flaws, but no current contender doesn't. Chicago believes when their team is together, they can beat any of them.