After an excellent preseason, Rose struggled mightily against an aggressive Heat defense. Not the biggest surprise after an 18-month layoff, but disappointing nonetheless.

The first possession of Derrick Rose's much-anticipated return against the Heat, Rose saw something he had to know was coming. But perhaps he needed Admiral Ackbar to warn him, because Rose failed his first test against the Heat trap, turning the ball over and watching Udonis Haslem soar in for an easy dunk:

The turnover would be a harbinger of things to come, as Rose struggled all night against the swarming Heat defense, finishing with just 12 points on 4-of-15 shooting and a disappointing 1-of-7 from three-point range. Rose had more turnovers (five) than assists (four) and attempted just four free throws, a far cry from his parade to the line in the preseason. Although to be fair to Rose, there were a few times he got the short end of the whistle.

Some struggles shouldn't have been a surprise for Rose, although his impressive preseason raised our collective expectations for him on opening night. But as we should know, there's a difference between facing preseason defense and a 100 percent locked-in Heat defense, and it certainly showed.

The Heat traps, which have given the Bulls plenty of trouble in the past, force quick decisions and penalize tentativeness. Joakim Noah noted in the Chicago Tribune how the Heat did an excellent job forcing the ball out of Rose's hands, and too often, there was just nothing going on when it happened:

"They did a good job of trapping Derrick, getting the ball out of his hands," Noah said. "But if they put two on the ball like that, we have to make them pay. It's on all of us."

There's certainly plenty of blame to go around for the offensive woes. Rose's own decision-making was rather suspect, with several questionable three-point attempts and some slow reactions in general to the traps. When Rose had some success beating the double-teams, he made quick decisions either making the right pass (often to Noah in the high post) or aggressively attacking the trap off the dribble (see: his first basket):

But this didn't happen enough, and many times when it did, the Bulls didn't take advantage of their...advantage. Noah botched a few opportunities close to the basket, while Taj Gibson missed a dunk off a nice pass from Rose in the pick-and-roll. Tony Snell and Luol Deng also bricked a few wide open threes, with Snell's sequence in the second quarter being rather forgettable.

I also noticed some really poor spacing, especially when things were going south in the first half. On several occasions, there were players in the same spot clogging up the middle of the floor and not giving Rose proper room to operate.

Something else interesting to note about Rose's offensive performance was his shot distribution. While Rose was great in the preseason, he clearly lacked the polish on the mid-range game that makes him such a dangerous player when he's right. Last night, he took just one shot outside of the paint that wasn't a three-pointer: 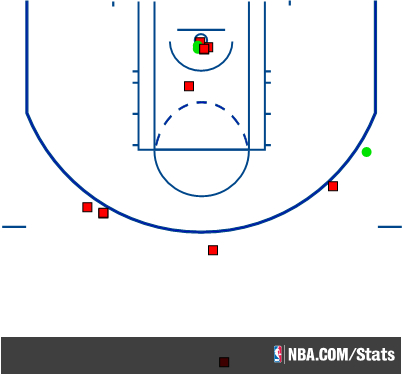 Doug Thonus at Bulls Confidential lamented the lack of Rose's mid-range game, going as far as saying that he has "morphed into Eric Gordon." I'm not going to make that kind of declaration, but Rose needs that floater and pull-up jumper in his arsenal to become as dangerous as he can be.

Rose didn't only show rust on the offensive end, because he had his issues on defense as well. He had problems getting around screens several times, leading to easy buckets for Miami. There were also a few not-so-pretty displays of one-on-one defense that saw Rose get roasted by Chalmers and Cole.

Despite what happened, there's really no reason to worry about Rose's lackluster performance. As Steve Kerr said on the broadcast, the Heat were possibly the worst team he could face coming back after an 18-month lay-off due to their length, athleticism and attacking style.

Perhaps the most important thing was that Rose looked and felt fine health wise, although he did have a rather ugly sequence late where he got blocked at the rim twice and lost a jump ball to Dwyane Wade. Fatigue certainly may have played a factor there, and it will take Rose a bit of time to get all the way back conditioning wise.

In any case, this is just one game of a long season. Much better days lie ahead for Rose and the Bulls, and I expect a bounce-back performance Thursday against the Knicks.