Bulls vs. Heat: How did Miami get so many open threes?

The Bulls' second unit is usually known for its defense, but that wasn't the case in the season opener against Miami.

Share All sharing options for: Bulls vs. Heat: How did Miami get so many open threes?

The term 'glue guy' can almost seem like a backhanded compliment at times, a resignation that a certain player isn't expected to shine for a team so much as keep them from falling apart. It's been a label stuck to Luol Deng for some time in Chicago, and it's one he wears well. Deng was miscast as the Bulls' leading man during the pre-Rose era even if he was the team's best two-way player. Under Thibodeau, Deng has become essential to the Bulls for doing everything but carrying the scoring load.

If there was ever a case for the importance of a glue guy, it was presented during the season opener against the Heat.

Deng picked up three fouls in the last eight minutes of the first quarter, the last of which on a charging call with under :10 seconds remaining. With the Bulls trailing only 17-15, coach Tom Thibodeau thought he couldn't risk Deng not being around for the type of dog fight at the end of the game the Bulls and Heat always seem to produce. So, Thibodeau sat Deng for the entire second quarter, and that's when Miami blew the game open.

The Heat went on a 17-0 run in the second and ended the quarter with a 37-18 advantage. A two-point game at the start of the second was now a 21-point deficient facing the Bulls going into halftime.

Now you see why Thibs never takes out Luol Deng.

It wasn't LeBron James or Dwyane Wade beating the Bulls in the second, either. It was mostly Miami's role players. The Heat went 5-for-5 from three-point range during that period, getting some very uncharacteristic open looks from the Bulls' second unit.

It wasn't long ago that a Bulls bench headlined by Taj Gibson and Omer Asik was potentially the best defensive lineup in the NBA. That was far from the case on Tuesday, and it cost the Bulls the game.

The Bulls' bench was really bad. On the surface level, they were out-scored by Miami 42-26 on the night. The plus-minus figures show the disparity: every Chicago starter outside of Derrick Rose either finished in the green or was no worse than -4, but the bench got lit up. Kirk Hinrich was -19, Taj Gibson was -13, Mike Dunleavy and Tony Snell were each -10.

The bench didn't have a good shooting night, but it was their defensive lapses that really cost the Bulls. Here are a few examples of how Miami got so many open looks on Tuesday.

Miami's second three-pointer of the night came in semi-transition at the end of the first with LeBron pushing the ball up the court. The Bulls' defense is just completely scrambled here, with Gibson and Dunleavy confused as to who guards Shane Battier and who guards Ray Allen. Both plays run at Battier leaving Deng as the lone defender to account for both James and Allen, who is positioned in his traditional spot in the corner.

You can see Boozer and Deng shouting for someone to get out on Allen as James dribbles up. When LeBron passes off to Allen, there's no one covering him and he knocks down the open look. This one is on either Dunleavy or Gibson. Given the lineups on the floor, Allen was likely Dunleavy's responsibility, but Gibson also had plenty of time to recognize Dunleavy as already on Battier and rotate over.

This one is definitely on Gibson. Battier made a pass at the top of the key and then drifted around the perimeter. Gibson, who was guarding him, sunk low after the pass and eventually got screen by Chris Andersen. With some quick ball rotation, Battier was standing wide open for three.

This is when things started getting out of hand, and you can blame Hinrch for some awful defense that led to this three from Norris Cole. With Ray Allen driving on the weakside, Hinrich darted towards the paint to double Andersen. He didn't need to do this. It left Cole wide open for three, which is where Allen found him, spotted up and unguarded. 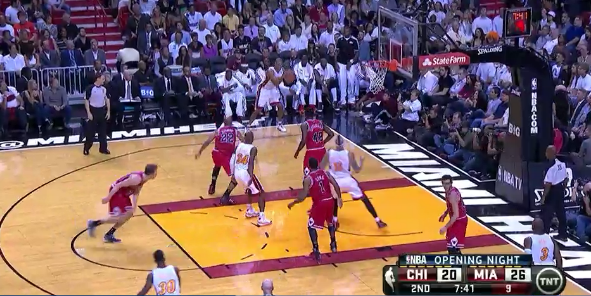 Here's another one you can blame on Gibson. After Battier positions himself in the corner, the ball goes to Allen on the wing. Even though Nazr Mohammed is in position to stop the Allen drive, Gibson cheats over. It leaves Battier with a wide open look, which he knocks down. 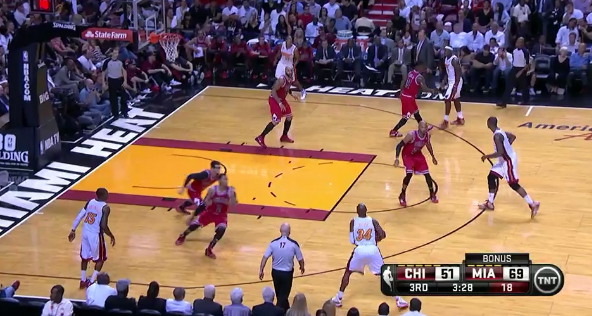 Here's another example of terrible defense by Hinrich. In semi-transition, Rose and Hinrich each make a run at Allen on the wing. Hinrich should have just stayed glued to Mario Chalmers. Allen rotates the ball and Chalmers is wide open for three.

One more example of bad defense from the bench. Not to glorify a Stacey King phrase, but knowing your personnel is pivotal. Here, Dunleavy doesn't. He gives Allen way too much room on the outside, and Allen's ultra quick release contributes to an easy three for one of the best shooters in league history.

The Bulls' bench will get better defensively, but the loss in the season opener was a direct byproduct of their struggles after Deng got into foul trouble. If you takeaway the second quarter, the Bulls would have won 77-70.

Deng very rarely finds himself in early game foul trouble like this; it's even more uncharacteristic for Thibodeau to sit his favorite workhorse for the entire second quarter. There's plenty of things that went wrong in the Bulls' opening night loss, but bench defense was chief among them.