Wednesday night's game was an extremely impressive performance from the Bulls. They jumped ahead early on the Pistons and had a 20-point lead for much of the second half. The biggest encouragement came from Derrick Rose, who not only had an extremely productive night but did so on some spectacular moves:

You see several occasions there where there is tremendous (a.k.a. Rose in the NBA-like) stress on the knee. That doesn't even include a few FT-earning possessions where he showed both similar explosion and ability to fight through contact.

Seemingly he's all good after that display, and that's all awesome.

What else looked fantastic was the defense. Granted, the Pistons have a new frontcourt to integrate, were missing several people in their backcourt (note Rose taking down Will Bynum and Peyton Siva), and are coached by Maurice Cheeks. But whether their opponents really wanted to be there or not, the Bulls really did a great job of forcing the Pistons outside. 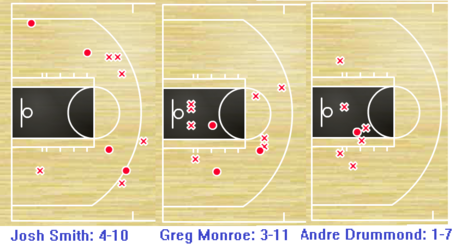 There were lots of great performances on both ends. It was obviously good to see Noah look fine, even though he didn't make a basket. And look: Tony Snell hit some shots. In a general sense they showed some overpowering physicality on a very big frontcourt, both in rebounding and simply going after loose balls. This team just looks like one that's going to be very difficult to overcome in a game. Especially for a non-elite teams...of which there are plenty.