Share All sharing options for: Bulls vs. Cavs: Kirk Hinrich on Kyrie Irving, Taj Gibson's inside scoring, and announcer talk

Some more good stuff on the Bulls dismantling of the Cavs...

I made the crack (and Jay mentioned it in the preview) about Kirk Hinrich's work against Kyrie Irving. Though you'd think Irving would be the type of ultra-quick guard that Kirk would have trouble with most, our annoying-faced stupid-head does do a fine job making Irving uncomfortable.

Looking at the matchups in their careers, it isn't exactly significant. The physicality of Kirk's work shows through in the fouls, but that obviously comes at a cost. For what it's worth (EVERYTHING), Hinrich's teams are 4-0 in these games.

If you want to see a more effective presentation of data, I submit Taj Gibson's shot chart: 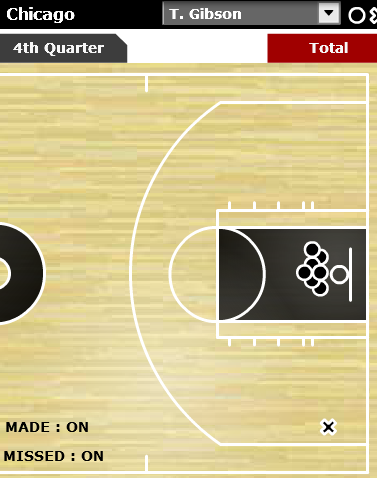 Taj's one miss in 9 attempts was when he dared not look directly up at the rim. Gibson wasn't just scoring on put-backs or other garbage attempts either. He made decisive, crisp and effective post moves against undersized opposition when he knew he had the advantage. That's great to see, though we'd like to believe (and Thibs's offense will continue to try) the jump shot will come along as well.

Boozer and Deng has similarly nice looking shot locations, as the Bulls mauled the Cavs inside without Varejao. At one point Stacey King said Deng was posting 'like Raisin Bran'. Which isn't TOO awful a line. I don't think.

Speaking of, I'm developing a new strategy to actually enjoy watching Bulls games in spite of the home announcing crew. Switching to radio works obviously only when I'm watching live. I think muting-outright is a step too far, but what I'm looking to do is hitting mute right after the Bulls hit a shot. This avoids the following 'analysis':

King: awwwww [catchphrase 1-4]!, I tell you Neil, [player] is [turning it around / becoming an all-star / going to win 3 NBA finals games for the Bulls this year]

Neil: and what about [misidentified opposing player] with the [disparaging remark about said player]. The [player+team] just looks [unfocused / lazy / ready to quit] !

And while I'm mentioning the extracurriculars, I saw that the halftime show last night was the guy (Christopher?) doing the one-man Village People act. Going to a game a few years ago and seeing that for the first time was an in-arena highlight for me.