Coming off their win over the Magic on Wednesday night, the Chicago Bulls head south to balmy Miami (in January!!) to face the defending champion Miami Heat in their first meeting of the season. The Heats are coming off two consecutive overtime victories against the Magic and Mavs and have currently won 8 out of 10, with the two losses in that span coming against the Pistons and Bucks. So there is evidence of the Heat playing down to the competition. The question is how far "down" do they play against the Bulls.

Not to take anything away from the Bulls teams of the past two years, but a part of me wonders how much the Heat really "get up" for this matchup. The Bulls have won 5 out of the last 7 matchups in this series and yet it's the Heat who have made it to the NBA Finals these past two seasons including advancing past the Bulls themselves in 2011. I mean, is Lebron really hurting from this? I think it's safe to say Lebron has the trump card in that battle. So it's kind of difficult to gauge how pumped the Heat are to face their little ol' conference rivals. And without the only MVP of the last four years not named Lebron James missing from the matchup, you have to wonder what the Heat really think about their foe for the evening.

So, how can the Bulls walk out of Miami with a win tonight? Well, for one, they must limit Miami to one shot per possession. The Heat come in as the most efficient shooting team in the league with a .492 FG% (1st in NBA), .398 from three (2nd), and .547 in eFG% (1st). With that kind of shooting, the Bulls can't allow extra possessions. Thus, the Bulls need to take advantage of the fact Miami does not rebound well on the offensive end at all, ranking next to last in that department (21.3 ORB%). And it's fairly easy to see why. The Heat have serious height issues. There is not one legit 7-footer on the roster. They started the season with Chris Bosh at center, Lebron at PF, and Shane Battier at SF, and I think eventually it's the lineup they will run out there during another inevitable run at a championship in the playoffs. Heck, it's what they did last year and worked out pretty well. In the meantime, Lebron is back at his more traditional position of SF while Udonis Haslem has been starting at PF. Still, no one has ever confused Bosh for a banger on the inside and he even gets out-rebounded by Lebron himself. Haslem can grind in there but lacks the size and literally cannot hang on to a single pass thrown his way these days.

The other factor where the Heat are very susceptible is outside shooting. Being that the Heat lack some size and being a fundamental part of their defensive scheme, the Heat defense collapses often in the lane. They focus on closing off lanes of penetration that it leaves them open to 3-pt attempts on kick outs. Now, other teams, like the Knicks for example, have been able to take advantage of this and put up stellar shooting performances against them. Sadly, the Bulls lack consistent outside shooters. I mean, I know we have Craptain Kirk and all, but even his prowess can't compensate for the lack of... well... Korvers on this roster. Luol Deng, for one, is shooting his worst % from three in 6 years. Beli is holding steady at 40% from downtown, but we've all seen how his production takes a dive once coming off the bench. So it'll be up to those guys to get hot tonight and make the Heat pay for concentrating on defending the paint so well.

As much as people wanted to make a big fuss about Ray Allen joining the Heat, this roster lacks serious athleticism outside of the Big 3. It's a deep roster for sure, full of floor spacers who stand around waiting for a Lebron or Wade kick out. Outside of that, though, they lack anyone who can take the pressure off Lebron to make a play on their own. The one advantage having Ray Allen does give (besides hitting countless late-game three-pointers so far this season) is the ability for Coach Spoelstra to sit Lebron and Wade together at times since he can still roll with a lineup of Ray Allen, Chris Bosh, and whoever. That still ain't too shabby. Having quality players up and down your roster... what a novel idea. Ultimately, the Bulls need to run those stand-still shooters off the three-point line and force them to put the ball on the floor. Don't sit on the pumpfake. Instead, with a team who shoots as lights out as the Heat do this season, run out there on the kick out and jump into that shooters face with no hesitation.

I do have to say this is a good opportunity for Bulls fans to get an up-close look at Lebron this season. Other teams' fans watched MJ kill it for us for years that it's only fair that now we Bulls fans are the ones watching, but it truly is a sight. Lebron has taken his game to another level. He no longer settles for jumpers the way he used to and has actually refined that aspect of his game greatly. Lebron is shooting .414 from 3, by far the best mark of his career. Along with his ability to play and create out of the high-post, Lebron has taken his efficiency to new heights. I keep bringing up the comparison to Karl Malone. To me, that is who Lebron reminds me of in build and playing style with the exception of course that Lebron is faster, more athletic, and more agile. But these days, Lebron's offense initiates from similar spots on the floor and some of his post moves are very reminiscent of The Mailman. As much as getting snubbed by him in 2010 brought out the bitterness in us Bulls fans and as much as we like to "pretend" we wouldn't want him on our team, Lebron has finally risen his game to undisputed best player on the planet levels. And don't get your hopes up about his potential opt-out in 2014. Yes, he will opt-out. I think he does it strictly to assure himself a max contract, and a part of me wonders where that roster, and more specifically Wade's health, are at that point. Still, this is an organization run by swindler Pat Riley, who I'm sure makes a more profound impression on free agents than our bungling trio of GarPaxDorf. Still, in what other city can Lebron bike to the arena at this time of year like he does right now in Miami. (and no, I will not accept any bribes to mistakingly hit him on purpose with my car.) 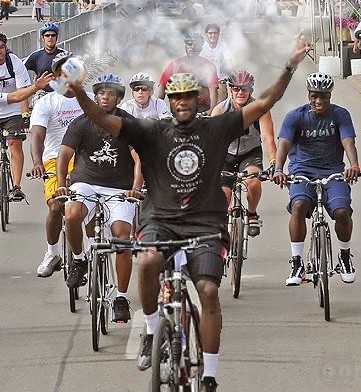 I'm expecting a close game because, well, that's just how these teams play each other, but I doubt Boozer for one follows up his performance in Orlando in the same fashion. In all honesty, I hope Thibs matches Boozer up on Bosh. Bosh's main function in the Miami offense is as a bail out option if the clock is winding down. He has a good knack for finding an open spot in the mid-range area for Lebron or Wade to kick out to. His presence is really what swung the momentum in their favor against Boston in the ECF last year. Before he returned from injury, the C's were dominating that series in part because Garnett could roam freely on D. As soon as he came back, all of a sudden Garnett had to stick to Bosh and it opened up lanes for the Heat. I say keep Booz on Bosh where he can almost be hidden on D, box out Bosh, and keep Noah closer to the basket for rebounds. The Bulls must win the rebounding battle to have any chance in this game. Still, I fear Mario Chalmers abusing Hinrich tonight and the Bulls serious lack of playmakers to put pressure on the Heat defense. The Bulls just have to match their crispness with the ball that they demonstrated in Orlando, move it around the perimeter and find the open shooter. And when that shot goes up, Noah, Boozer, and Taj need to box out and be Johnny on the spot and grab boards. Make Miami pay for their lack of size.

I may or may not be enjoying this one in person but rest assured Bulls fans always make their presence felt in Miami. I'm pretty sure Bulls fans will outnumber Heat fans throughout the first half until everyone running on Cuban time finally arrives. This is not a slur, it's just what we call it down here.

Enjoy the game and Let's Go Bulls!!!!! Gametime is at 7pm CST on the evil, four-lettered network, ESPN.

Blog with the enemy at Hot Hot Hoops. (I actually miss their old blog name, for all its ridiculousness.)