The Bulls ended the month at 12-4 and are only 2.5 games behind the Heat for the No. 1 seed in the Eastern Conference.

Share All sharing options for: Chicago Bulls Notebook: January was a good month

The Chicago Bulls are rolling, but you already knew that. They've won four of the their last five games and eight of their last 10. After finally being able to hold onto a big lead against the Bucks on Wednesday night, the Bulls end January at 12-4, now 28-17 overall -- first in the division and third in the East. They are but 2.5 games behind the top-seeded Miami Heat, totally within striking distance of grabbing the No. 1 overall seed in the conference for the third straight season. This is completely insane.

Tom Thibodeau's reign as Bulls coach has been all about overcoming seemingly impossible obstacles and suspending disbelief, so maybe Chicago's suddenly gaudy record shouldn't surprise us so much. The Bulls did in January what they have always done under Thibodeau -- defended, rebounded, used depth to their advantage, ect. But something about this past month felt different. This was, I think, the first time all season the Bulls have been fun.

This is without question the most bizarre development of the season. The Bulls have been undeniably competent all season long, but watching the games still often felt like a chore. Not anymore. In January, the Bulls very nearly became fun.

Think of all the cool stuff that happened this month: Luol Deng and Joakim Noah were named to the All-Star team, Jimmy Butler established himself as a very legitimate NBA player and Nate Robinson and Steve Novak got in the league's most pathetic feud since DeShawn Stevenson and Soulja Boy started beefing with LeBron. Carlos Boozer even killed a guy. All of this while Derrick Rose continues to make strides and should be set to return sometime in February.

There were some great games, too. Beating the Heat in Miami is a neat way to start any month, and the Bulls' 96-89 victory on January 4 was one of the season's best. It's easy to forget because they've been shitty so for long, but beating up the Knicks still feels good, too. The Bulls did that this month as well, building a big lead and just barely hanging on for a 108-101 victory on Jan. 11 to improve to 3-0 against New York this season. Destroying the Lakers isn't so much notable as it is enjoyable these days, but the 95-83 win at the United Center was still a great time. Kobe Stopper!

There were a lot of close games too, and the Bulls won them all save for that weird trip to Memphis when Vlad Rad and Nazr inexplicably saw playing time at the end of the game in place of a suddenly benched Noah. But besides for that? Good times only. Remember Deng's overtime game-winner against the Raptors? What about Marco's fading/falling/leaning bucket to give the Bulls an overtime win in Boston the following game? And then there was, of course, this:

And it's only getting better. Rose will be here soon, and you can bet his return will generate more hype than this city has seen as a sports town in a very long time. Looking at the schedule, that Feb. 21 home game against the Heat sure seems like a tempting time for him to return. More likely, Thibodeau will make Rose a game-time decision for a week and a half before suddenly bringing him back on the road. Lame but smart, probably.

Here's some other stuff that happened this month:

JIMMY BUTLER IS NOT IMPRESSED (via @bulls_realGM)

As Matt and Jay both noted, this one begs for a "Game, Blouses" caption. 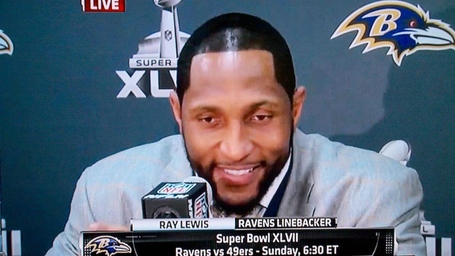 Which was followed by:

From The Examiner, via Jon Greenberg:

"So many to count," Curry said smiling at the mere mention of Robinson. "I just remember the first plane ride. He joined the team last year, I think after the first week. We were in LA, so he met the team on the road. D Lee had kind of warned us about his energy and his personality. On the first plane ride back to LA, it was like he had been on the team for 10 years and he knew everybody personally. He was joking around, running up and down the aisle of the plane, tickling people, ragging on people and he had been with us for less than 24 hours. You can just see that’s who he is. He’s a fun guy, always like to keep it light. That’s something that regardless if you play well or not, he’s not going to change, so you like that about him.

Nate got jacked up

Seems like a fitting way to end. January was a very dope month, here's hoping February is just as good.