Share All sharing options for: Bulls vs. Grizzlies game preview: Deng likely out, defense will reign

Hey gang. The Chicago Bulls take on the Memphis Grizzlies at the United Center on NBA TV this evening (8pm eastern time). I am actually a big fan of the Grizzlies team so this preview will emphasize my non-hater side.

Backstory: The last time these two teams met BaB was turned into a psycho-sexual pit of despair. The Bulls were held to 71 points, out rebounded 51-39, pissed on, shat on and then devoured by a 50 ton penis worm (hence the psycho-sexual part). I have an artists rendering but you need a black-light to do it justice.

Hinrich came back from injury early to 'rescue' the team but his play was so abysmal that it warranted its own post. Just to make clear how dire the general mood was at the time, here is a choice quotation from obnoxious american:

hinrich is a fucking disgrace. there were plenty of examples, but the one that sticks out to me was at the end of the first half, there was 10 seconds left and he walked the ball up slowly like he didn’t give a fuck, then dribbled into a double team for a turnover. Fuck hinrich and fuck this organization for saddling this team with this useless prick.

Ah, how far we have come. Boozer has somehow become twice the player he was, Joakim is playing at an all-star level, Luol Deng is a credit to humanity (but we already knew that), Hinrich is limited but respectable, DRose will soon return and the Bulls are 4th in the Eastern Conference. We just beat the hated Boston Celtics on a miracle shot by Belli. Life is good!

On the other side, things are not so rosy in Memphis. The Griz were blown out 3 games in a row, losing by more than 20 each time before downing the Kings last night (here is a nice panic-post on Straight Outta Vancouver that any sports fan can sympathize with). The Griz would probably like a quality win against a quality team to get them back on track but hopefully they are not as hungry now that they have beaten the Kings.

Let us not forget to mention the Boozisance, wherein Carlos Boozer is becoming a double-double machine and passing the eye test in every conceivable manner. That said, I am anxious to see him at work against a tough front-court (and Memphis has, arguably, the toughest). Even a modest game from Boozer would be great and if he lights them up, so much the better.

ZBo and Deng are questionable. On to the matchups!

Hinrich vs. Conley: Conley may soon be joining Rondo and Paul George in the land of over-underrating. That said, he is quite good and really tore into us last time. His 17-4 statline on 50% shooting doesn't really do his performance justice (although there is much despair that may have influenced this perception). Hinrich is a demigod of grit, shining beacon in the face of despair, fulfiller of dreams of a stronger, tougher human race and the only part of the buffalo that the Indians couldn't use.

Hamilton/Belli vs. Allen: Expect Rip to get into it with Allen. Allen is his usual defensive self putting up 8 ppg but carving out a membership on the all bang-for-your-buck team. Rip played damn well against the Celtics and hopefully he keeps it alive.

Jimmy Butler vs. Rudy Gay: Jimmy scored 6 of the Bulls 12 points in the OT period while he was filling in for an injured Lu. His statement on the subject: "It was really fun being out there with my guys. It's crazy they have me out there. They had faith in me. Whenever I scored a basket they kept yelling, 'Keep going Jimmy!'" Isn't that great? Gay is the subject of near constant trade speculation. I think that he is a good player on a bad contract but I cannot see how the Griz can improve their team by moving him. They could use a player with a better deep ball to give their bigs room to move, but no roster is perfect.

Marreese Speights vs. Carlos Boozer: Speights looks a hell of a lot like Mike Tyson. From what I recall about his game, he is more of a face-to-the-basket, mid-range type player. The type of guy who Boozer used to be before he remembered that he was a damn good basketball player. Please let this last. 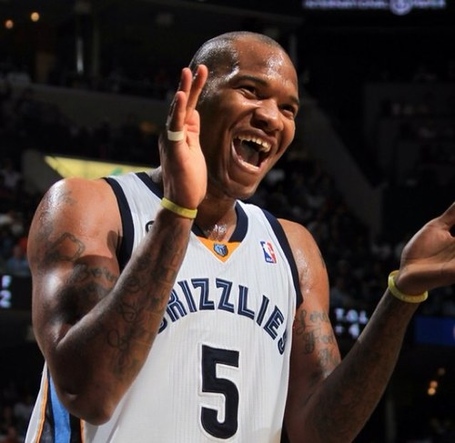 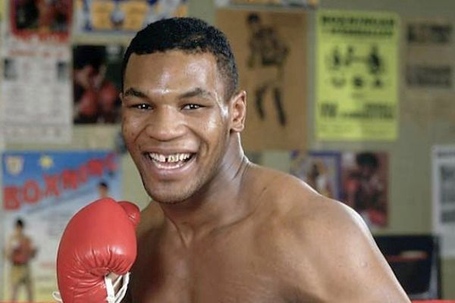 Joakim Noah vs. Marc Gasol: I love Marc Gasol. He is crafty, strong, a great passer and he meshes well with ZBo. I love Jo. This is going to be a great matchup to watch and is a possible all-star game preview.

Keys to the game:

Rebound you idiots! As I said, the Bulls were out rebounded 51-39 the last time these teams met. The Bulls need to crash the glass with abandon. This is a proxy battle for a larger war between the front-courts. The Bulls need to go in their and have their way with these Grizzlies.

Slow down Conley: Hinrich's saving grace is that he can fight over screens and deal with opposing PGs. This definitely did not happen last game and this is his chance to redeem himself.

Put the ball in the basket: This is usually taken for granted but, we really do need someone to make the orange ball pass through the rim. With Lu gone, we take a step back with respect to shooting. Someone needs to step up, be they Jimmy or Belli.

Prediction: This will be a low-scoring slugfest with the Bulls prevailing because Thibs will have them well-prepared. Conley will not make us look foolish again. We will out-rebound the Griz. Jimmy Butler will have double-digit scoring. We will defend our home court and come out with the win.

Check out the game on NBA TV at 8ET. Check out our brothers in arms at Straight Outta Vancouver. Let's have another one of these boys: 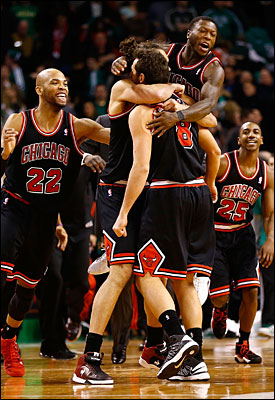