Kyrylo Fesenko signing: A little background on the newest Bull

Share All sharing options for: Kyrylo Fesenko signing: A little background on the newest Bull

Yes, it's true that Bulls camp invite Kyrylo Fesenko can't officially sign a real contract with the team until late November unless Nate Robinson is waived or some sort of salary dumping trade is made. But at this point, I think it's pretty safe to assume that as long as Fesenko isn't a complete disaster in camp, he'll be signing with the Bulls at that time. Because let's face it, if there was other legitimate interest out there, he'd probably be all over that and not settling for a non-guaranteed deal.

So assuming this, let's take a gander at Fesenko's career and see just why nobody is willing to offer a 25-year-old 7-footer a guaranteed contract.

Fesenko was selected by the Philadelphia 76ers with the 38th pick in the 2007 Draft (for reference, Omer Asik was drafted 36th in 2008), but apparently the Utah Jazz were enamored with him enough to trade up from pick No. 55. One can find a pretty glowing scouting report on DraftExpress, a report which called him a "true draft sleeper." There was plenty of raving about his physical tools and while reading through much of it, I couldn't help but think of Asik. For example:

For the most part, his production comes in the form of dunks. He moves pretty well off the ball, looking for low-post looks, trying to fill spaces and rolling after setting picks.

As for the defensive end, he wasn't quite as highly touted as Asik, with one reason being his propensity to NOT avoid contact:

Defensively, he's again an active guy, but the kind of player who looks first for the block rather than to stop the rival with his body. That's particularly obvious in defensive rotations. Although for the most part, he recognizes when and where to help a teammate, he doesn't seem very willing to take charges to force offensive fouls, and goes directly for the block if he has the opportunity. In many other situations, he's a player that never avoids contact, but he just doesn't seem keen on being rolled over by a rival. Anyway, he enjoys solid lateral quickness, he intimidates thanks to his length and provides a nice effort.

Still, even with the fouling issues and the lack of a developed offensive game, this was a guy who had a bit of promise. So what the heck happened?

Remember that NBA Cult Classics post about Viktor Khryapa? Well, Fesenko was SLC Dunk's choice for that (h/t to BaB commenter THEKILLERWHALE for dropping this in the comments of the original story in this stream). Basically, Jazz fans wanted to love the guy because he's a lovable goof, as seen in this video made by Moni, the "resident media guru" of SLC Dunk:

The problem, of course, was that Fesenko just wasn't very good in Utah. He played only 1090 minutes in 132 regular season games over four seasons with the Jazz, doing little but bricking free throws and compiling an enormous foul rate. He had his moments here and there, but for the most part, there just wasn't much going on. Interestingly enough, he got some "extended" playing time in the 2010 Playoffs due to injuries to Jazz starters. The results were quite awful (via Basketball Reference): 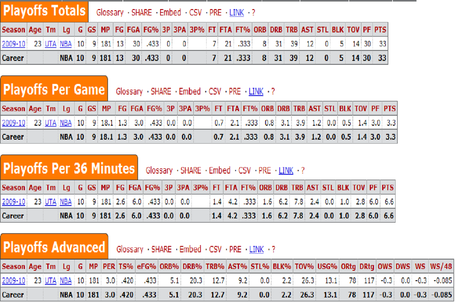 After that postseason debacle and a horrific 2010-11, Fesenko found himself on the free agent scrap heap. He remained unsigned until the end of March 2012, when the Pacers inked him to a deal for the rest of the season. He only played three games with Indiana, but he did put up a 29.3 PER! Hooray for small sample sizes!

Now, while this seems like a nothing signing based on Fesenko's rather poor track record, I do actually kind of like it. He's still only 25 years old, and he's a legit 7-footer with some athleticism. I really don't know if Nazr Mohammed has anything left in the tank, and if he truly is toast, perhaps Fesenko could step in and play some competent spot minutes. The guy is obviously no Asik, but under the tutelage of Tom Thibodeau, I think he could possibly become a poor man's Asik. And I'm sure some people at the United Center won't even be able to tell the difference.