Whether or not the Bulls match the Rockets' three-year, $24 million offer sheet to keep Omer Asik, they don't have the funds available to be aggressive in the free agent market.

Every free agent target is being told by their agents that the players can get more than they actually can; and to, therefore, not settle for mid-level exception type of money until the teams with cap room to spend more begin draining that cap space.

Jason Terry, Jason Kidd, Jamal Crawford, and Brandon Roy are the only free agents to have committed to MLE-range money at this point. All went to teams with something in common: their positional needs at the players' respective positions are less demanding of those free agents' performances than the Bulls' need.

Kidd and Terry already have a ring each and would be closer to role players on the Knicks and Celtics than they would here in Chicago. Crawford and Roy went to lesser full teams, but to teams in the Clippers and Timberwolves with more flexibility to add to their respective rosters, though already would be periphery focal points of the teams' schemes.

That said, the Bulls Organization still deserves to be scrutinized for not being able to land a Terry or Crawford type of talent with so much still left in their tanks.

To look at the Bulls' options, it's still required to look at the free agent market in a larger picture. The max contracts define the market's cap, those losing on their attempts to get max deals lowers the demands of those attempting to get more than the MLE; and from there, the Bulls have realistic targets.

I placed all of the guards in one chart and bigs who can legitimately play the five in another; the third is a current recap of the deals agreed to, some offered to this point in general, and how some players landed on waivers. 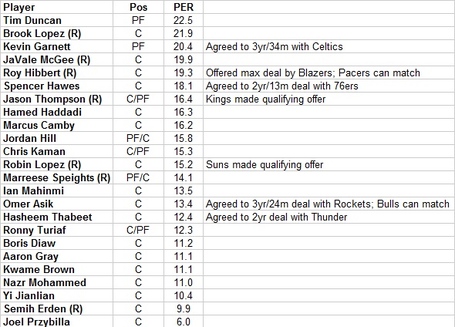 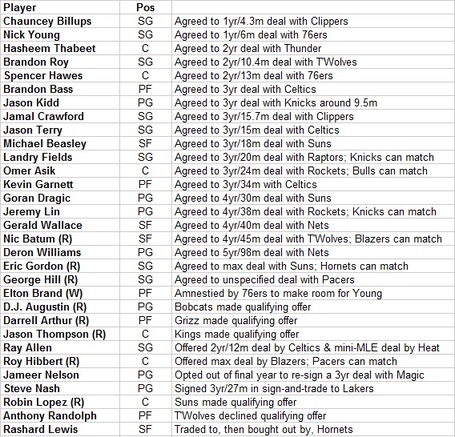 The deals are much shorter due to the newest collective bargaining agreements. Those which are most influential to lowering the market prices for the Bulls to maximize of their targets are obviously Terry and Crawford, but moreso the surprisingly reasonable deals to Goran Dragic and Jeremy Lin.

Dragic and Lin are precisely the types of players most likely to get overpaid early in the free agent period, and thereby inflating the prices of others. Not saying that a player like O.J. Mayo would fall to MLE-value, but their deals lessen the likelihood of him getting into the eight-figure dollar range. A perfect example is Nick Young only getting a one-year deal worth $6 million from the 76ers.

This may push guys like Jerryd Bayless and J.R. Smith down to even the mini-MLE range for two or three years and keep current Bulls targets like Courtney Lee, Delonte West, and Kirk Hinrich in their price range, if not lower them to veteran minimum range.

More importantly, if the Bulls opt to not match Asik's signed offer sheet with the Rockets, there are serviceable bigs on which to use their MLE with players like West, Lee, or maybe a Shannon Brown in the veteran minimum range.

These are stretches, and the market still has a lot of playing itself out to do. But what we know is who's out there and who's agreed to what right now. Most of the rest is guessing.

Most free agent notes are via the NBA.com Free Agent Tracker and Adrian Wojnarski's Twitter page; PER is via Basketball-Reference.com.