2012-13 NBA Schedule: Bulls to open at home against Kings, will face Rockets on Christmas

Share All sharing options for: 2012-13 NBA Schedule: Bulls to open at home against Kings, will face Rockets on Christmas

The past few months have been rough on Bulls fans, but there still is basketball to be played next season. And while the Bulls likely won't be a championship team next year, seeing the new schedule is still somewhat exciting. The NBA has officially released that 2012-13 schedule, with three games kicking off the slate on October 30. Opening night features Wizards at Cavaliers, Celtics at Heat and Mavericks at Lakers.

As for the Bulls, they open the season on Halloween night against the Kings at the United Center. In fact, six of the first seven games of the year will be at the UC, including dates against the Hornets (The Brow!), the Magic (everybody boo Dwight), the Thunder, the Wolves and the Celtics. So that's pretty fun, but obviously not as fun as they would be if Derrick Rose was playing.

The Bulls will then go on their first of two five-game road trips (no long Circus Trip!), heading out west for four games and then finishing up the trip in Milwaukee. One of those games on the trip will be in Houston against former Bull Omer Asik.

The Bulls will also see Asik on Christmas Day, as the Rockets will be coming to town for a 7 p.m. start on the holiday. That's a rather interesting choice for a Christmas game with no Rose, but I'll take Bulls basketball on that day in any form.

Some other notes on the Bulls' schedule:

It's always tough to predict a team's record, but it's especially difficult this season with so many questions surrounding the Bulls. When does Rose return and how effective will he be? Will Deng have surgery? How will the new bench come together? With Thibs at the helm and some core players still in place, the Bulls should still win plenty of games barring more major injuries. It will likely be ugly, but there will be wins. If I had to guess, I'd say somewhere between 45-50. 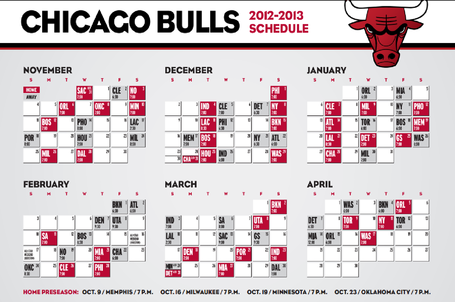 And for a full NBA National TV schedule, click here.