Jerry Reinsdorf, the luxury tax and the '2014 plan'

Share All sharing options for: Jerry Reinsdorf, the luxury tax and the '2014 plan'

The luxury tax. For as long as its been in existence (since 2002-03), its been the bane of Jerry Reinsdorf's existence. He's said on multiple occasions that he would be willing to pay the tax for a "winner" (whatever that actually means), but to this point, those words have rung hollow.

The Bulls, of course, have never paid the luxury tax, despite playing in the league's third largest market and being one of the most profitable teams in the NBA over the past several decades. And according to Forbes (h/t to SB Nation Chicago's Ricky O'Donnell), they have been THE most profitable franchise in the NBA over the past five years, raking in an average of $55 million per season.

For a team bringing in those types of dollars, there's really no excuse not to be doing whatever you can to build a championship team. If that means chopping off a bit of that profit in order to pay the luxury tax, then suck it up and do it. And while spending freely and wildly isn't always the answer (just ask the New York Knicks), a competent management team should be able to spend those extra dollars wisely.

Unfortunately, to this point, the Bulls have never done that (they're in line to pay the tax next season, but more on that later). This makes them just one of seven teams to have never paid the tax in its history. Salary cap guru Mark Deeks of ShamSports.com has painstakingly gone through all the data and put together a handy little spreadsheet to show just how much tax each franchise has paid throughout the years: 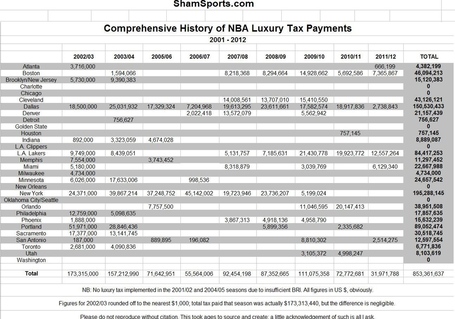 Along with Chicago, we have Charlotte, Golden State, the Clippers, New Orleans, Oklahoma City/Seattle and Washington as the only other franchises that have never paid the tax. Several of those other teams should not be that surprising. Charlotte and New Orleans are two teams that probably could be contracted. Basketball in Seattle obviously floundered and the only reason the Thunder haven't paid the tax yet is because all of their young studs are just now getting their extensions. The Clippers have been a laughingstock for a long time and have probably the worst owner in the league. Golden State and Washington are a tad more interesting, because as Yahoo! Sports' Kelly Dwyer notes, the Warriors have been profitable despite being mostly bad and the Wizards have handed out some pretty monster deals in the past.

But again, there's really no excuse for the Bulls. They've fielded good to great teams in recent years, have brought in huge profits and still haven't paid the tax. All the while, Reinsdorf allows his other team, the Chicago White Sox, to spend pretty much however they please, despite consistently poor attendance numbers. As O'Donnell points out, the White Sox traded for $17 million per year Jake Peavy in 2010, while Peavy was still on the disabled list. Like O'Donnell, I find it hard to believe the Bulls would ever do something like that.

And this brings me to the tweet that was deleted from the official White Sox Twitter account a couple of days ago. I know it's been discussed some on this site already, but I figured I would make it more widely visible (again, h/t to O'Donnell):

Is the Bulls account going to RT this? RT @whitesox:"Basketball is a game. Baseball is a religion. Baseball is American." - Jerry Reinsdorf

If you need any explanation for the difference in approach regarding the Bulls and White Sox, you have it right here. If Reinsdorf truly said this and feels this way (he of course tried to backtrack somewhat), Bulls fans have every right to be enraged. It seems apparent that Reinsdorf's heart belongs to the White Sox, and if that's the case, he should sell his majority stake of the Bulls. Get somebody in here that will go that extra mile and spend a few extra million to put a better product out on the floor each and every season. The Bulls are a big market team with big market profits, and they should be run accordingly. But since Jerry is making bank off the Bulls, we know that won't happen.

This stuff stings extra hard right now because of the way this Bulls offseason has gone. The team has waved goodbye to nearly the entire Bench Mob, and has replaced them with guys that are cheaper (outside of Kirk Hinrich, who for some reason they overpaid, at least in my opinion) and arguably worse. I'm sure Tom Thibodeau will be able to squeeze out solid play from some of these new guys, but I'm not convinced the new bench will be as effective as the Bench Mob.

The whole approach of the offseason has left me scratching my head. From not buying into the second round on draft night, to letting go of the Bench Mob for essentially nothing, and then everything else in between, I'm none too pleased with how things have played out. I know that this upcoming season is a wash due to Derrick Rose's injury. I get that. But that doesn't mean GarPax shouldn't have been doing everything they could to improve the team, even if it didn't put them "over the top." The goal every offseason should be to improve the talent on the roster while maintaining as much flexibility as possible, and the Bulls didn't do that. Meanwhile, much of the competition has.

The Hinrich signing to me epitomizes the entire problem. Considering how quickly the two sides came to an agreement once free agency started, it was apparent that he was one of the Bulls' top free agent priorities. And I find that laughable. I have nothing against Kurt personally, but who makes a 31-year-old with recent injury problems their top priority? I would have been fine grabbing him at a cheaper price much later in the free agency process. Obviously the Bulls weren't. Younger (and better) guard options like Jerryd Bayless, Delonte West, O.J. Mayo and Courtney Lee to name a few were all available at relatively cheap prices, but the Bulls just had to have Hinrich. And they ended up paying nearly $8 million over two years for him rather than the $6 million that was first reported. So in that regard, I guess you can argue they actually weren't being cheap. Too bad they were just being dumb.

I'm sure the Bulls will make a big deal about how they're in line to pay the luxury tax for the first time ever next season. Of course, the tax isn't assessed until the end of the year, so a midseason deal could potentially get them back under the threshold. Also, while they're set to pay the tax, they "brilliantly" hard-capped themselves at $74.3 million thanks to their offseason maneuverings, something that could likely have been avoided. So if for some reason Dwight Howard changed his mind about Chicago, or if some other big trade option came along, it could be difficult for the Bulls to pull off because they will likely start the season pretty close to that hard cap.

All these moves have done is re-enforced the notion expressed by several Chicago journalists that the Bulls are operating with this magical "2014 plan" in mind, where the Bulls "tread water" for the next two seasons before making a big splash in the 2014 offseason. As most know by now, this plan involves the combination of Luol Deng's and Carlos Boozer's salaries coming off the books, plus Nikola Mirotic coming over from Spain. Theoretically, the Bulls will have a ton of cap space to work with in order to lure another star to Chicago (when has that ever worked?).

I've always thought this "plan" was ludicrous, because who simply wastes a year of Derrick Rose, who should be at or near 100% by the 2013-14 season. There should be a "2013 plan" in place, and maybe there is, but that's not what's being peddled to us right now.

Two esteemed members of the Bulls blogosphere, the aforementioned O'Donnell and also Doug Thonus, have attacked the "2014 plan" ferociously the past few days. In two separate posts, O'Donnell first went after the general approach in itself, and then followed that up by examining the likely free agent candidates in 2014. Many of the best guys like LeBron James, Dwyane Wade, Carmelo Anthony, Chris Bosh have ETO's (so does Amar'e Stoudemire, but whatever), and it's unlikely any of them will be going anywhere.

Then there's Kobe Bryant, Dirk Nowitzki, Paul Pierce, Pau Gasol and Zach Randolph, all guys who would have made sense a few years ago, but not in 2014, because they'll be old as hell. Rudy Gay would be an intriguing option, but he has a massive player option that I'm assuming he'd exercise. Once you get past those guys, the next best options are Danny Granger and...Luol Deng. How about that?

O'Donnell also mentions the possibility of some members of the 2010 draft class, such as Evan Turner and Paul George. But are the Bulls treading water for that? There would be mass outrage if the Bulls tried to sell this plan and then ended up throwing a ton of money at either of those guys, unless they made HUGE strides the next few seasons.

Both O'Donnell and Thonus point out that actually getting the cap space necessary for even a shot at a max-type player will not be as easy as some people are making it out to be. If the Bulls go into that offseason with Rose/Noah/Gibson/Butler/Teague/Mirotic/rookies, they likely won't have space for a max offer. They could certainly let go of Gibson or move Noah, but considering the options likely available to them, that could be foolish.

Basically, the "2014 plan" sucks, and people should be hesitant to buy into it. The Bulls have the resources every season to spend and put together as good a team as possible, but they don't always choose to do it. I for one wish they would try their damndest to get in on the Howard sweepstakes, because I don't think he'd actually leave, and if he did, the Bulls would have plenty of cap space in a nice 2013 free agent class.

But we know by now that the Bulls won't take that chance, and they appear content to be competitive the next few years (and they will be) before hoping for some magic in 2014. I sure hope that's not the planned approach, but I have no other reason to believe otherwise. And it shouldn't be that way.