It's been weeks of the slow, sad, frustrating goodbye to the old bench mob. The new guys coming in to replace them are not as good overall, and includes freaking Kirk Hinrich (of all the Hinrichs!). But one of the more intriguing new arrivals is Marco Belinelli.

Belinelli's actually entering his prime at age 26, and has displayed a shotmaking ability that usually the Bulls shy away from in their defense+rebounding+boringthehelloutofeveryone+DerrickRose=Championships model of player evaluation.

Earlier in the offseason, Bullets Forever looked at Belinelli as a possible target of their for the Wizards, and gave this useful scouting report:

a solid perimeter shooter that can space the floor... In the past, he was prone to poor shot selection, but he's curbed that habit New Orleans...shot much better playing with a ball-dominant point guard in his first year in New Orleans than without one in his second year.

He's also surprisingly lethal on three-pointers in transition, shooting 48.8 percent on those shots this year and 49.4 percent last year, according to MySynergySports.com.

Not a very good defensive player, nor is he especially dynamic as a playmaker. He's decent at running pick and roll to get his own shot, but his assist rate is pretty low and he doesn't get to the basket very much...There's a concern that Belinelli's weaknesses often take away from his strength as a shooter.

There you can also find a link to this SI.com interview with Hornets coach Monty Williams where he praises Belinelli's professionalism and work ethic.

I think that will be key in determining whether he can be effective for Tom Thibodeau and the Bulls this season. The player Belinelli is theoretically replacing, Kyle Korver, was also a pretty awful defender. There was the reputation that he was a solid 'team defender', but I never found that too true, and his personal limitations were exposed more against tighter playoff rotations.

But Korver did try hard and played intelligently, so combining that with his superlative (if one-dimensional) offensive skills, he got minutes. If Belinelli is to provide similar value, he first needs to first get on the court, meaning being in Thibs's good graces through at least trying on defense, and knowing the scheme.

(or, just wait until Rip Hamilton gets hurt and be out there by default...)

When he's then out there, I don't think Belinelli will be as efficient as Korver, but that's partly due to a willingness to force things out of his comfort zone. That is a double-edged sword, of course. I won't anticipate he's a great shot-creator, especially against top-level defenses. If he was, I'd imagine that coach Williams wouldn't have let him go to free agency, nor the Bulls able to sign him for under $2m. However, a bit of a gunner mentality is something the Bulls need, if only for my personal enjoyment.

Another factor of making me want to like the guy is either the misunderstanding or intentional hilarity in this column from ESPNChicago's Jon Greenberg:

Belinelli thinks he's a more complete player than Kyle Korver, and noted that Thibodeau told him "he want me so bad." But I tried not to laugh when Belinelli admitted he's not so good on defense. That doesn't bode well if it's true.

"Defensive play is not my best," he said. "I think that I can play defense and it's one thing that can be better. I can be better, but if I play and I got confidence from other guys, I think I can do better stuff than other guys."

Nothing wrong with admitting areas for improvement if the desire to get better is there. He should probably not wear this shirt seen in his Twitter avatar on the first day of Thibodeau's training camp, though... 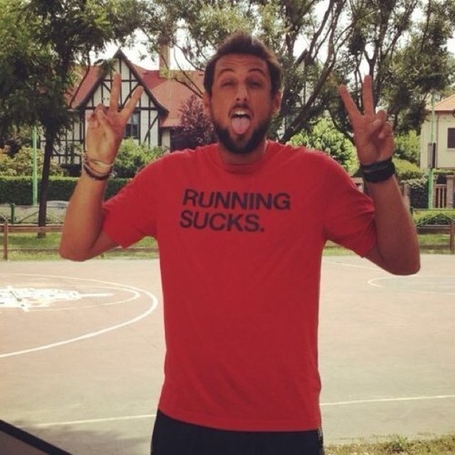